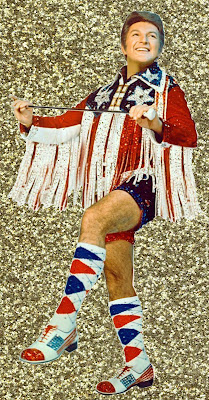 I should probably be outside eating hot dogs and setting off fireworks, but for a number of reasons, including a scary policeman at my door, I’m inside chillin with Liberace.

I’m one of those people who gets the holiday spirit in July. Just when it is hot as a hair shirt outside, I’m inside, getting my jingle bells on. Never lasts long, just enough to trigger a craving for cold weather and the smell of gingerbread. Since neither one of those things is available to me at this time, I’ll settle for my favorite holiday album, Liberace Christmas.

Confession: that Christmas stuff is misleading. Truth is, no matter what time of year, I can’t get enough Liberace. So what if I’m not his type. So what if he’s dead. I adore him.

Just look at this man! Do you see an insecure gay polish kid from Milwaukee? Didn’t think so. Why his music doesn’t play from every store and restaurant in the Western Hemisphere, 24/7, is baffling. The man was a genius. A massive, witty, giggling, fruit-filled, rhinestone-studded genius. And it’s not just that the dude could play the piano wearing cocktail rings the size of tangerines (not even kidding), the core of his talent came from his unapologetic happiness.  He didn’t just sing or speak or preach the word; he lived it. He flaunted it. He dismissed (or sued the crap out of) anyone who judged him for it. He was an entertainer in an era when people were heavily discouraged from being themselves. He was ahead of his time.

Yes, he lavished himself with material riches. Yes, he makes Donald Trump look tasteful. Yes, his music was overshadowed by the circus of his lifestyle. No, he never apologized for any of it.

I’m in love with Liberace.