Y’all, meet Ahmed. My favorite Christmas decoration.  He may not look Christmasy, but believe it or not, he reminds me of the baby Jesus in the most wonderful way you can imagine. Ahmed, in all his glitter and glory, is a Tool of Worship. 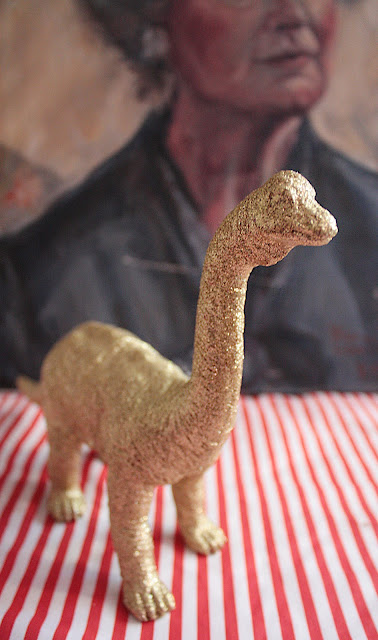 As someone whose system of beliefs runs “deep and polka dotted” the holidays make me keenly aware of our diversity in faith. Christmas time can drudge up a lot of confusion for people who fall outside to picket fences of organized religion.

Do you say Merry Xmas or Happy Holidays?

Do you get offended if I just typed Xmas instead of Christmas?

Do you get offended by people who erect a Christmas tree in their home but never bother to celebrate the birth of Christ?

Do you get offended by people who hang dreidels on the Christmas trees?

Do you sometimes wonder, “Why the hell am I up at the butt crack of dawn roasting this damn turkey for four kids who will be too full of chocolate Santas to appreciate this hard work?”

I have a confession: I’m not Aunt Peaches.  My real name is Second-Cousin Peaches. See, I don’t have any siblings, or, not in the typical sense at least. So being an Aunt is pretty much impossible.

Disappointed in me? I’m not. My niece Abigail’s Dad, Bubba, and his two siblings, Katie and John, are as close to brothers and sisters as I have ever known. We are close in age, and played and fought and sang and screamed and burped in each other’s faces the same as siblings. We even went to school together. I saw two of them just last weekend.

Abigail is named after my Mother who passed away when I was young, and who loved my cousins same as she loved me. They were, and are, my family. So when I was twelve, and they up and moved to Saudi Arabia, I was heartbroken. Years later I realized that their move was best thing that ever happened to me but that’s a story for another time.

How much do you know about Saudi Arabia? You probably know they aren’t exactly friendly toward Westerners like you and me. They keep a strict interpretation of Islamic law and are perceived to isolate themselves from outsiders in general. Its home to Mecca, which is as sacred as it gets in the Islamic system of beliefs.

Tangent: If you are not familiar with the basic tenets of Islam, but you think that everyone on the planet should know about your religion, I want you to stop reading this and click right here right now. Yes, now. Read it. Don’t worry, I’ll wait.

Look, I’m not trying to evangelize any point of view here; I just don’t think anyone has any business running their mouth before they open their ears.

My family lived on a compound that functioned in the same way you hear people describe army bases in other countries–like a small town with walls and its own school, grocery store, post office etc. Thing is, even if everyone on this private compound was American or Canadian, they still lived under Saudi Arabian law. Breaking these laws could lead deportation or imprisonment, or better yet, corporal punishment, including the public amputation of your hand or foot, or maybe just a good ol’ fashioned flogging. Getting stoned to death in the town square was a not uncommon. Fun stuff, huh?

*Folks, I’m no international legal scholar, but let me give you a few of the more memorable highlights:

* Please note my crass summary of these laws is mostly written in the past tense. I have read the Saudi Arabian legal system has come a long way in the last twenty years but I am inclined to think some things never change. I hope you’ll do your own research before forming an opinion. If someone reading this has first hand experience and would like to pipe up, well go ahead and chime in. I’m all ears.

So, given what I just said, how do you think people celebrated Christmas in a place like that? Not like you can find a contraband Christmas tree in the desert. There are no chestnuts roasting on the fire. No jingle bells to jangle. What would you do to mark the season?

You would get creative, that’s what you would do!  And that’s just what these families did. Thousands of them, every year would build Christmas trees out of cardboard and tomato cages or string lights on potted plants. Now that stuff seems trendy and eco-conscious, but back then, for them, it was the only option. Isn’t that wonderful?

My favorite story was about people building nativity scenes out of children’s toys. Sometimes they were nothing more than a manger made of a simple blanket fort with a few teddy bears underneath.  Other times they got real elaborate and theatrical; Barbie and Mr. Potato Head sat in for Mary and Joseph. Gi-Joes offered gifts of gold, frankincense, and murr, as a family of My Little Ponies looked on. Swarms of farm animals could be swapped in for matchbox cars or tiny plastic army soldiers.  Jesus was usually played by a Polly Pocket Doll, or they made him themselves out of clay.

Somewhere along the way I heard about a lady in Riyahd whose young son had outgrown his dinosaur obsession. She took the contents of his rejected toy chest, dipped them in glue and glitter, and went to town. The end result was a glittering nativity scene that took over most of their living room. They said it was wonderful. Some people might think that sounds scandalous, but I think it must have been beautiful. More important, it says something about how each of us can find a way to celebrate our family and our faith, even when we in the most unwelcoming surroundings.

Gosh, that storyline sounds familiar….reminds me of this of this baby that was born in cold dark barn, surrounded by humble creatures while worshiped by angels and kings. I wonder if there is a connection? (That’s sarcasm.)

Years passed….my family moved back to the US and we were back to tearing up the holidays with evergreen trees and A Barbra Streisand Christmas Album. (That’s not sarcasm.)

The holidays seemed much the same as always until the Christmas Eve after my father died. I was twenty and didn’t have anywhere to go. I was still in college and my friends had all gone home for the holidays and my boyfriend was working late in a restaurant. I couldn’t afford to travel to see my extended family down South. Probably just as well I was alone that night because I was really good at feeling sorry for myself. I mean, realllllly sorry. Like, Real Housewives of New Jersey style sorry. So I sat there and cried and watched It’s a Wonderful Life. Eventually I got bored and frustrated and started cleaning…one thing lead to another and it was time to take the garbage out.

Just as I got to the alley behind my apartment, I saw him there. Standing on the edge of the dumpster waiting for me, a tuft of snow on his green plastic head. It was dark outside and there was the halo of a street light shining down around.

I have never seen a living nativity but I’m pretty sure the feeling of awe and wonderment I felt in that moment by the dumpster is as close to a spiritual fireworks as I will ever know.

Sure, it was just a just toy on a trash can. Sure, it was probably just some leftover trinket some kid dropped while carrying his other Christmas loot. Sure, that snow had been projected for days. Sure, that light shined down on that dumpster to keep the rats away. Sure, there were a hundred people walking down that alley who could have stumbled in at any moment….but in that moment, in my moment, I was sure that dinosaur was meant for me.

Two minutes later, I was back in my apartment, plastic dinosaur in hand. Ten minutes later he was dipped in glue and glitter. Thirty minutes later he was situated on top of the TV, surrounded by mementos; photos, books, a wallet, a necklace, a piece of ribbon…it must have been an odd sight to see them there, piled up on the TV that night, but what did that matter? It was an inventory of the people and places I love most. Not so much objects of desire, but tools of worship.

Six month update: To my surprise, this post created some controversy.
Click here to read what happened next.

« Who needs figgy pudding?
I want a Hippopotamus for Christmas »