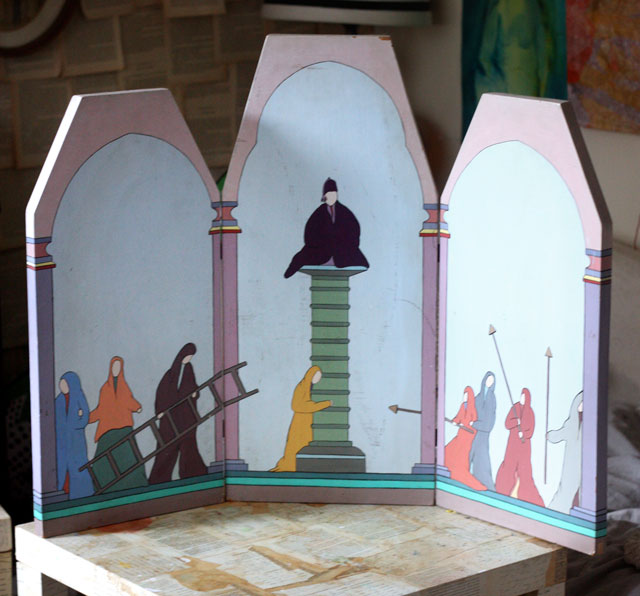 So, when I was packing, I found this amazing triptych piece my Uncle painted back in the 70’s. Fierce, no? This bad boy hung above our kitchen table for most of the 80’s until one of the cats knocked it over into a cheese casserole and that was the end of that. It’s been in and out of closets ever since.
One time, when he was over for a visit, I asked him what it was about and he said the purple guy on the pedestal was the caterpillar, (as in, The Caterpillar from “Alice’s Adventures in Wonderland”). I didn’t think much of it at the time, but now, knowing a little more about Alice, and recognizing that in the 70’s my Uncle smoked everything but his shoes, I can’t help but wonder: Um, wtf is going on here?
Half the painting is dudes with spears, the other half are dudes with ladders, then there is one lonely lady in yellow at the base of the pedestal all sad and forlorn and faceless.
What’s up with that?
It’s a good weird, but a weird weird too. It’s some sort of idol worship something I think. The idea that I ate most of my childhood cheerios under it makes me wonder even more. Who is the lady in yellow? Is Alice the lady in yellow? Why do they have their spears out? What’s up with the Caterpillar in the Shriner’s hat? Where does one even get a purple Shriner’s hat?
I just don’t know where to begin. Thoughts, anyone? What is the story here? 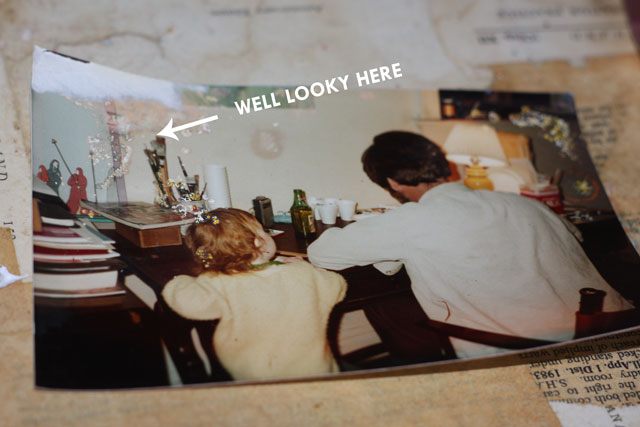 « Thoughts Upon Elmo and Existentialism
The mothership calling me home »