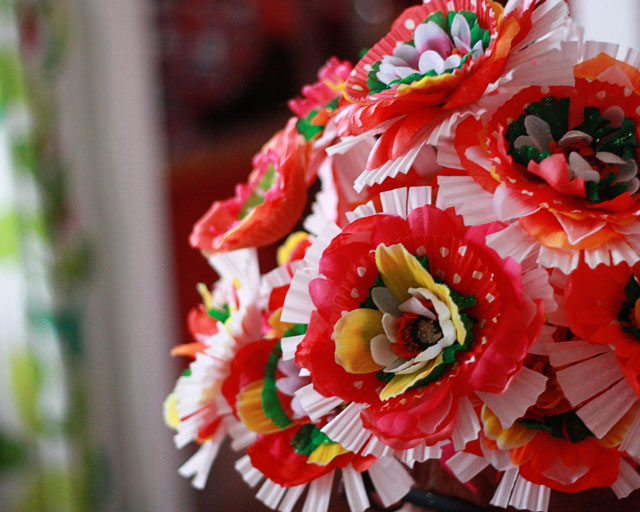 Silk flowers are a controversial subject.

Not since the OJ Simpson verdict has a nation stood so squarely divided.

Some people loathe silk flowers. They write them off as tacky, dusty, dated, and only acceptable in conjunction with gravestones and in funeral parlors. In their minds, silk flowers are best relegated to the dead.

In the other camp, there are those who worship silk flowers for their joyful appearance and economical price tag. Silk flowers last forever and are readily available in dollar stores, craft stores, and most anywhere off-brand toothpaste is sold.

But I didn’t always feel this way…

I went through a snobbish phase in my early twenties when I disliked anything that was not organic and otherwise wholesome. Man, that was annoying. At one point, while sitting down to lunch to meet my then-boyfriend’s older sister, Juanita, a woman 22 years his senior, with eyebrows like caterpillars and fingers like overcooked hot dogs, I remarked on the restaurant’s decor and their over abundance of silk flowers. With tremendous confidence I declared,  “Aren’t they just so tacky? Who wants to eat food right next to these dusty old things? They probably absorb all the food odors and bathroom grime off everyone who has ever walked through here. Gross. Gross. Gross! Don’t you agree, Juanita?”

Juanita shot me a look that could curdle milk.

I spent the rest of the lunch attempting to make friendly small talk, while Juanita donned her cat eyed reading glasses and buried her nose in her menu. Every once in a while I would see her staring daggers at me, which I wrote off as the leery eye of a concerned older sister. Typical, right?

Six months later, when I was invited to her home to celebrate a family birthday, I discovered that Juanita’s entire home was covered in silk flowers, including, I might add, a rather impressive dining room ceiling bedecked in a carpet of dangling silk wisteria.

No wonder she gave me the stank eye. 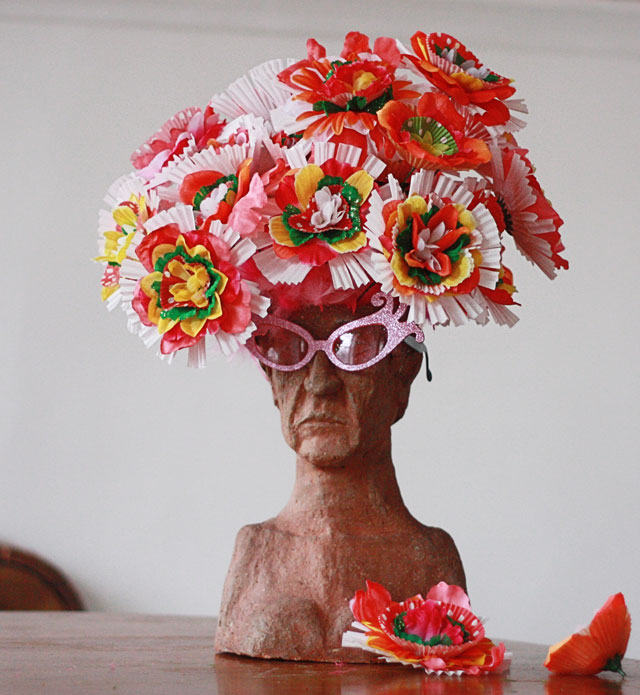 Now she is giving you the stank eye. Yield to her power: embrace silk flowers! 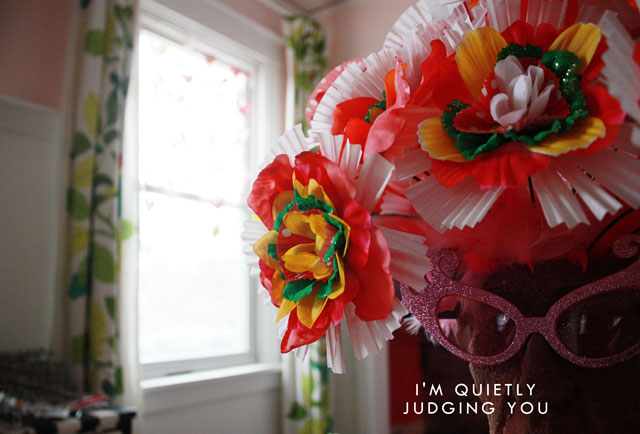 As the years have passed, silk flowers have grown on me. But I don’t really see them as a decorative item as much as a supply source. They are so much more fun when you take them apart and use them for other purposes. 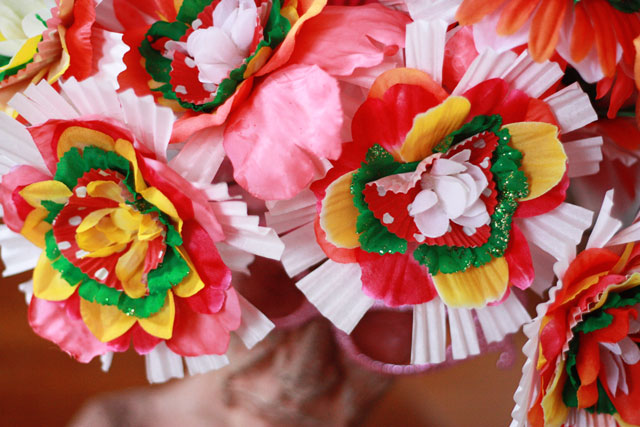 I decided to call these Franken Flowers because they are composed like Frankenstein; by taking parts and pieces from multiple places and meshing them together.

Frankenstein is also what I called Juanita when she wasn’t around.

Wow. That was complicated.

Start by taking your flowers apart. I have found that silk flowers from the dollar store come apart very easy, while nicer, fancier flowers from decorator stores can sometimes have glue blobs at their base (something to check before buying). Be sure to keep the green plastic stem things holding the flower together, which shall be known as “little green things” hereafter. 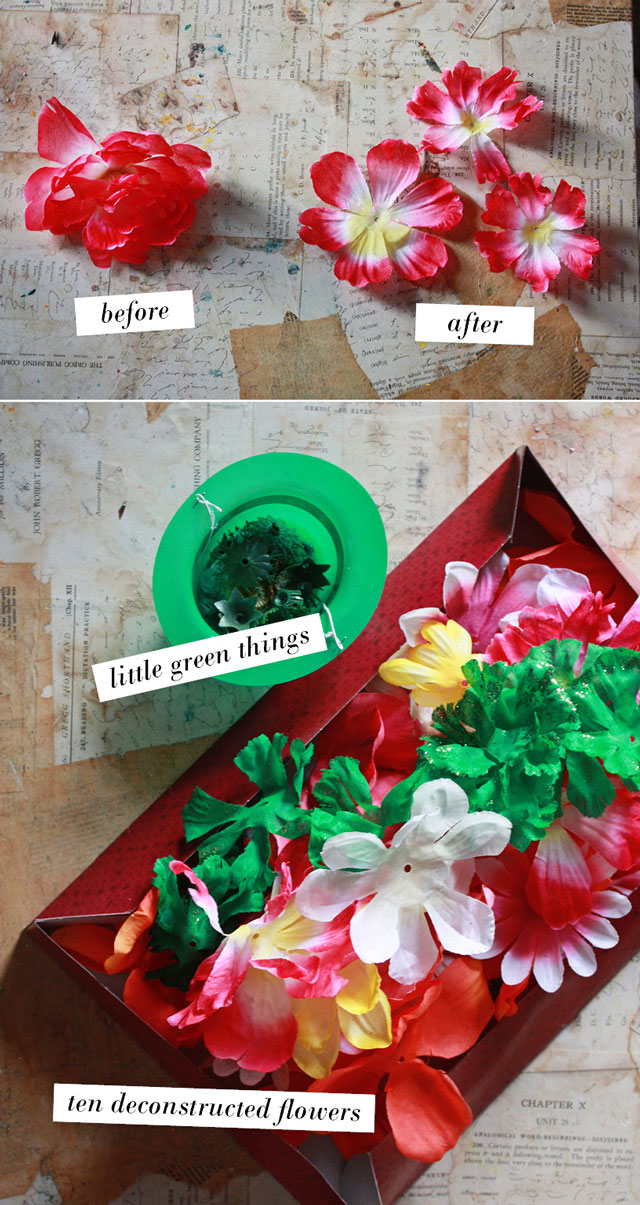 The more flowers you take apart, the more flowers you can put back together. This project would work just as well with two kinds of flowers as, it would ten kinds, but I suggest, whatever you choose, look for contrast in color and a variety of sizes to help each layer stand out.

For this sample, I pulled six individual layers of petals and laid them out in alternating colors. Then starting with the smallest flower, I slipped each layer back onto the little green thing and finished with one of the big green discs. 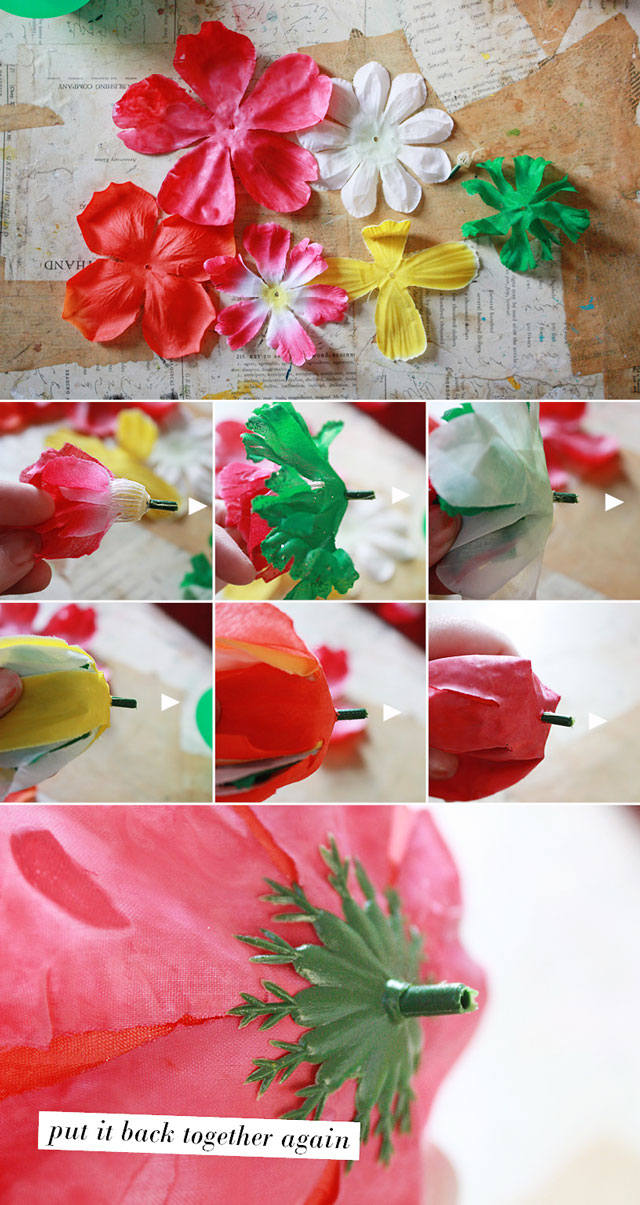 I apologize for my lack of technical terms here. I’m hoping the pictures do the talking for me. If someone has a better term for little green thing and big green disc, feel free to chime in here. 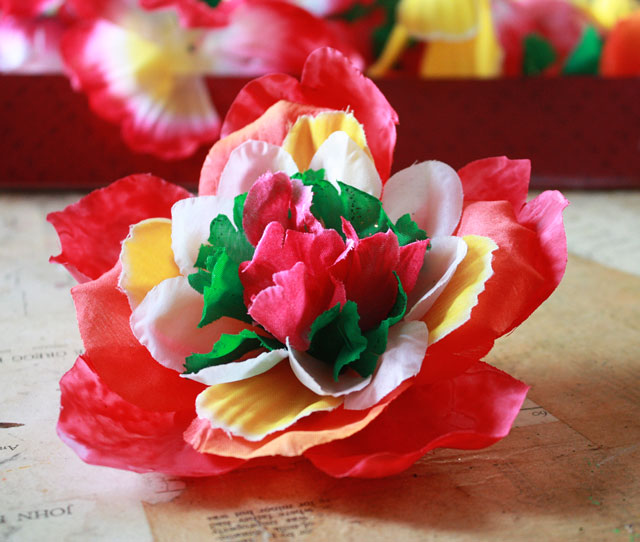 End result looks like the flower above. Neato, huh?

I think is pretty darn cool. But, just to pump up the jam, I’m going to go back and add in a couple of cupcake liners for extra oomf. 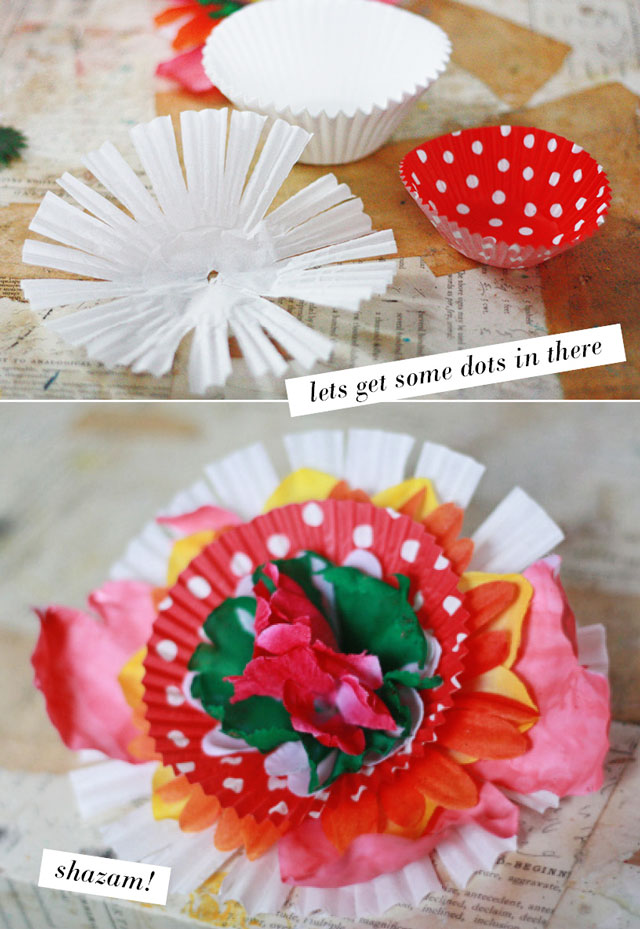 For the record: I like tacos AND cupcakes. Don’t anyone write me emails about that. My diplomacy knows no bounds.

And that’s it! No glue, no mess. For very little money and effort you have a colorful bouquet that will last for years to come. Go ahead, try it out! What do you have to lose? Listen, if you decide you don’t like it, you can always give it Juanita. 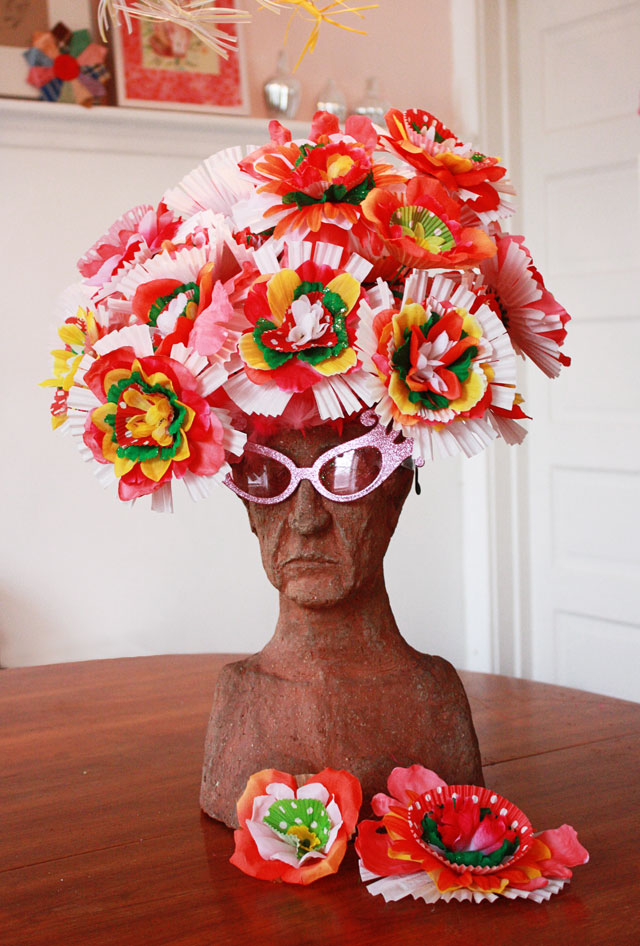