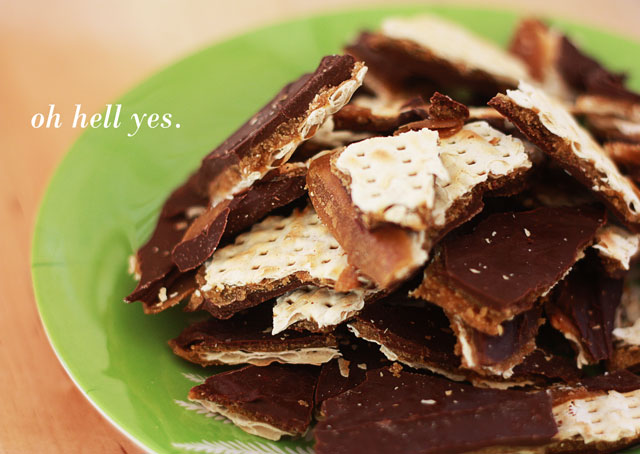 Kiki made Chocolate Toffee Matzah for Passover last weekend, and y’all, I have to tell you: it was phenomenal.
I have had chocolate dipped matzo before, and it was fine, but nothing to talk about. But this. This is amazing. And Kiki says it was easy to make and only took four ingredients. FOUR ingredients. It’s sweet and salty, crunchy and chewy in every bite. And it took FOUR ingredients.

If you have never had matzo before, let me break it down: Matzo/Matzah is the unleavened bread traditionally eaten by Jews during the week-long Passover holiday. It looks and tastes like a giant cracker. Like most good things in Judiasm, it has multiple spellings. You can find it on clearance at your grocery store right now. You should totally try it.

Why do Jews eat matzo for Passover?
As the story goes, after the tenth plague, when pharaoh released the Hebrews, they were so hurried to escape Egypt that they could not pause for the dough to rise.  Hence, at Passover, Jews eat matzah and avoid all forms of leavened foods (most anything made with flour, yeast, wheat, etc.)
Art History Factoid: The books of Mark, Matthew, and Luke all describe the Last Supper as a Passover Seder, as so famously depicted by Leonardo DaVinci, and later, Giampietrino (below). But something is wrong with this picture. Do you see it? (click for larger image) 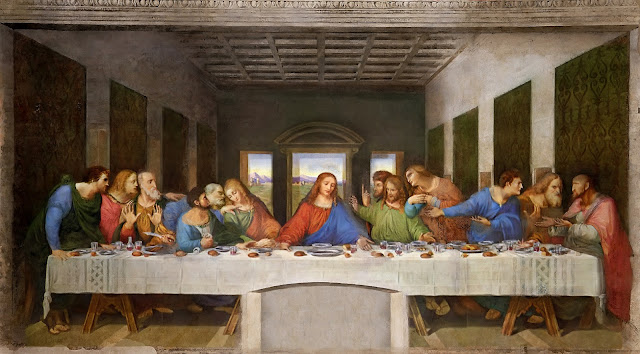 What the….
Are those Pillsbury biscuits? There is no way Jesus would have been eating bread (like that) at the last supper. So now you know, and you can go and be the smartest person at the Seder table. You’re welcome.Happy Passover. Or Easter. Or whatever season you celebrating. May you celebrate it with joy and chocolate.Next year in Jerusalem!
« Postcards from a Hoarder: Easter Baskets
Shameless Self Promotion »