I was busy making a Friday Flower project last night when it took a turn for the worse. I am still hoping to resurrect it from the bowels of craft failure, but until then, the best I can give you is a sneak peek: 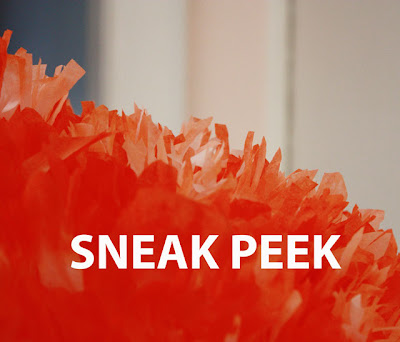 The extra large letters makes it seem purposeful, no?
It’s orange. Almost Muppet-like. That’s as much as I will tell you right now.
You will have to forgive me for running behind. It’s been an odd week around here…

The NATO summit takes place in Chicago this weekend and protesters have been pouring in for days. It’s weird. Sometimes I see them clustered in sleeping bags under the train tracks. Sometimes I see pictures on the news of the riots that took place at previous NATO summits and think, How could these people in sleeping bags be preparing to set fires and loot and throw bags of poo? They just want to get their point across. They just need their voice to be heard. We should be saluting them for their determination to speak out for the little guy. Where is our tolerance?

Then yesterday on the train I looked down at one of the clusters of sleeping bags and saw a guy going to the bathroom into a bag.
And there goes my tolerance.
Will the contents of that bag end up smeared across some corporate bank office window? Or thrown at a policeman’s riot shield? Or peacefully into a garbage can (most of which have been removed to ward off small bomb threats)? I don’t know. But holy cats, I’m glad I don’t live anywhere near the summit location this weekend.
Even just working downtown is eerie right now. Helicopters everywhere. Trains are half-empty today. Not a suit in sight. Everyone, including my boss, instructed workers to “dress down” this week and work from home on Monday.  Some glass-front buildings are boarded up. The jewelers and high-end retailers have emptied their windows. It’s spooky.
My office overlooks a plaza in the center of the business district, which apparently is some sort of target. I’m not sure if that is because of the central location, or because it is the front yard of a giant bank headquarters, or because the plaza is owned by a much-despised energy corporation, or because it is the only open square downtown not located on government land*…but it is currently under guard something fierce.

*Something they don’t teach you in Kindergarten:  If you are going to commit a crime, like defacing property etc., avoid doing it on government property because, if/when you are arrested, the sentencing will likely be harsher than if you committed the same crime on private property. At least that is what my Anarchist lawyer friend informed me on Facebook last week. And yes, there are Anarchist lawyers. Weird, right?

One of the nicest things about my office is that the view includes The Four Seasons, a giant mosaic by Marc Chagall. I like to come out here at lunch to read a book, or chat with co-workers, or eat my salad and people watch. It’s my special place. I share its specialness with hundreds of other people, though. This is how nice I am.  I share and such.
But today the plaza is blocked off, so I am eating inside, writing this blog post, and mad as a box of frogs just thinking about how they had to board up my beloved mosaic. Just look: 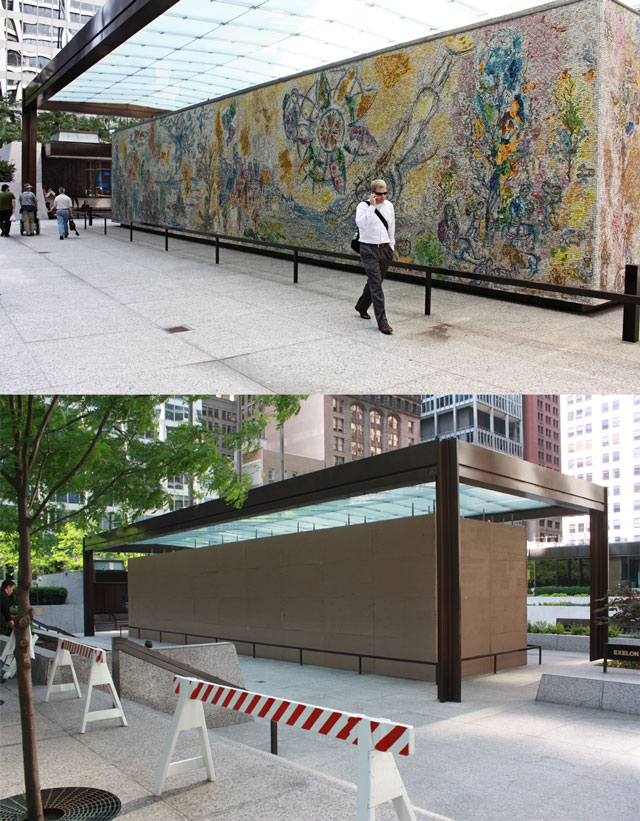 I know it is just a precaution, but still… it’s a sad day when a 20-ton work of art has to be protected from the public. Just looking at it puts me on edge.  Between this, the police presence and the non-stop drone of helicopters, I am anxious to start the weekend. At home. Away from Crazytown. With the cat. Busy beavering away at another art project.
What are you doing this weekend?

Looking for something fun to do or read? Here are some of my random favorites this week:

« Dear People Who Used To Live Here
Postcard From A Hoarder: Gift Bows »