Dear Hobby Lobby,
As an avid crafter and long-time Hobby Lobby shopper, I am disappointed by your recent choice to sue the United States government. Your suit claims that you do not want to follow federal law by providing your employees with health insurance that would cover emergency contraception, because, as you say, “These abortion-causing drugs go against our faith.”
Hobby Lobby, here are a three things I want you to know.
1. The morning-after pill does not cause abortions. It prevents pregnancy from happening in the first place. It stops ovulation and inhibits the egg from implanting in the uterine lining. It does not tinker with an embryo that has already implanted. It does not abort a fetus.
Yes, I realize a lot of men like to believe that life begins at the very moment of male climax, but as any woman can tell you, that is not the case. Sad face, right?
In emergency situations, the morning-after pill is a necessary measure. Thousands of women rely on it every day to control their family planning. It is possible that some of them are amongst your 13,000 plus full-time employees.
How do I know that the morning-after pill is not an abortion? Because I have had occasion to use it myself. I have also taken the time to do my homework, read the scientific research, and asked several of my friends in the medical profession to share their thoughts. Just now, I even asked my dear friend Maureen, who is a doctor—and a conservative-minded Christian one at that. Our conversation went like this: 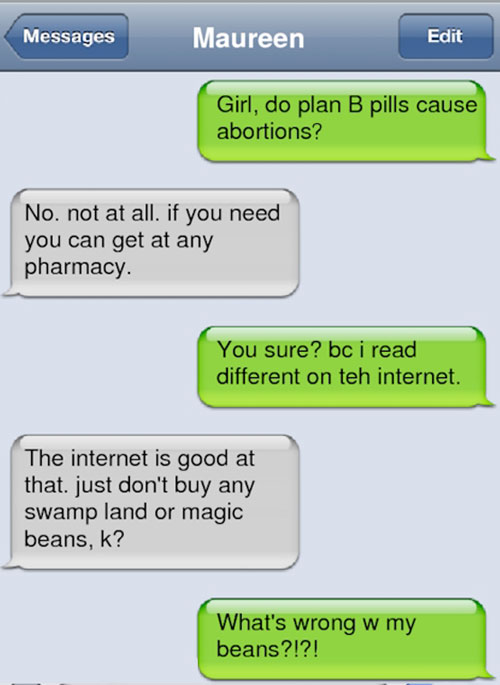 And here is a kicker for you: Plan B works the same as daily birth control, aka “the pill,” just in more concentrated dose. Hobby Lobby, how many of your employees are on the pill? Urmmmm, a lot.

Let’s review; pregnancy occurs when an egg implants and sticks. Period. (No pun intended). (And you can research the definition on your own time). If you are filing a lawsuit to get rid of one of these medications you should probably get rid of both. The main difference is timing and cost. The pill is pretty cheap, but Plan B runs around $65 a dose in my neck of the woods. For someone working an hourly retail job, $65 might be the difference between groceries and gas money (I speak from experience here).

Now, I can see why you might be confused. Yes, there are some pills that can cause abortions. As the Mayo Clinic points out “Keep in mind that the morning-after pill isn’t the same as mifepristone (Mifeprex), also known as RU-486 or the abortion pill. Mifeprex terminates an established pregnancy — one in which the fertilized egg has attached to the uterine wall and has already begun to develop.”

But Mifeprex is not covered in the mandate mentioned in your law suit. So, gosh, this is awkward.
Sorry Hobby Lobby, those are the facts. I believe in facts. You may believe in something different, and that’s okay too. Facts will be around longer than both of us.
2. By opposing the morning-after pill, you are opposing a simple form of contraception. Your lawsuit claims that this is a violation of your religion, which I don’t buy (see item 1) but okay, fine, you stick to it. Hold your ground. Keep your magic beans. But the thing is Hobby Lobby, you, as a corporation, are not your employees. You do not make family planning decisions for your staff. You have every right to hire and fire employees as you see fit, but, you do not have the right to dictate what those employees do with their bodies when they are off the clock.
I know what you are thinking Hobby Lobby, “But why should we have to pay for these women and their choice of life-style? Can’t they just pay for this stuff themselves?”
Good points, Hobby Lobby. My employer asks a similar question every time they have to pay out for one of my colleagues who receives Type II Diabetes medication, or treatment for lung cancer, or someone’s Viagra, or vasectomy, or any other medical treatment caused by “life-style choices.” That’s the way insurance works. It’s all-in. Nobody gets to pick and choose coverage based on what they see fit and moral. You don’t get to punish your employees by holding back medication because you don’t agree with their life-style choices. Your lawsuit aims to set legal precedent that would prevent other US employers from covering contraception in their benefits package, and that is not cool Hobby Lobby. Not cool.
3. As a craft blogger and creative professional, I spend a lot of time in craft stores. A lot. Probably ten times more than anyone else I know (except for my other craft blogging friends, who are all reading this). I have to cross three other craft stores to get to the nearest Hobby Lobby, and I used to do it on a regular basis because I liked the way you do business. Your stores are always clean, well-stocked, and your employees know their stuff better than most. Yes, the Glitter-Me-Jesus figurines are a little freaky, and sometimes your music is weird, but hey, we can’t all be DJs. All in all, over the years, I have spent a good deal of money at Hobby Lobby. As of yesterday that is over. I will not support a company that would deny its employees the ability to control their reproductive organs. I will not be shopping at Hobby Lobby anymore.
Furthermore, I am going to tell all my family, friends and colleagues about what you are doing with this lawsuit. I’m going to tell all my blog friends too. There are a few thousand of them dropping by every day. I don’t expect all of them to agree with me, but I do expect that they will think about it. And yes, I’m hoping they will think about it as they are driving right past your store to head over to Michael’s, or Jo-Ann’s, or AC Moore, or Ben Franklin, or any of the other wonderful craft retailers who are observing their religious beliefs in their hearts and not in my biscuit.
Warmly,
~ Aunt Peaches
If you are a Hobby Lobby customer and have an opinion on this issue, why don’t you take a moment to tell them about it.

Before publishing this post yesterday I asked a friend to read it to make sure it wasn’t totally off-base or offensive. She said it was.”Do you realize that you could lose half your readers by posting this?”

Yes. And that was a risk I was willing to take. However, to my amazement, the opposite has taken place. It appears that I have lost a few readers and gained many, many more. The overwhelming tide of support is startling. That was not expected.

I want to take a second to say thank you to everyone who is taking the time to weigh in — on both sides of the debate. Thank you for telling your friends and sharing on facebook and writing emails to the folks at HL. Consumer buying power is one of the only tools we can use to see change. Lucky for us, it is also one of the most effective.

I also want to note that a number of people have sent emails to me directly because they don’t feel comfortable commenting on this subject in public. The fact that they felt compelled to email is wonderful, appreciated, 100% understandable…and precisely the reason I wrote this post. Some things need to be said…in public. No one should have to feel bad about speaking their mind. Progress will never happen if folks are too afraid to say what they know to be true.With that in mind, for a while here, I will be turning on my comment moderation. All comments will be published whether I agree with them or not.However, any mean-spirited remarks, particularly those in response to other commenters, will not be published. Period. I’m not asking you to agree with me, I’m asking you to think about it before you write it down. Who knows, if we each can say what we think and be respectful about it, we might just find some common ground and find a way to move forward.

**Update five months later, Feb 10, 2013, one month after the law was to go into effect.Several people have asked me about the current status of the lawsuit, and while I am not an attorney, I’ll tell you what I know in a nutshell: Last fall, the district court deniedHobby Lobby’s claim as a religious institution, so then HL appealed to another court which is, currently, essentially, in limbo. You can read more about it here, although none of it really matters right now because HL hired lawyers to find a legal loophole that allows them to reset their insurance calendar back many months, thus proving time to wait out the court system and avoid $1.3 million dollar daily fine. So that sounds fun. If you would like to see a list of for-profit companies who have suddenly become religious institutions to avoid paying for their employees health insurance, take a gander over here.

Also, unfortunately, many comments below were lost when I switched commenting service providers in January 2013. I apologize if yours was deleted or became “unthreaded.” Comments on this post are now closed.