Raise your hand if you get annoyed by craft bloggers who suddenly turn into political commentators every other November.
I see a lot of hands.
What the…Hey, mine is up there too! 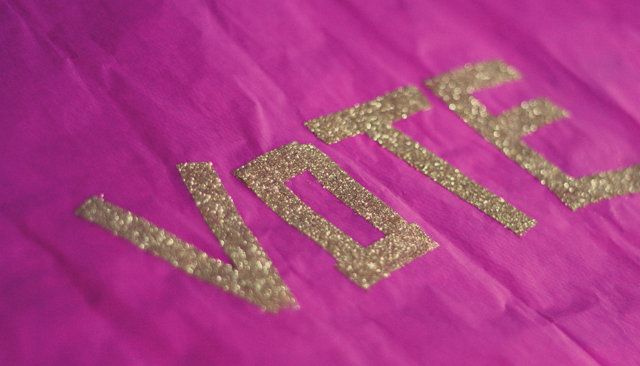 Imma vent.  There are two big things that tick me off every election season and if I can’t talk about them on my own blog, I am not doing it right.
1. Why do people assume we think the same?
Want to see a toddler go into a full out melt-down? Tell him he is tired.
Want to see me go seven kinds of crazy? Tell me how I should vote.
If a politician wants to ask me for my vote that’s fine. It’s their job and someone has to do it. And telling me how and why you are voting is great too. Assuming you can keep it brief, I like hearing how you came to that conclusion. Even if I don’t agree with it, my perspective is broadened by hearing it.
But assuming I share your opinion without asking me for mine? Oh Hell No.

and for another thing…

2. Why don’t people vote?
Even in a presidential election year, less than 60% of Americans vote. Do you know how crazy that is?
Do you want to know why I vote?  Because of money. Namely, my money. Not because it’s a sacred act of freedom, but because over the course of my lifetime the government will take 1/3* of every dollar I earn and I’ll be damned if they piss it away on beer money. If I have to spend more money on the government than I do on my own retirement, you had better believe I will be paying attention. Furthermore, I deserve a say in how they spend it.
How do I get a say? I do my part to keep assholes out of elected office. I vote.

*Tangent: Yes, roughly 1/3 of my income goes to the government. No, I am not rich. Last time I calculated in 2008 it was 38% to be precise.  This includes typical paycheck deductions, plus the dollars spent on the taxes of other living expenses like utilities, insurance, real estate, groceries, retail items, etc. Literally, 25% of my cell phone bill is taxes. What is wrong with this picture? Granted, I live in Illinois where taxes run a little higher, but I can say with confidence that most of middle America falls in the general ‘one third’ window. Sit down some month and figure it out for yourself. It’s an eye opener. And here is the thing; anyone who tells you they can lower your taxes and put more money in your pocket is either, a. lying, b. really bad at math, or c. taking that money from somewhere else (in essence “borrowing from Peter to pay Paul”). Neither political party has much swing in how these things shake out, at least not in Washington, and certainly not in the White House. The sad truth is that’s just not how laws are made. How are laws made? Click here for a sing-a-long refresher.

Tangent on a Tangent: Yes, I know everybody likes talking about the presidential races, and that’s exciting, but we need to remember that’s not how the sausage is made. Presidents have tremendous influence but the actual guts of legislation get decided on Capital Hill. If you can’t name your congressional representatives there is a distinct possibility your money is being represented by someone who isn’t doing a very good job. Someone who doesn’t have your interest at heart. But honestly, why should he? Why should he have your interest at heart if you don’t even know his name? Man, what an asshole, right? Actually, today would be a great day to pay attention and find out what particular breed of asshole he is. Or she is. There is no gender gap when it comes to acting like a jerk with other people’s money.

Speaking of gender gap, here are three interesting facts that have come to my attention in the last two weeks:
If you are one of the many folks who are still deciding, take a few minutes to check out THIS WEBSITE and decide for yourself. Project Vote Smart a legitimately non-partisan organization that provides information about every candidate running for federal and state races.
Whew, vent over! That was fun, huh guys?
And just remember, if all else fails, raid the polling station Wednesday morning and grab all the corrugated signs you can carry. They make for excellent crafting.
Happy Election Day 🙂
« No-Sew Mini Skirt Pillow
Apple Orchard Centerpiece: Dramatic and Dirt Cheap »