This weekend was an exercise in elf-like triumph.

Putting up trees, making a pajaki, ornaments, wreaths….candles blazing and Donny and Marie blasting out Jingle Bells all through the night. Anything that stood still has now been tinseled, feathered, or sequined. Only the bathroom remains untouched.

Not long, Bathroom, not long.

I’ll be posting pictures and projects in the weeks ahead, but I want take a minute to say this one thing now and get it out of the way because some people in real life think this is not normal and I am tired of explaining it. So let’s just say it now: I have multiple Christmas trees. 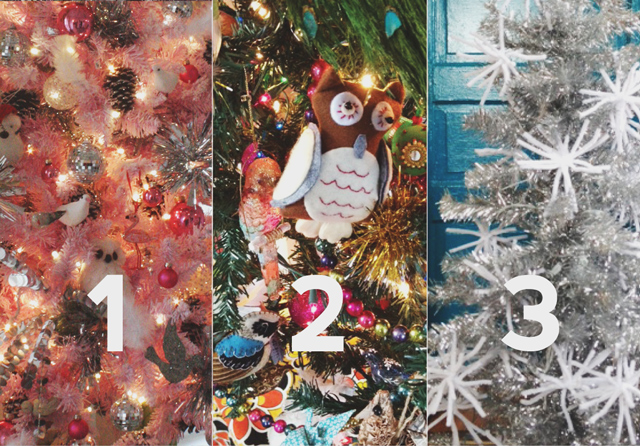 To be precise, I have three Christmas trees; a traditional green, pink flocked, and a smaller silver tree, all of them synthetic.  Some people don’t like this. Some people insist that the only Christmas tree worth having is one big natural evergreen, tall and fragrant, bedecked in generations of lovingly curated ornaments. I have had a couple of people tell me my way of doing this with multiple fake trees is flat out wrong. They say that I am buying in to the “War on Christmas” by furthering commercialism and distancing myself from traditions of Yore. And they might be right. But at this point in my life, do I give a rip?

There is a time for harkening back to Yore. There is a place for Tradition.  That place in not my living room. I love it hanging with Yore and Tradition in other people’s living rooms. Just not mine.  Trust me, it’s better for everyone involved.

See, the thing is, five years ago, if you had told me I would have not only one but three Christmas trees in my home, I would have written you off as crazy. As much as I enjoy the holidays, I have not always liked trees, at least not in my home. I like wreaths and garlands and the general idea of Christmas spirit. I like holiday parties and carolers and the general concept of brotherhood of man. But Christmas trees?
Meh…
For one thing, Christmas trees used to make me a sad. For a number of years growing up my father refused to have a Christmas tree in the house because it reminded him of my Mom, who loved, loved, decorating for Christmas. After she died the very thought of opening those boxes was too painful for either one of us to bear.  And frankly, Christmas was never his thing anyway. One time when I was away he just went and threw everything out with the trash. Sometimes I wish I had those ornaments, then, other times, I think how thankful I am that I don’t have to drudge up all that emotional baggage every December. That kind of sentiment weighs far heavier than any fruitcake.
And, for another thing, I was burned out on Christmas for a while there. Until a couple years ago I used to be one of those people who got paid to put up other people’s Christmas trees (word up: not nearly as swell as it sounds). It was a lot of late nights standing in bank lobbies holding extension chords between my teeth, or standing on restaurant bar tops on Thanksgiving morning, using zip ties to attach garland to ceiling fans. No sentiment there—just some balls and bows and religiously ambiguous tree toppers. No doubt, this is why I love my hippo.
To the best of my estimation, excluding the homes of friends and family, I have set up over 300 Christmas trees. This includes one weekend at a department store where my only job was to string lights on 43 trees. The bows were another persons job. And the garland, another. And the base ornaments, another. And the eye-level “razzle ornaments” belonged to another. And the eye level “dazzle ornaments” belonged to another. And another. And another, and so on and so on. Don’t get me wrong — it was a great job and I was lucky to have it, but you can imagine how my current three trees seems like nothing compared to the past. My Yore might be different from your Yore. I hope we can be cool with that.

I think everyone should consider multiple trees. Maybe one to host a collection of ornaments, and maybe just one because it smells good. Or it lights up a dark corner. Or because you feel like having it around. There is no law that says a person is allotted one tree in life and I am not about to follow someone else’s arbitrary rule just because it is what they know to be familiar.

My house. My Christmas. My trees. All three of them.