So, last night,  I’m cooking in the kitchen and I’m watching The Real Housewives of New Jersey in the living room.

This scenario would all be fine, except I was doing these two things at the same time and the two rooms are 15’ away from each other.

You know what happens…one minute I’m watching this guy call his sister “scum” for trying to destroy his marriage, next minute Scum Sister’s husband gets wind, storms in, and demands an apology (RAWRRR!!!), and next a fight breaks out between the two. Of course, to add drama, the editors at Bravo did that thing where they make screen go black but keep the sound going. Very compelling. All you can do is envision this uber suspenseful Rocky Balboa-like fight, when in reality, it’s just two short men in Ed Hardy shirts bucking around on the carpet of a rented conference room. Obviously, I could not turn away. At least not until the fire alarm went off. 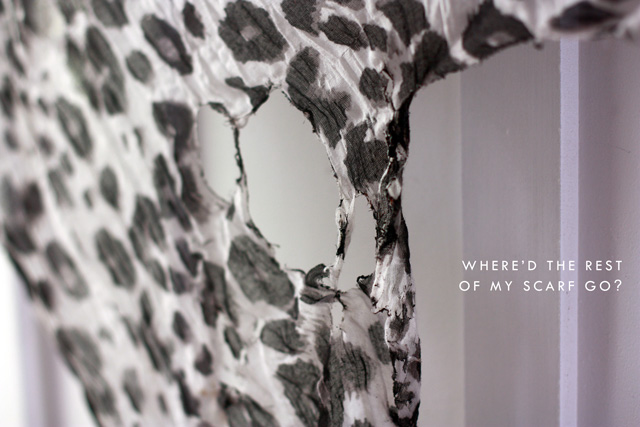 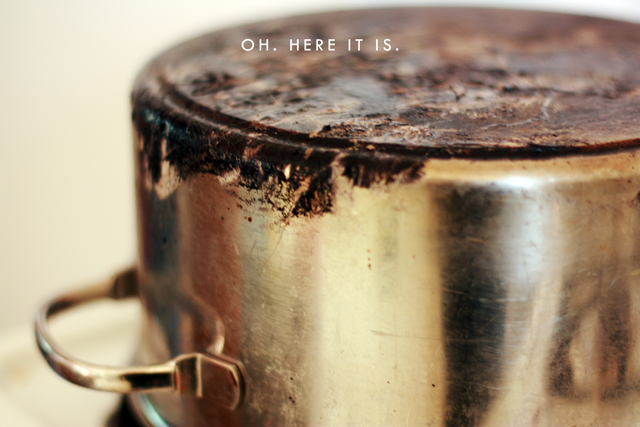 I can get over the scarf, but the pot…I really like this pot.

It’s huge and heavy. My parents bought it in the early 80’s. I have purchased a couple of different stock pots over the years, and none cook half as well as this one. This one is a keeper.

So the question is; Can it be saved?

If you had asked me a week ago, I would have assumed that scarf was 100% cotton, but the way it melted to the pot I think it must be part polyester. So how does one remove melted polyester from  stainless steel? Scrubbing with baking soda/steel wool/ajax/dish crystals has not worked. Soaking overnight in a tub of sudsy water has not worked. WHAT WILL WORK?

Does anyone out there have experience on this front? If anyone would know, it would be you guys.

Input wanted on this one.

I want my pot back.