How is it September already? How?

Summer and I barely got to say hello to each other, much less hang out. We were supposed to spend enough time for me to get sick of all the heat and laziness and think, Man am I ready for September.

That soooooo never happened. I’m not saying I was short-changed, I’m just saying I cannot be alone in feeling Autumn has come to soon. She is way too early, and if it were up to me, I’d make her wait in the parking lot a while longer. Just sayin’.

Well, anyway, here we are. Since I spent most of the last month posting about other people, maybe now is a good time to catch up on some stuff on the homefront. For example, this is a list of 25 things I wanted to accomplish this summer: 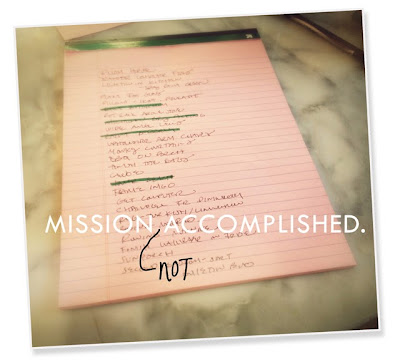 I crossed of four.

Damn if I’m not an overachier.

One of the four things was to paint my bathroom. It was supposed to be pale gray. 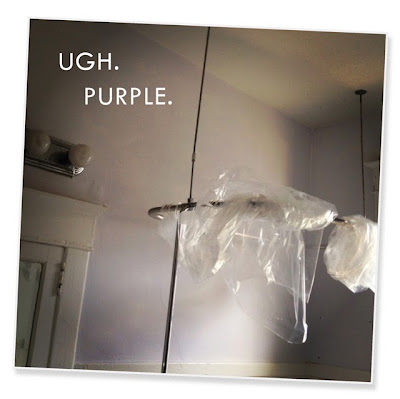 It came out purple. Lavender, I suppose. I’m living with it because I’m too lazy to deal with another round of crappy painter’s tape that falls down after ten minutes, or seven seconds before the roller hits it, with me on a chair wearing dirty overalls and screaming, ARE YOU KIDDING ME PAINTER’S TAPE? YOU STOP STICKING WHEN YOU GET PAINTED ON?

If I ever get arrested for murder, there is a good chance inadequate painters tape drove me to it. Temporary insanity, my ass.

You know who must have had great painters tape, and probably just great house painters in general? 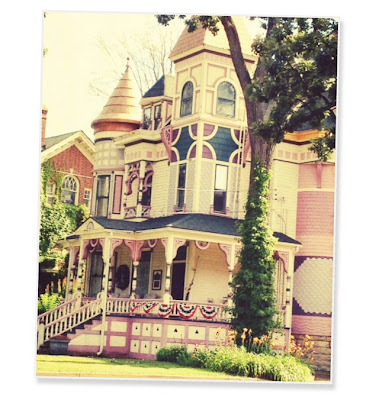 I have decided that it is Villa VilleKuella (where Pipi Longstocking lives). This one is in Elgin Illinois, and not Sweden, but whatever. I walked up to take a picture and I heard someone playing an accordion inside.  And there was a horse on the porch.

Okay, that thing about the horse is a lie. But Pipi lives here and that is that.

In the genre of crossing things off lists, one of my life list goals was to see one my photos of my home in a major magazine. The good news is the wish came true (and special thanks to Maegan for letting me know!)…the bad news is the magazine failed to credit me or seek permission beforehand. Yeah, so that was awkward. There isn’t much use in getting mad at this point, and it’s still pretty nifty to see my image featured full page. It’s a tick on the list, right? Right. 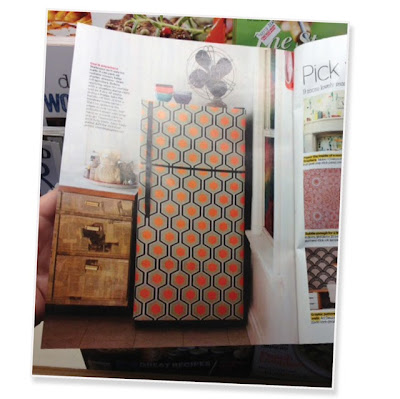 In other adventures, I went on a season-long thrift store binge. By conservative estimation, I went to more thrift stores in the last month than the whole of last year combined. It has been glorious and I can’t wait to show you all the treasures, starting with this chair: 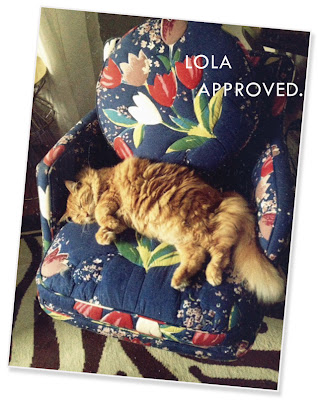 At first I was worried it was too granny, but then I asked on Instagram and Meld193 said “Vera” and that was it. If you told me an old camo print turd bag looked Vera I’d buy it. I have no control. Lola confirmed this was a good decision though when I got home and she chose it as her new favorite place to showcase her magnificence, as demonstrated by the photo above.

Then, last weekend, while buying three blue and white ginger jars at Goodwill (my latest obsession), I got into a conversation with a gal over the subject of reconstructing old jewelry which turned into a conversation on craft blogs which turned into her reccomending a few of her favorites…this and that and another one that sounded really cool and “Oh, Aunt Peaches. You might like her. She’s really far out there!” 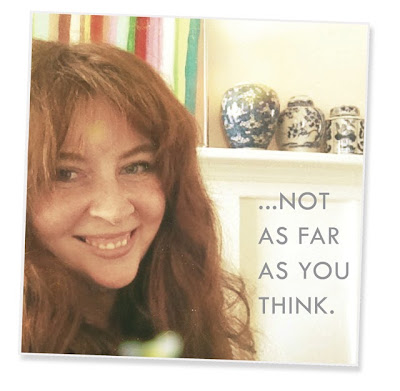 So, that made my day.

Let’s see…what else? Did I mention I’m going to Switzerland this month? Yeah. SWITZERLAND. Maybe we’ll do a quick jump and jive over to Italy of France, because when you are in Switzerland going to Italy for the day is like saying “I’m going to the mall before parking gets bad.” I’m a little bit paranoid about altitude sickness but I’ll deal with it. And by deal with it, I mean eat a bunch of croissants.

Despite my failure to make much headway on legit goals, I crafted the crap out of August so you’ll be seeing all kinds of little projects in the weeks ahead. I don’t want to spoil it for anyone, but there may be more pom poms.

« Prance for Me
Precious Bucket of Hot Pink Zen »