New crazy dining chairs to go with my old crazy dining room. It feels like Kermit the frog threw a party in here. You know I love it. 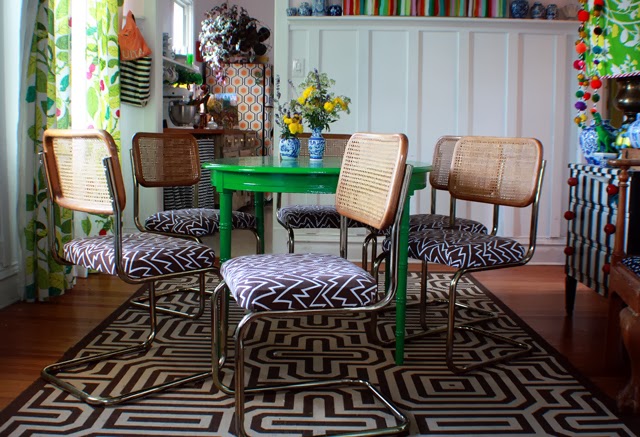 Before I start in on this, I want to address the fact that I am fully aware 80% of the people reading this post will look at these chairs and think, Bajeebuz, those are some fugly 80’s chairs. Why’d you take those from the garage sale? Fool, you coulda gotten ten Beanie babies for what those chairs cost!

Bottom line, I love them. Some people won’t ever see them as anything but garage sale cast offs, and that’s okay.

What they do not realize is that those chairs, are Cesca chairs. They are not from the 1980’s, they are from the 1920’s. Designed by Marcel Breuer in 1928 (named for his daughter Francesca), the genius in the design is the frame – one long continuous tube metal tube. An engineering idea so simple, it’s stupid. Yet all of civilization went by until 1928 when Breuer thought of it. That’s why they are amazing. No joints. No fuss. Cesca chairs are still considered one of the pinnacles of Bauhaus design and you will find them in the Museum of Modern Art. Oddly enough, they were never patented so there no such thing as a “real” Cesca, which is perhaps why they are not more collectable. Knoll has kept them in production for decades and currently sell Cesca chairs for $725 a pop.

Last August, when I saw the whole set of six Cescas at a thrift store for $65, I nearly exploded. Look, they aren’t Knoll, and the caning on the seats has been replaced for cloth, but it was still a major bargain. Major. And brass. Dull late 70’s brass. I love dull late 70’s brass like Jonie loves Chachi.

When the sales clerk came to over to tag the table for delivery, she said, “Wow what a cool table!”

To which replied, “You can keep the table and sell it to someone else, I just want the chairs.”

“Wait, you want the chairs?” 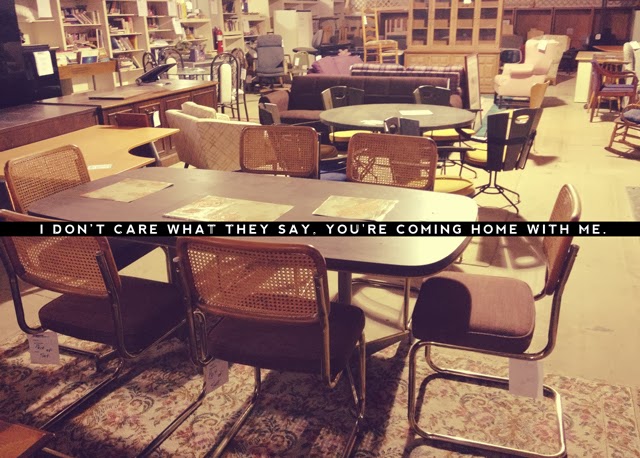 You can think they are ugly, I can think they are beautiful, but good design is good design. More important than all of that, they are also crazy comfortable. I am a major stickler for comfortable furniture. It’s a big deal to me. Too big, perhaps. Sometimes it gets me in trouble. People think I’m rude because I would rather stand or sit on the floor than sit on an uncomfortable sofa. That’s me and my judgmental butt, sitting on the floor, and we are cool with it.

One of the reasons I know these chairs are comfortable is, surprise-surprise, we had them when I was a kid… 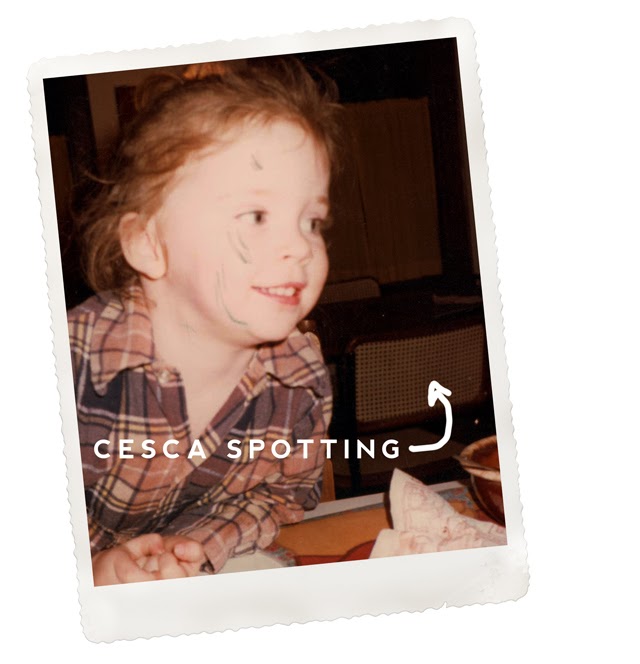 I was hoping to find a picture of my mother sitting in a Cesca, wearing an ultimate 80’s Laura Ashley high-neck ruffle blouse, in red plaid perhaps. No luck. Just a blurry shot of me as a toddler with marker on my face (but at least I’m holding down the plaid front!) 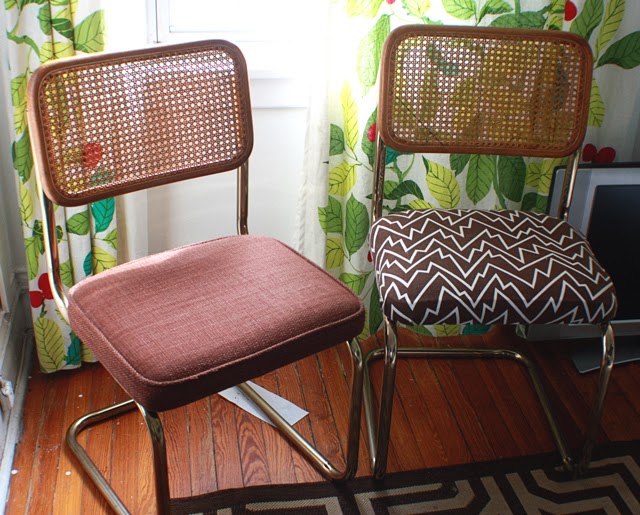 My new-old chairs came with some brown wool seats that were in surprisingly good shape. Part of me wanted to recover them in leopard but I held back on account of the geometric rug. It might have been the first (and last) time I turned down an opportunity for leopard.

Instead I used a chocolate and white cotton/linen table cloth I had in my closet for years. Another thrift store score. The font on the tag makes me think it must have been from the early 70’s. which I sort of love because I can imagine someone on the Brady Bunch wearing it as a pant suit. The pattern-on-pattern thing looks a little odd camera here, but it looks pretty awesome in real life. You’ll have to take my word on that one. Slight problem. Fitting six chairs under the table at all times isn’t an easy squeeze. Pulled out, with people sitting, they fit around fine…but pushed under for everyday is a problem. For now I’ll just set four chairs at all times and keep the other two on the sun porch. It’s not like I hardly ever have call to use six chairs anyway. The green table (which was free + a coat of paint and varnish) will be on my list of things to replace someday. Something bigger, longer, with wide set legs. Maybe a wood table with flamingo pink legs? Less Kermit – More Piggy.