Follow up to a post earlier this summer wherein I mentioned I did not have a real bed. Mattress/box spring – yes. Bed, per say –no.

Update: I now have a real bed. It’s a hand-me down Ikea bed from a friend and I totally love it. Modern. Sturdy. Free. Even better – it’s low to the ground and doesn’t require a box spring (ie critter trap). Do you know that a mouse can build a nest inside a box spring and live there for months without you ever knowing? I speak from experience here. Don’t even ask. I can’t talk about it without taking a shower.

Anyway, as much as I like the bed, it’s simple and the headboard isn’t tall enough to see. So, instead of a Morrocan Wedding blanket headboard and went for a suzani wall hanging instead. Initially I was going to use the suzani to upholster a DIY headboard, but later decided to make it a wall hanging so I don’t have to worry about pillows rubbing away the stitch work, or fabric dye coming off on the sheets. It’s a work in progress but I’m pretty happy with it. It adds some Central Asian flair to the room. Can you even imagine if I get some ikat pillows going on? Yeah dawg. 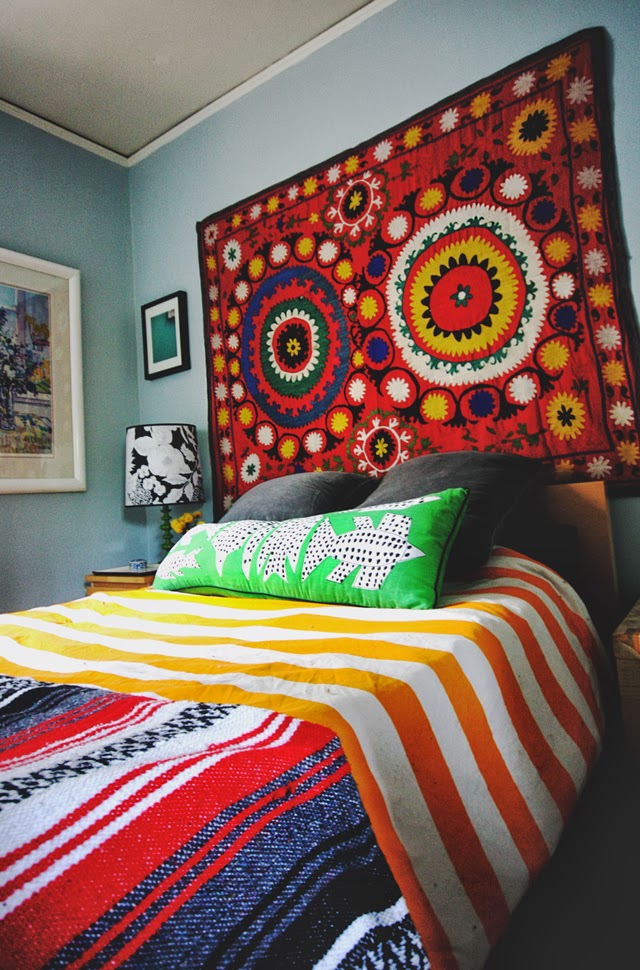 Oddly enough, I happen to own a legit suzani I bought in a market in Kyrgyzstan in 2004, but it’s not large enough for above the bed.  Luckily, through the powers of Ebay and Etsy, you can buy one now from $30 -$200 a pop. This is where I got mine. It took two weeks to arrive from Uzbekistan via DHL, which is half the time it took me to get a staple gun from New Jersey last week. Way to go, US postal service.

True, shipping isn’t cheap. But when you figure the hours of work that must have gone into making one of these…gosh. It’s staggering. All that embroidery. I feel a little guilty having paid so little for something that took so long to create.  Who would spend so much time making this artwork only to give it up? To be sold second-hand across the internet? I worry that I am profiting off another person’s loss. I worry I am just another white person removing indigenous treasures from a developing nation. I worry that…

Damn. Can you tell I’ve been watching Blood Diamond? Oy, I tell you, leave it to that Leonardo DiCaprio to make you feel all hot-n-bothered about your questionable shopping habits. Thanks, Leo.