Last night I decided to spend the evening with buttered peas and Radical Face. A splendid time was had by all. Somewhere in between Entertainment Tonight and my laptop freezing, I decided to light a candle, as I do nearly every night. I don’t light candles out of some romanticized ritual, I light candles as a way to whittle my concentration. It’s my jam. It’s just a tiny flame in a glass jar, but my eyes pick up on its presence and my brain interprets it as signal to get to work. It’s like, CRAP THERE IS A FIRE IN THE ROOM. Quit looking up Muppet movie propaganda on Pinterest and get down to work! So that’s my serenity tip for you, dear reader, lighting  a candle = getting stuff done.
Of course, my Olympian level procrastination skills could not prevent the onslaught of a much contemplated craft project; I could not just light a candle, I had to dress up the matches first. 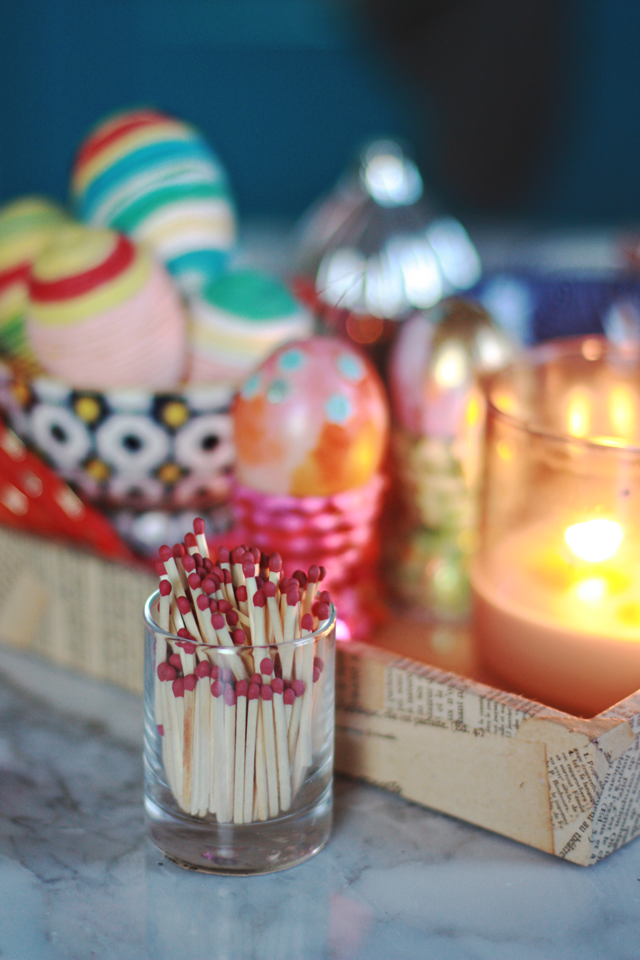 Do matches in a shot glass with a sandpaper bottom even count as a craft project? Probably not. But they look better than the matches you keep in the medicine cabinet, so in the name of “up-cycling” Imma call this a craft.

Before we get to this I want to say something about matches: Matches are harrrrrrrrd to find these days. I know you think they are everywhere, but seriously, around here, they are not. I have been looking all over town for decent wooden matches for months, MONTHS, and the only place that sells them is the Enya playing florist gift shop for $7 a box. Everywhere else under the sun carried lighters-a-plenty, but matches, good quality matches appear to be going out of style or something.

I thought I had seen them in the grocery store next to the napkins, and hardware store next to the camping gear, but to my surprise, I couldn’t find them. And don’t act like I wasn’t looking because I asked in several stores – management informed me they carry lighters, or that matches come out come BBQ season, and until then I could get a free book up at the front counter. Not wooden matches but practical matches, which are not what I wanted but I appreciated the gesture.

Up until a few years ago you’d still see lead crystal bowls of wooden matches on the hostess stand at some restaurants and bars, but that practice appears to have the wayside as well. Maybe you find that in other places, though. Smoking inside bars or restaurants in Illinois is illegal so it makes sense they cut out the cost of supplying books of matches just to end up in someone’s medicine cabinet. That’d be like me going to the beauty salon and expecting salad dressing. Okay not really, that was a bad comparison, but you get the point. Matches are hard to find!

Lucky for me, I reached out to you guys on Facebook and got the scoop – Dollar Tree. This surprised me as I am in Dollar Tree at least once a month, but never once noticed they carried these 8 packs of 32 count matchbooks (in the kitchen section beneath the sugar tongs). 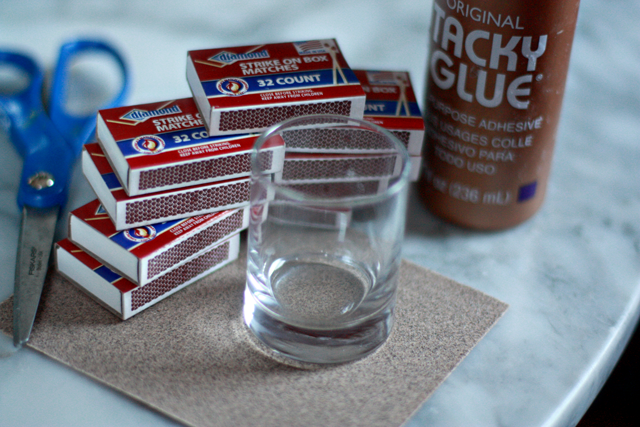 My plan was to just keep a box of matches on the coffee table next to the candle, but these aren’t exactly what you’d call ‘looker’ matches, so they needed dressing up. Last night was the night. This was even better than a box as I could pile them put them all in a shot glass and leave them out on the coffee table near the candle. 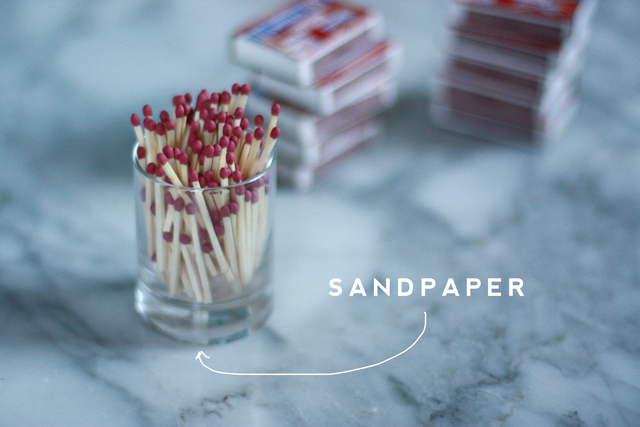 We had a neighbor growing up who used to keep a bunch of tall matches in a shot glass by the fireplace. The glass had a picture of California etches on the side that she’d strike the match against the etching and it would light. I thought that was a California thing but apparently some matches will strike a light when rubbed on most anything with texture. These matches are not like that. They need strike paper or extra fine sandpaper, so that’s what I glued to the bottom of my shot glass. The rough sandpaper didn’t work, so it’s a good thing I tried it first. Dang, way for me to be smart like that.

If anyone else knows of a no-fail source for wooden matches, please let me know. These will run out in time and I’d like to find some less teensy ones. Cigar shops are next on my list, or maybe this’ll be a good excuse to enter the world of BBQ accessories. I’ll keep you posted. It doesn’t get much more exciting than matchbook retailers!