Y’all have to see this.

A random hunt for an old Thanksgiving cardamom roll recipe sent my skipping down the catacombs of my cookbook collection. You know what I found?  I’ll tell you — I found 128 pages of Straight Up Crazy. 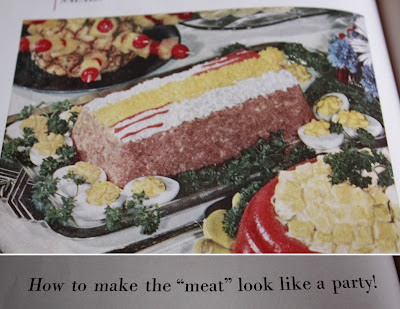 Look at the page on the left. There are so many things wrong with this…

#1 Why is the word meat in quotation marks?

#2  If you were preparing to party down, would really want to whoop it up with meat? Much less meat in quotation marks?

#3 The photo above it on the page features ham and olive jello pâté. Seriously. Jello with ham and olives. I know food trends change, and you would probably be grossed out by some things that I find appealing, but seriously. Ham and olives in jello?

It blows my mind.

Who thinks of these things? And more important, who buys these books?

Oh, crap. I buy these books. 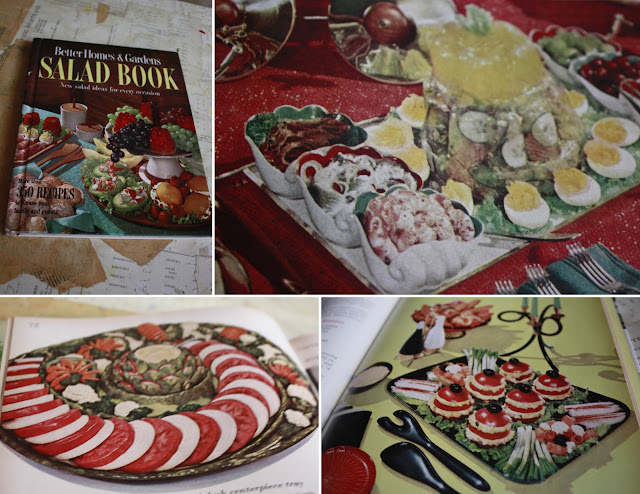 I don’t have a lot of warm and fuzzy memories of Thanksgivings of yore. As an adult, I have usually needed to work that weekend, and as a kid, Thanksgivings at Grandnanna’s house were usually spent locked in the basement with Orange Crush soda and a bucket of fried chicken. Don’t get me wrong, neither one is a bad way to spend the day but they are certainly a far cry from Norman Rockwell-esque images of a cozy family gathered around a lace tablecloth strewn with harvest bounty.

Thanksgiving at Grandnanna’s house was always something of a dichotomy; the adults would enjoy elegant food and football upstairs while the kids would play Chucky Cheese style in the basement. Since no adults wanted to spend their holiday supervising the basement chaos, the room had to be thoroughly “kid proofed” with tarps and duct tape. The Franklin Mint collector plates were relocated to higher ground and the gun rack was double bolted. Even the ping pong table was put away for fear someone would misuse the paddles. Little did they know Tiny Alice was always crafty enough to unbolt the table legs and use them as stilts, repeatedly bumping her head on the basement ceiling tiles until that one time when she got a clump of hair caught in an air duct…but that’s a story for another time.

Early on in the day, the games started peacefully…Parcheesi, Yahtzee, Duck-Duck-Goose, Hungry-Hungry Hippos…by the time the food arrived we were on to Cowboys and Indians….eventually the little kids would hit their sugar crash and doze in the laundry room while the big kids would start playing dodge ball with Grandnanna’s bomb shelter supplies. Fun was had by all! Canned ham and old batteries would whiz across the room until someone, inevitably, chipped a tooth on a projectile can of fruit cocktail and the sight of blood would be enough for the door at the top of the stairs to unlock.

A stampede of kids would rush the steps and within a minute, the elegant party was overrun with sticky fingers and questions like Who is Tom Collins and why can’t I have one?

The rooms were lined with card tables displaying tall, gaudy flower arrangements clustered by colorful platters of finger foods. Blue daisies and Hawaiian themed appetizer trays were a particular household favorite, as was anything suspended in gray Jello or nestled in a ring of cheese salad. Mmm….who’s hungry?

Thanksgiving y’all – it drudges up all kinds of strange. The good. The bad. The gelatinous.