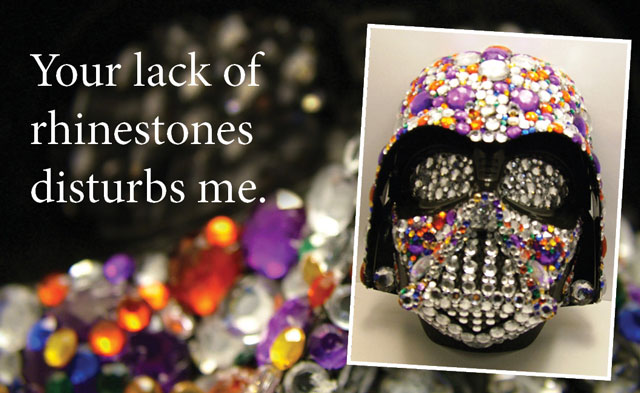 I try not to follow my blog stats very closely, but certain readership trends have come to my attention.  For whatever reasons, this blog appears to be especially popular with: 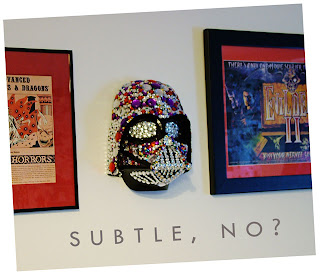 Granted, some of these are logical. Folks went searching “CUTEST ORANGE CAT ON THE PLANET” then stumbled in on Lola, and naturally, stuck around. It’s not like they had a choice. It’s a Lola thing.
But Star Wars? I don’t get it.
I don’t think I have even seen a Star Wars movie since I was in grade school. I have never posted anything about Star Wars. There is nothing on this site that would drive Star Wars related traffic. So why it keeps coming up, I’ll never know….but I’m just going to embrace it!
Rebecca (whose amazing bathroom you might recall) sent me these photos of her latest project this morning. As you can see, I just had to share this amazing creature. He is ridonkulous.
It’s like he’s is too glamorous for the dark side. It’s like Darth moved to Dallas. It’s like Darth rolled around in Liberace’s soul and came out with crystallized light sabers glued to his face. It’s like Darth got a Michael’s 40% off coupon in his mailbox on Tatooine.
And you know how Dark Lords love a good coupon.
The end result is a magnificent specimen of glamor and glitz. No words can express how much I love it!
Once again, thanks to Rebecca for sharing her fabulous, inspirational, super glam creation.
PS: Rebecca has another AMAZING project coming in November. Hint: There’s a rainbow connection.
« Liberace Pumpkins
Happy Halloween! »