As much as I love making costumes, it has come to my attention that I have a special knack for making Halloween gear that children do not want to wear. To put it bluntly: children hate my costumes.
It doesn’t matter how comfortable I try to make the outfit or how close I stick to their initial request (direct quote: “I want to be a Tyrannosaurus rex in a Mets jersey eating A PIZZA!”)…the kid would rather wear a hair shirt than whatever creation I stayed up half the night to make them.
Sad face 🙁
I used to take it personally but now I’m over it. Now I just try to restrict my costume making to adults and everyone is happier that way. The only exceptions are my niece and nephew, Abigail and Luke, and even then it’s rough. Abigail initially hated her flamingo costume. Hated it.
Luke, on the other hand, is barely one month old. He is in the “loaf of bread” stage in infancy where you can dress them up however you want. He cries, sleeps, eats and poops. That’s his job. I figure, if he cries, that’s 25% of his workload right there. Who cares if the crying is costume related or not — he is just doing his part. The best part is that he actually looks really cute when he cries. Look… 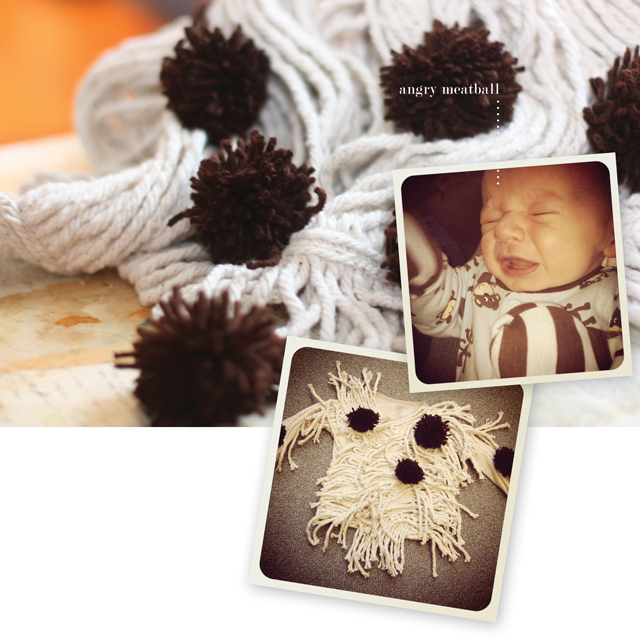 Doesn’t he look like an angry little meatball?
So cute.
I just love that.
In fact, I loved it so much so much that I made it the crux of his costume: spaghetti and meatballs. It’s made from a 100% cotton mop head I bought at Home Depot and some simple brown pom-poms. I just used fabric glue to attach them to a pre-existing shirt. Simple. If they lived in the same state, I would probably take the time to do a proper fitting and sew accordingly, but as is, I just wanted to make something simple and flexible, something comfortable for him to wear, something no other babies would be wearing, something that would hide baby vomit, and something that would not require so much time that I’d feel bad if he only wore it for ten minutes….actually, now that I write that all down,  that sure seems like a lot to ask of a costume. Gosh, way to deliver, Spaghetti!
I sort of wish I had made this in my size too. I wouldn’t mind a spaghetti ball gown.
I shouldn’t talk about these things….the week is young.
« 10 Minute Marker Caddy
Bramble Patch: October 2012 »