If you live in an old house like I do, you probably live in fear of this time of year: mouse time. The weather gets cold and the critters start looking for warm places to set up their winter nest. Like, your house.

Look, I know some people think that a house with a mouse is the hallmark of bad housekeeping, but that is simply not the case. Everyone deals with mice at some point in their lifetime. I know I have. And I don’t care how clean you keep your house, when mice want in— they get in.

Now, let’s just be clear: the best protection against mice is a good cat. Period. But, sadly, not everybody can keep a cat. Sometimes an alternative measure is required. My friend Matt had an issue with mice last fall and nearly borrowed Lola for the weekend to take care of the problem. However, as a peaceful person, Matt feared that Lola + Mice = “Game of Thrones style carnage” which, frankly, would be an understatement.

Wanting to avoid blood on the ceiling and whatnot, Matt googled around and found some great solutions for finding ways to get rid of those mice without hurting them, or touching them (‘cuz let’s be honest — that’s the gross part — touching them). When he told me about this method I wish someone had told me about it years ago. Then, in the last two weeks, I have had occasion to share it with at least five people. Apparently I’m not doing a good job of describing it because they always end up looking confused and I always end up saying “I should just illustrate this in a blog post.”

Welp. Here we are! 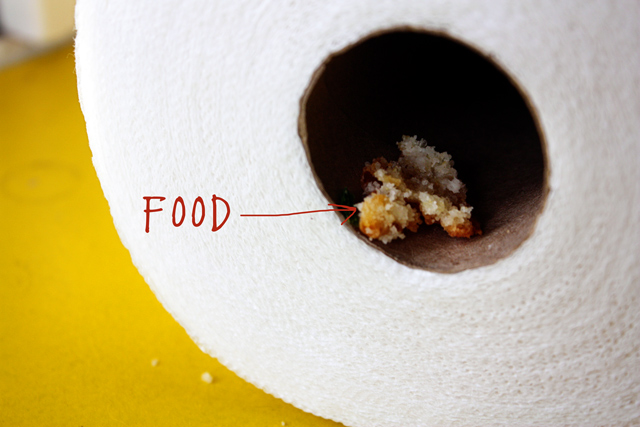 Here we go: Inside a roll of paper towels, place a few crumbs of food. Something fragrant that a mouse would like, say, chocolate cake or cheesy cornbread. You are about to traumatize the crap out of him so make it worth his time, okay?

When the mouse approaches the food, the paper towels will act like a see-saw and topple into the garbage can, mouse and cheesy cornbread included! 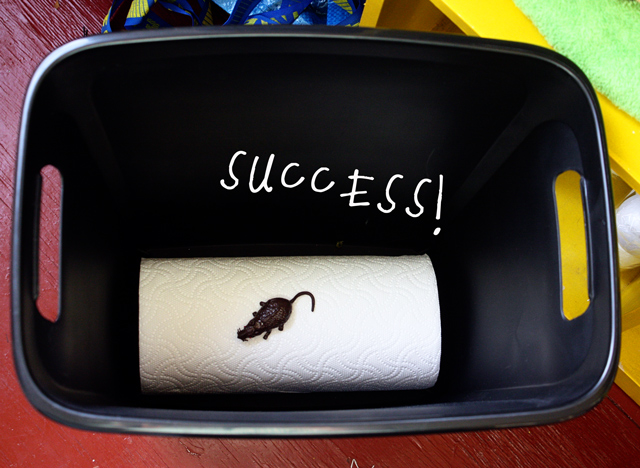 When you wake up in the morning and find that the roll is no longer on the counter, you will know what happened. Don’t even look. Just take the whole can and walk to a park or something and throw the contents into the bushes. Make sure it’s far enough that the mouse (who probably has a better sense of direction than you) can’t find his way back. Bon Voyage little mouse!

*(10 minutes later) Editor’s Note: Matt just read the post and tells me I have been doing this paper towel thing all wrong. He says he recommends “the cardboard roll, no need to waste a whole set of paper towels.”  I say, however, that the paper towels cushion the mouse’s fall. He says the mouse is going to fall out of the roll regardless, so it doesn’t matter. I say it does matter, because also, if he is there a long time, he can shred the paper towel while he is waiting. After all, he is the guest and should be made to feel comfortable. At least until his departure…then you can hurl his mousy butt halfway to St. Patrick’s Day. This is the cardinal rule of  hospitality.