It was as though everyone I knew could only talk about the same two subjects; hurricanes and Star Wars.

Did you see that picture of the guy scuba diving in the subway? It will be weeks before my brother can get to work.

What was George Lucas thinking? He sold the Star Wars franchise just so Disney could RUIN IT?

When will those poor people get their power back? No heat? And the tap water is contaminated?

You realize, its only a matter of time until those mousy fuckers turn Leia into a Disney Princess.

Some folks even speculated that the Disney PR people waited to announce the news until a crisis came along to overshadow the outrage. If that were true, it would appear that those PR people do not know Star Wars fans. 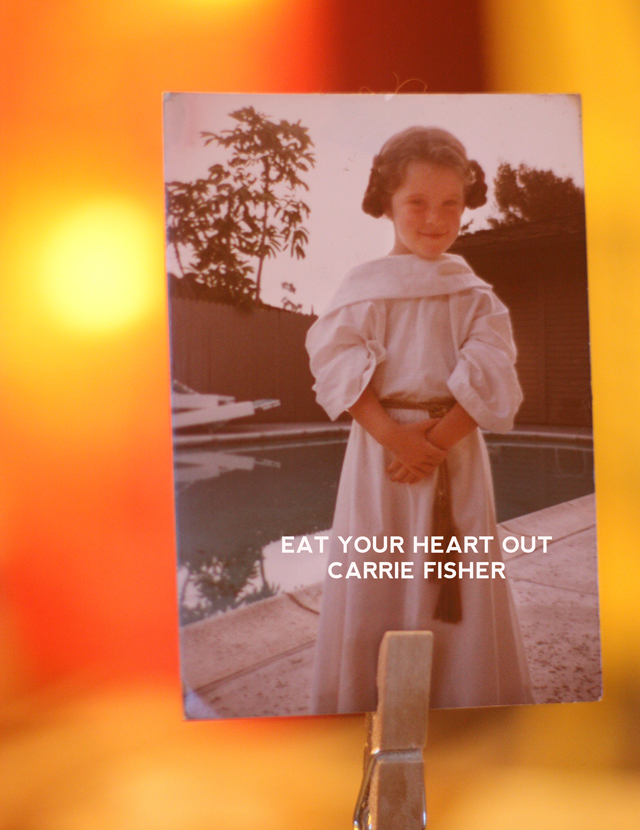 This is an odd subject for me. I have numerous friends who are die-hard Star Wars fans. We seem to flock together for no particular reason or common bond.  I’m not sure why, but I do the same thing with Librarians. And people born in early September. We attract each other. It’s weird.

What’s also weird is that, for all my Star Wars exposure, I have never even seen a Star Wars movie. Not one. My mother made me a Princess Leia costume because she liked the movie so much, although she thought I was too young to see it. That did not stop her from going back to the theater to see it two more times by herself. For “costume analysis” purposes, of course.

It was white muslin and the gold tassel belt was a curtain sash. I had no idea what I was supposed to be wearing, but I knew it was cute and that was good enough for me.

PS: Anyone need a last minute festive touch for candy distribution? I made this last year — tape some rubber gloves to a tray or box lid, then line with tissue paper and candy. Just do it. You are fun like this and you know it. 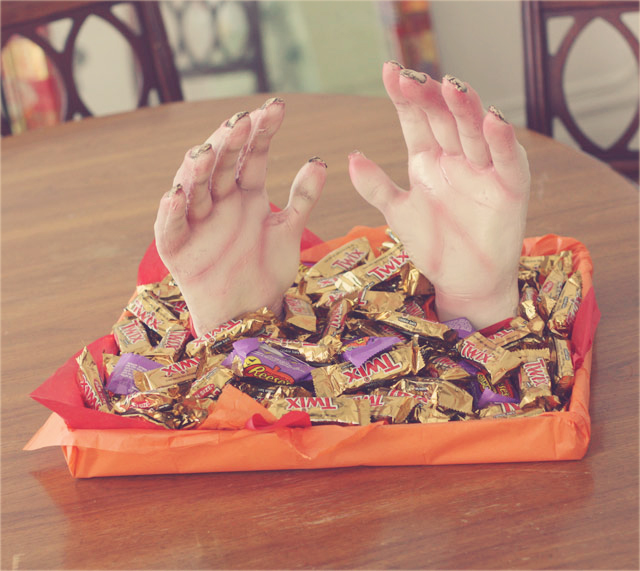 Can I just tell you something? I bought those purple candies thinking I would be all cool and hand out Reeses Peanut Butter goodies because those were my favorite as a kid. Problem is they are my favorite as an adult. They never make it to the kids on the 31st.

What sort of candy are you handing out? Good & Plenty? Tootsie Rolls? Snickers?

Or are you that house that hands out raisins? It’s OK if you are. I won’t judge. At least not while you are looking.