Confession: I hate transparent tape.
When I was 19 I had a 48 hour temp job wrapping gifts at Henri Bendel. I don’t know if it works the same now, but back then at Bendel’s the signature wrapping paper was a chocolate brown and white stripe, and the stripes always had to align seamlessly or at a perfectly perpendicular angle. Always. Making things more difficult, they did not allow gifts to be wrapped using tape or exposed seams.  Like the hem of a skirt, all of the wrapping paper edges had to be folded inward exactly 1″ and packages were sealed using paste-like clear glue sticks. Of course the glue would take a minute to dry so we would hold the paper in place with weights made from red  jewelry boxes filled with silica pouches.
All of that effort —for something that was by definition meant to be torn away— was totally bizarre, wasteful, not to mention a royal pain in the butt…and yet, to this day, I refuse to wrap gifts with exposed seams. It’s like a disease. I caught it. I can’t get rid of it. For a long time I would use double-stick tape to invisibly bind the paper together from the inside, but now I have moved on to my secret weapon: tapeless tape. 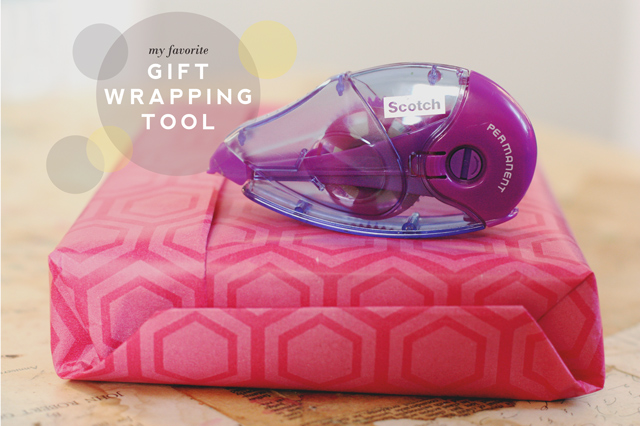 If you are a scrapbooker, you probably already own this stuff. The rest of us can find it in any craft or office supply store. Sometimes it’s called mono adhesive, or tape runner, I call it tapeless tape. Because it’s like tape, but without the tape.
I know. Mind = Blown.
It comes in little ergonomic roll-on thingies and lays down a thin strip of no-mess instant-stick adhesive. There are some kinds that roll on with peel-away paper backing — don’t get that kind. Just get the permanent roll-on adhesive kind. You can even get temporary adhesive, which is great for people who want to keep and reuse the wrapping paper (not so great for people who have gift peepers in the house, but, you know what they say — Peepers Gonna Peep). Scotch brand happens to be the kind I have on hand at the house, but lots of companies make the stuff. It sells for about $3.00 for a 40′ roll, which, when compared inch to inch, is 12% more than the regular transparent tape displayed on the next shelf up (yup, I looked). Normally I’m all for saving my pennies but I am confident this gizmo cuts my wrapping time down far more than 12%, so, by that math, it’s a major bargain in my book.
So, let’s swap secrets: Do you have any gift wrapping tricks?
« Photography Tips: Christmas LIghts
Stay Classy, Double-Stick »