Later this month I’m going to Mississippi to hang with family, soak in some sunshine, and partake of the tastiest food this fine country has to offer.

True, all three of those things can be done while eating tater tots in the Sonic parking lot, but we are expanding our itinerary to include some more seasonal rights of passage.

This time, in addition to Jackson’s legendary St. Patrick’s day parade  (now Sans Sweet Potato Queens – scandal), we are hoping to make a quick trip down to New Orleans for some Irish music and Indian heritage. Yes, I said Indians… 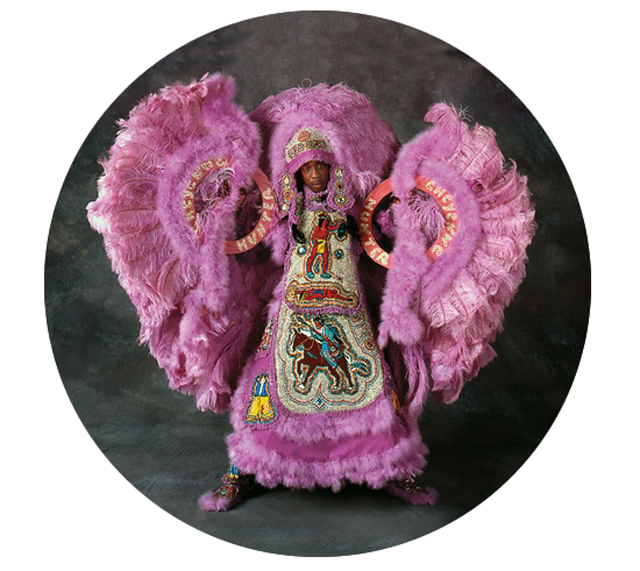 This year March 17th also coincides with St. Joseph’s Day, one of the few days of the year the Mardi Gras Indians* return to New Orleans. It’s a thing to see. It’s not so much a formal parade with a set route and time, so much as it is a march. People get together and march in a procession. That’s a very New Orleanian thing to do. I don’t know any place in the world where people will drop anything for an impromptu, circuitous parade.

*Listen, don’t nobody email me some PC crap about Indian being a forbidden word – in this case it is a self-proclaimed title. I’m just following their lead.

Most Mardi Gras organizations will form a krewe, often named Roman or Greek god. The ranking structure of a Mardi Gras krewe is a parody of royalty; king, queen, dukes, knights and captains, and so on. Many more established krewes allowed membership by invitation only.  Being part of a krewe, any krewe, is to belong to a club.

Back in the day, many New Orleans natives felt uncomfortable participating the typical parade hierarchy, so a handful of African-American neighborhoods developed their own style of celebration. Their krewes are named for imaginary Indian tribes according to the streets of their ward or gang. Naming themselves after native Indians was a way to pay respect, as, back in the day, it was often the local Indians who were first to accept slaves into their society.

So here we have a little slice of American history packing into a whirling flourish of sequins and feathers.

Read more about the Mardi Gras Indians and their secretive ways.