I read somewhere that chronic list-making is one of the most common attributes among successful people. (You know the type – so  annoying). It’s because they get an odd thrill out of crossing items off the list, thereby spurring them onto the next item on the list, thereby making them super productive and efficient and successful and better at life in general. People who make lists get what they want. People who make lists are never disappointed. People who make never have to feel their leg hair poking through their yoga pants in winter because they are soooo on top of it. 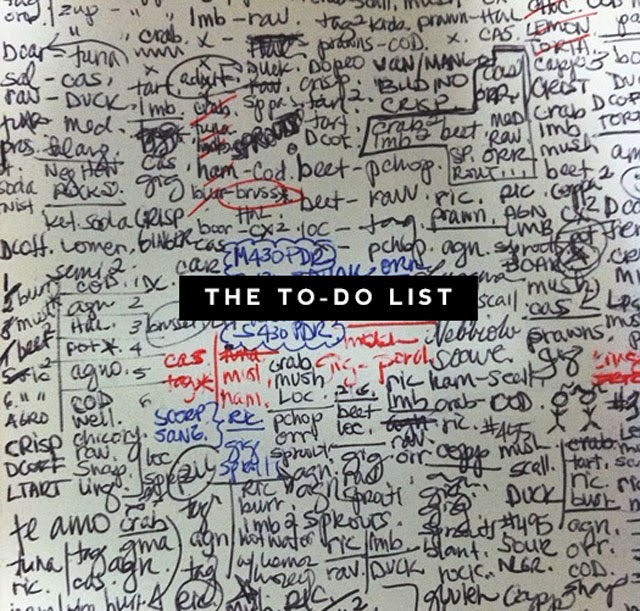 Not surprising to many, my current note-taking process does not follow such an efficient format. Or any format. In the past I would just scribble things on a single sheet of paper until the paper filled, almost like a patchwork quilt. Then I got a start phone and just make random unorganized notes of all sorts, one after the other, sometimes several dozen a day – everything from work stuff to blog stuff to stuff I heard people talking about on the bus – watch this program, make this recipe, try this restaurant, record this show. One day I was like, Oh crap, my iphone learned how to spell Cumberbatch, and I knew we were in an unhealthy co-dependent relationship.

To get my list-making skills in better shape, I am doing two things.

Thing one – I got N+otes – it’s a phone app that clusters lists of lists in an organized fashion. You can add or subtract stuff to a list at any time. It’s annoying because it takes me four clicks to write down a simple item to get at the grocery store, but it’s neat because my grocery list is there for adding/subtracting at any time. Great tool for bloggers. Pretty cool, and way less complicated than some outlook calendaring stuff that makes me feel bad about myself for not setting a deadline on when to switch the lint trap.


Thing Two –  I’m using verbs. Yes, verbs. Studies have shown that if you start an item on your to-do list with a verb, you are significantly more likely to do it. So, instead of writing MILK, you write BUY MILK. Instead of writing DRY CLEANING, you write PICK UP DRY CLEANING TUESDAY, and so on. Be specific. The video above does a better job of explaining it, but I have already found that it sorta does work. Nifty trick, huh?

Okay. That’s all I know about this subject, but I thought it was neat so I wanted to share. If you know anything about being more efficient and productive, feel free to tell me because I could use all the help I can get.