Two years ago I saw an indigo shibori bedspread and I wanted it so bad. So bad. It was like $1,700 which is like $1,698.34 more than I would ever pay for something that didn’t come with an engine. (Or a litter box). So, as my shibori dreams were put on hold, I would stay up late at night watching youtube documentaries on the subject, eagerly staring at old Japanese women tying knots into fabric with their feet (yes – it’s pretty rad). I thought to myself, I can do that. I can totally shibori. I can dye things blue and make them come out pretty too – can’t I? Can’t I!?!

But I didn’t. I didn’t DIY an attempt at shibori because every month or two some new shibori bedspread or scarf or whatsit would pop up on the internet. Some expensive, some real expensive, some were probably reasonable but just seamed expensive to me. I thought I’d wait for a sale or something and pounce when the time was right. 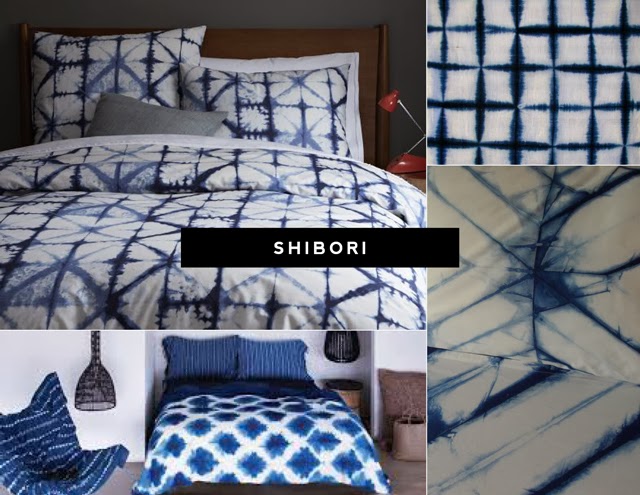 Well, the sale happened. And I missed it.

So when I was at Ikea last Saturday I went and bought a plain white duvet for $24.95 and went home to make my own. 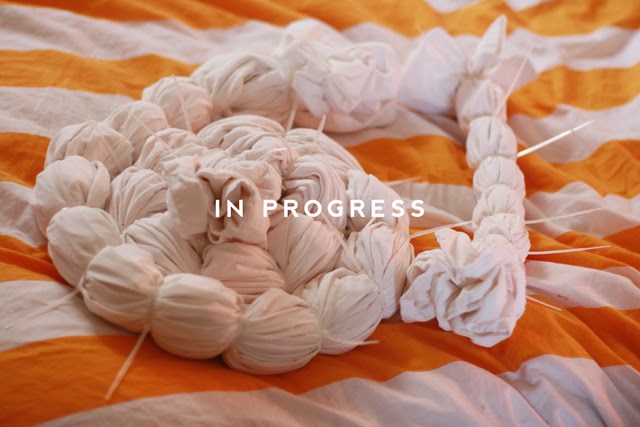 I used zip ties yanked off tight with pliers and three times the amount of dye recommended. I waited and waited and waited. Then I threw it in the washing machine to final rinse and when it came out do you know what I found? 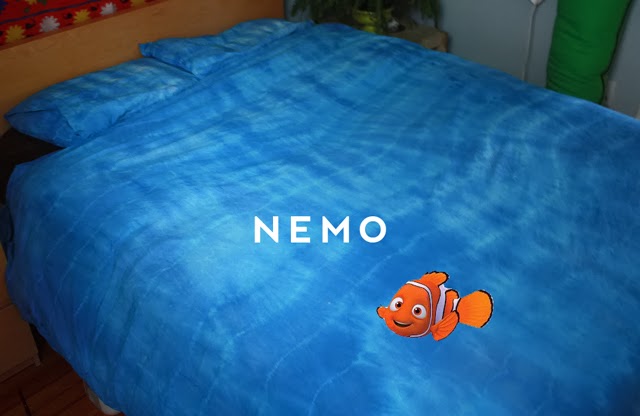 I found Nemo. That little sh*t.

I found Nemo swimming around in this big blue under the sea poop blue bedspread that looks like this. THIS. I think I found Ariel, The Little Mermaid, too. And maybe Sebastian the crab. You know who I did not find? Those stupid Japanese ladies in the Shibori documentary.  I think they are hiding from me, probably behind a blob of sea weed laughing their little delicate Japanese heads off. Bitches.

What is especially disturbing to me about this is that the last time I tried a variation on tie-dye, I nearly poisoned myself on bleach vapors for the better part of a week. Conclusion about tie-dye: it hates me. As someone who is generally pretty crafty, it is difficult for me to accept that tie-dyeing is something that can be easily be commissioned from a toothless and bearded carny in the parking lot of a Phish concert, but not me. Not even close. No matter how hard I try, I cannot tie-dye. And you know what?

Nemo – not so much okay with that. He’s going to Goodwill before his little fish butt starts to stink.

There is this thing called bleach dyeing that is all the rage. Or, at least it was all the rage. I’m not sure where it is in the current trend cycle, but when I woke up early Saturday morning with a desperate need for patterned curtains in my living room, it was a means to an end. Have you seen bleach dyeing? It sorta looks like that time your mom spilled bleach on your favorite black sweatshirt, but this time it’s on purpose. Some people splatter it on their jeans, some people draw it on with a bleach pen, and some people take a reverse-tie-dye approach – that was me. I had two sets of dark eggplant-colored curtains from Ikea. Totally free to me, leftover from a friend’s former apartment (it pays to be a hoarder!). Nice and thick. 100% cotton, too. Perfect for bleaching, right?

This is what I was going for…

This is in process… 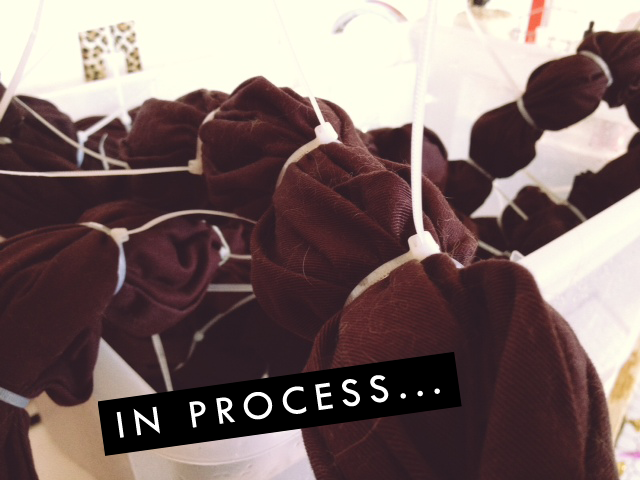 This is what I got… 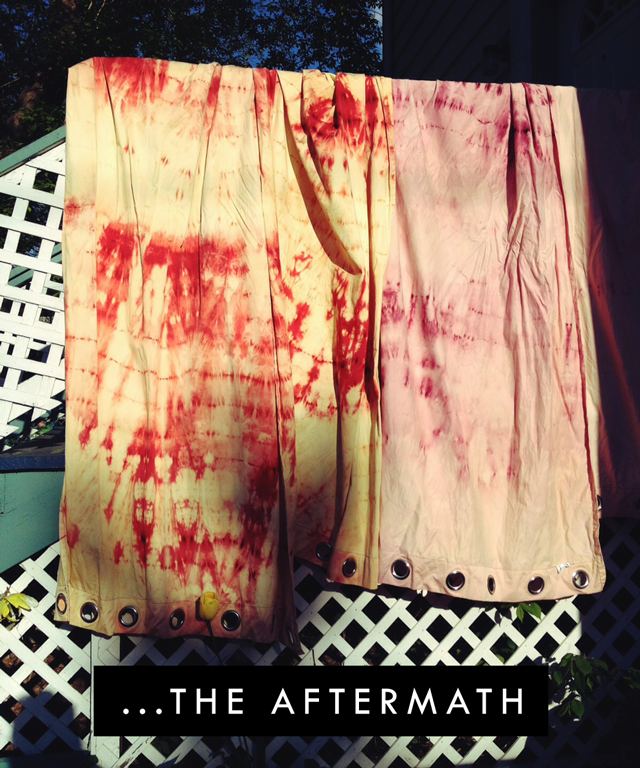 Not only did the fabric FREAK OUT, each set of curtains FREAKED OUT in a different way.  Yes, same bleach/water solution and the same amount of time.  I’m guessing the fabric came from two different dye batches in the first place. Just my luck, right? One came out pink and purple with hardly any markings, one came out yellow with big red splotches all over. I showed this pic from my phone to a friend and asked what color they would use to describe these. Answers…

“after the axe murderer”

So that was fun.

They smell awful. Even after two rounds in the washing machine they can’t come inside. I had to sling them over the back banister just to take this crappy photo. I’m sure the neighbors see this and think I killed someone.

To top it all off, in this glorious process, I think I gave myself a mild case of chlorine poisoning. Awesome. No, for real: I seriously doubt anyone will try this based on my review here, but if you do, do this OUTSIDE ONLY. Working in a sink under an open window with a fan and gloves is not enough.  Sooooo not enough. My Diet Coke still tastes like pool water. And if that isn’t a cautionary tale, I don’t know what is.

Woe is the tale of patterned curtain seeker!

I was so psyched to make something fun to wear to The Hunger Games on Friday. I thought I was sooooooooo clever making a pin out of puff paint. Ha! Because, not only am I nerdy enough to puff paint my own movie themed jewelry, I am nerdy enough to wear it when it.

It was supposed to look like Katniss’ golden mocking jay pin but it came out looking like someone stepped on a glittered tater tot. 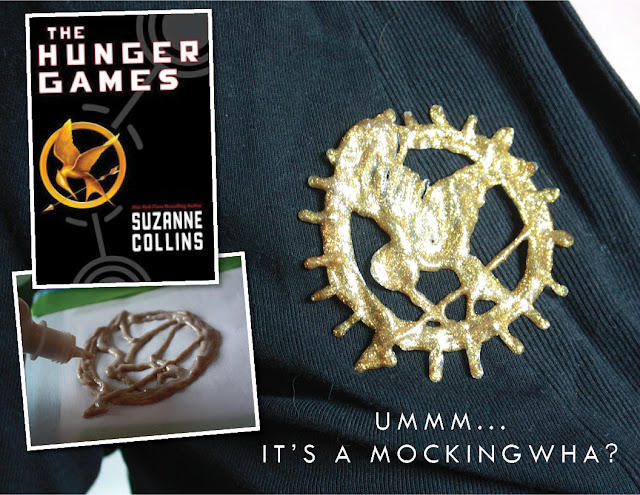