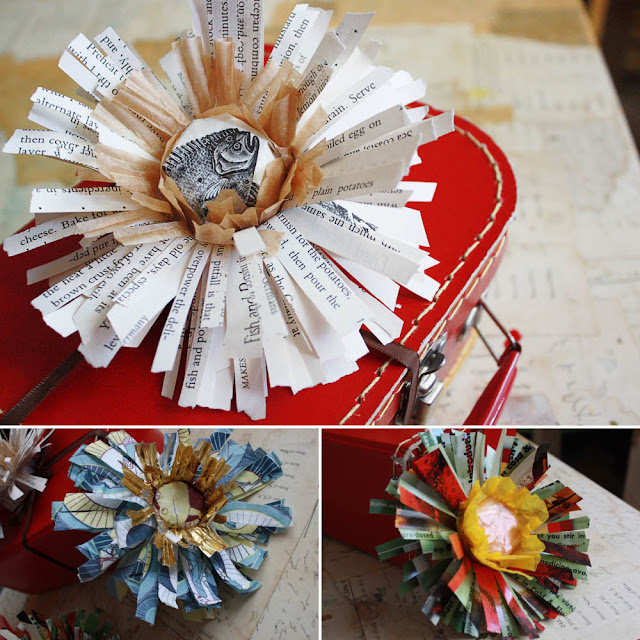 I can’t stand ketchup. Smells like rancid jam. And what’s with the crud that forms around the squirt hole? The only thing I like about ketchup is that it’s loosely affiliated with ketchup cups, which is the core of these flowers, as well as one of my most shameful childhood past-times: laughing at the screaming children who found body parts in their lunch.

Our school lunchroom was probably the same as yours: crowded and smelly. Hot lunch was free so hardly anyone ever brown bagged it, except on Clam Chowder Tuesday. The line was overseen by Mrs. Krenshaw, a woman whom my friend Heather’s dad once described as “a cross between a wildebeest and Dom DeLuise” to which we said “who is Dom DeLuise” and he would say “WHAT DO YOU MEAN YOU DON’T KNOW DOM DELUISE” and we were all “HUH” and then he decided to show us by tying a napkin around his neck and telling us jokes he saw on The Dean Martin Show the night before.

WHAT DO YOU CALL A COW WITH NO LEGS?
GROUND BEEF.

It seemed funnier back then.

Despite working with hundreds of children each day, Mrs. Krenshaw was not the maternal type. We were petrified of her. She was never mean, outright at least, but she was loud and told us chocolate milk would give us head lice. She also told us lots of stories about her husband’s truck driving adventures  and this one time when she was in the Navy and saw some island people in Polynesia sitting on rocks eating a live octopus.  We would be all squealing and horrified and she’d gnash her teeth up and down real wide and mime the movements like she was eating an octopus the size of a car. Very dramatic. Indeed, an excellent way to get kids to eat their spaghetti.

The one Navy story she never told is how she lost the bottom tip of her left ear. Some of us speculated it was a battle wound from her Navy days while others claimed it was Mr. Krenshaw, who bit it off after coming home from a three day trucking haul so hungry, that when he leaned in to kiss her cheek, he just nipped it clean off.  If you ever saw Mr. Krenshaw, you would have totally believed that second scenario too.

Lunchrooms are a scary place for new kids, so Mrs. Krenshaw went out of her way to make them feel welcome by playing a joke. More like a hazing ritual, really.  The child would approach the line, wide-eyed and confused, while Mrs. Krenshaw would put on her friendliest voice and walk them down the line, making sure they got their tater tots and milk and sporks and napkins…all the while she was luring the child into her trap.

By the time the two of them got to the condiment station the whole room would be watching. It always went down at the condiment station. Smooth as a rhinoceros she’d go reach her hand behind the chart of triangular food groups and grab a pre-filled ketchup cup and slip it on the new kid’s tray. A moment later you would hear her yell sweet as can be “Hey now, what’s in that ketchup cup of yours? You got something there!”

…the kid would stick their finger in, dig around and pull up a small piece of something which would be later identified as a potato scrap.

“What do you have there Starshine? Is that a piece of something? What do you think it could it be?”

Right at the moment the kid held it up, right when they noticed the whole room had gone silent, right about when they were going to put it in their mouth, she would lower the boom:

Of course the kid’s head would whip around to see a chunk of her ear was missing and scream and drop the tray. Very dramatic. While the kid stood there crying and confused, Mrs. Krenshaw would laugh hysterically. I laughed too. We all laughed. I can’t tell you how bad I feel about participating in the laughter. I’m ashamed of myself for ever laughing at someone in that position. I should have stopped the kid before they got to the condiment station. I should have warned them. But how do you tell someone you never met “she’s going to put an ear in your lunch. but no biggie, don’t worry about it.”

A minute later, when the joke was obvious and the kid calmed down a little, she would call for another child to come up and fix a tray and make the new kid feel welcome. Usually it was a friendly, popular kid from the same grade level who she knew would make room at their table and take the petrified new kid under their wing. Everyone around the table would assure the new kid “at least you didn’t pee your pants like the last one” and fast-growing friendships were seeded.

Look, I question her method, but you can’t beat the end result. The kids made friends fast.

My apologies to the dozens of grown adults who I laughed at as a child. Especially the one I laughed at so hard that I bit my tongue and had to go home early. To you, dear friends, this craft is not for you. Your probably still petrified of ketchup cups and will want to avoid being near them, much less crafting with them.

In honor of Mrs. Krenshaw, and her love of ketchup cups, here is real simple do-bob-thingy you can use to tie on packages. Or dress up a bottle of wine. Or wear in your hair. To cover your missing chunk of ear, of course. 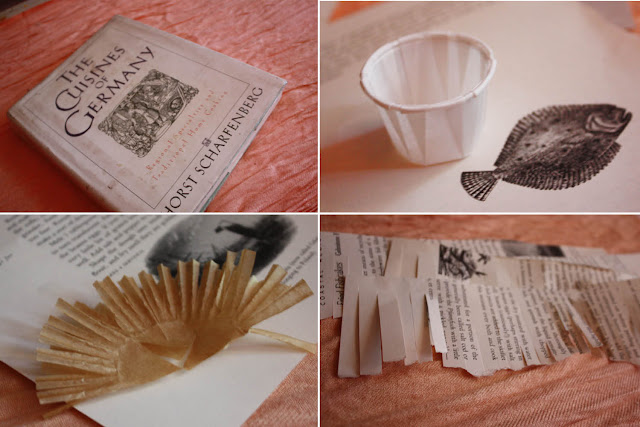 * 1 funky old cook book you never use anymore
* 1 paper ketchup cup
* 1 muffin liner with edges and center snipped/fringed
* scraps of cookbook paper snipped and fringed (varies widely depending on paper thickness, here I used wide 18” of paper 2” wide + a square for the center)

Time: 2 minutes if your handy with a glue gun 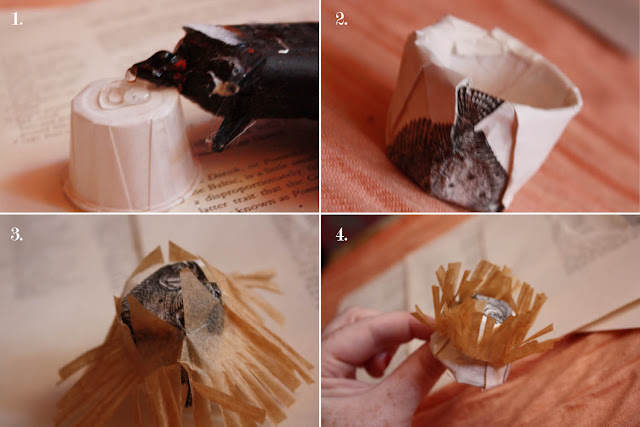 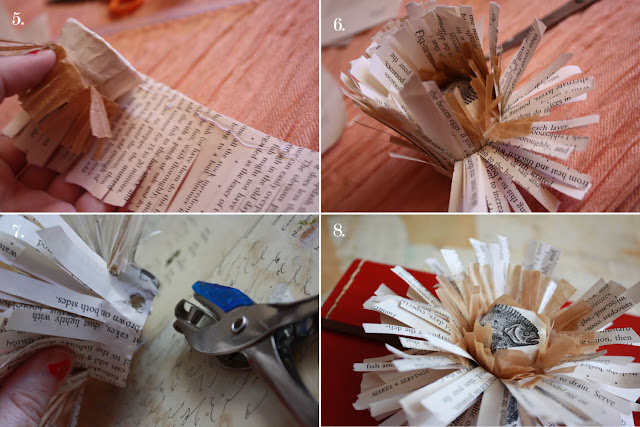 5.    Run a bead of glue along your paper fringe and roll the ketchup cup along the rim
6.    Fan out your paper and muffin wrapper fringe
7.    If you plan to string it on a package, punch 2 holes along the bottom rim
8.    Run a ribbon through holes, slap on a box, and ta da!!