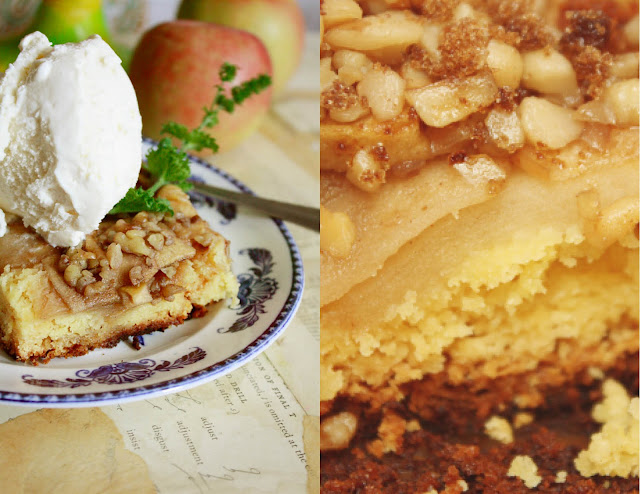 I was standing funeral home’s parking lot playing hacky-sack with some family members when Franny asked “whatever happened to that deaf lady? You know, Old Rubber Face” to which Herbert replied “don’t you remember, we buried her years ago” to which hitomeone else replied “oh yeah, with the apple cake!” to which everyone replied in unison “OH YEAH. THE APPLE CAKE!”

Big Alice had already been gone nearly a decade, more than half our lives, and we were still talking about her apple cake. It was that good.

For a woman who could not hear and rarely spoke, Big Alice could communicate across an ocean with her facial expressions. In fact, it was not until Herbert’s mention in the parking lot that day that I realized she was deaf. In my mind, we had spoken dozens of times. Heck, we were pals! She played in my blanket fort. I fetched her unfiltered cigarettes from the patio. She saw me hide brussel sprouts into my napkin and didn’t tattle. I didn’t say anything when I saw her taking a swig off a wine bottle in the kitchen just before she took it out to the table. Herbert’s news that she was deaf came as shock. In vain I searched my memory for the sound of her voice.

Isn’t it strange how the very young and the very old have no problem communicating without words?

Big Alice was born somewhere in western Austria. I’m not entirely sure where, but I know she spent most of WWII in a work camp in Eastern France. The fractured stories conveyed across various members of my paternal grandmother’s family are not pretty, nor are they my stories to tell in this forum. Sufficient to say, Big Alice survived on little more than her sense of humor. She lost her hearing at the age of 23, when a respiratory infection went untreated and spread to her ears and nose. Although she could speak just fine, you rarely heard a word cross her lips. After the war ended and she came to America to live with my Great Aunt Long Shirley and Uncle Karl, she was discouraged from speaking German in effort to assimilate. She learned to read and write in English just fine, but without the ability to hear her own voice, never became comfortable speaking in English with others. Unfortunately, the others did not feel comfortable speaking German in post-war America. Things are different now and we all go crazy celebrating our Germanic heritage, but back then, Big Alice had to rely on her hands and facial expressions as a mode of communication, hence the nick name, “Old Rubber Face.”

Her other nickname, Big Alice, was misleading. The woman weighed as much as a wet hamster. The name came only after she had a daughter, dubbed Little Alice, whose daughter then became known as Tiny Alice. As fate would have it, Tiny Alice recently had a baby girl named Emma, which is a lovely name, but I was really looking forward to one day adding an entry to my address book under the name Infinitesimal Alice.

A trio of Alices was not unusual. Most of the members of my father’s extended family share the same 6 or 7 first names, all named after a handful of people who died long ago and far away. One Thanksgiving at Baby Shirley’s house (note: Baby Shirley was pushing 50 at the time), someone called out from the kitchen, “Hey Joe, you have a phone call” and five men and two women stood up.

And that’s not even counting the kiddy table. And by kiddy table, I mean a locked basement covered in tarps, duct tape, and a dozen buckets of Kentucky Fried Chicken. The visual of 20+ children without adult supervision, screaming and squealing and playing Pilgrims and Indians while sucking on drumsticks might strike you as something out of Lord of the Flies, but to me, it just seemed like a normal family activity.

Tangent: When I tell you my Dad has a big family, I don’t mean he had a lot of brothers and sisters. It grates on my nerves when I hear people define “family” as a circle of immediate blood relatives. Family, at its best, is so much bigger and more wonderful than just a tiny group of people with a common gene pool. Some families are related by birth, some by circumstance, and some by love. When I was a kid, my grandfather would meet me at the bus stop and walk me home and ask me about my day. One day I came home and reported that there was boy on the playground teasing my friend Michelle and saying she didn’t have a family because she was adopted. My Grandfather asked me what I did about it and I told him, rather proudly, that I ran and got the teacher who immediately stopped the teasing. He looked at me disappointed and made a tisk-tisk noise with his tongue. I asked him what I should have done instead and he said “Beat the tar out of him.”

My dad’s family defines its members by an elaborate and extensive phone tree where three people call three people and so on and so on. It was initially started back in the 50’s as a typical cold war precaution, but it is still alive and kicking today, used mostly to pass along news of  births, engagements, and unfortunate passings. Email could do the job, but what is the fun of that? This way, when someone dies, the phone tree starts off and three people call three people and so on and so on, and before you know it, everyone knows and everyone is cooking. This means that within two hours of someone’s death, their living room will contain no less than 12 casseroles, 10 cakes and pies, 8 trays of cookies, 5 pickling salads, 3 bottles of wine 2 cheese trays and 1 tomato aspic. Lord willing and the creek don’t rise, there will be a roast turkey on the doorstep come morning, courtesy of Baby Shirley’s eldest daughter, Hairy Frances.

Everyone has a special dish. It never changes. For example, Baby Shirley’s middle daughter, Baby Roberta, has been making pinwheel cookies for forty years and no one makes them quite like her. If you see pinwheel cookies, you just know they came from Baby Roberta because no one would dare step on her territory. Don’t even bother asking for the recipe. She makes them the best and it’s not even worth trying anything else. If I lived in the area and someone died, I would be in charge of bringing over a veggie tray. It doesn’t matter that I don’t eat raw vegetables, there is no room in the baked goods department where I rightly belong. I’ll need to wait until someone in charge of cakes and pies dies before I get a crack at delivering something good and tasty. This territorial land war over dessert cobblers is how the legend of Big Alice’s Apple Kuchen was born.

Prior to her death, Big Alice would always bring a delicious and wildly popular apple kuchen (fyi: kuchen is German for cake). Regardless of how much food was around, it was always the first dish to go. She only made it when someone was born or when someone died. Big Alice was high up on the phone tree and the kuchen didn’t take long to make, so she was usually one of the first to arrive. This meant  if you wanted some kuchen, you needed to get your butt over to the house faster than everyone else. It brought out strange and competitive behavior. One time I saw Uncle Sloppy Joe sneak some in his pocket and nibble on pieces as they carried Old Rusty Uncle Karl’s casket out the door. That might seem rude to you, but it’s probably what Old Rusty would have done if the situation was reversed. The kuchen was just that good.

The afternoon Big Alice died of a sudden aneurysm, everyone said “what a shame” “what a pity” “at least she didn’t see it coming” and agreed it was a good thing to be taken without great suffering or pain. They went on their way and said “see you shortly” before hanging up the phone.  By 6 p.m. Little Alice opened the door to see Aunt Shirley carrying a glass Pyrex dish covered in foil. It was kuchen. The gesture was sweet and passive aggressive. By making apple kuchen for Big Alice’s funeral, she would secure it as her signature dish for decades to come. She wanted to win the popularity contest. Can you blame her? I couldn’t. And neither could Aunt Roberta when she showed up carrying an aluminum tray of her own rendition of what else, apple kuchen. Then the Rauches showed up with more kuchen. And the Millers. And then Big Franny. And then Hairy Frances (she was tired of making turkey)….and so on until 7pm there were THIRTEEN APPLE KUCHENS spread out on the dining table. Each were delicious and slightly different, but none were quite the same as Big Alice’s Apple Kuchen. Everyone agreed to hold back on claiming the sacred kuchen spot. No one made it for many years. Until now. I have taken it back!

Before she died, Big Alice gave her recipe to Little Alice, who gave it to me here. And now I’m giving it you! It’s no great secret and I’m positive she left out something special, but it comes pretty close. It’s easy to make and easy to customize to suit your family’s taste. the end result is somewhere between coffee cake and apple pie. It keeps well and goes great with ice cream.

+2 Tbsp of Brown Sugar for sprinkling

BAKE
After the apple mixture is tossed and the cake is in the oven 15 minutes, remove it but leave the oven on. Arrange the apples in rows across the top of the warm cake and sprinkle with 2 Tbs of brown sugar. Return it oven and cook 30-35 minutes, until toothpick comes out clean. Serve warm with fresh cream or ice cream!