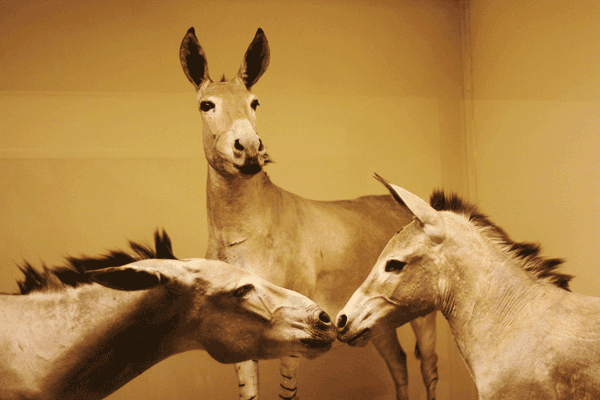 Hard to believe they have been dead since before you were born.

That’s the hallmark of quality taxidermy you know—they look younger than you.

Actually, I once had a job working for a taxidermist.

And by job, I mean eight hours spread over two days in a basement full of freezers while wearing a gas mask and listening to Fleetwood Mac.

And by taxidermist, I mean an artist who specialized in bodily restoration.

That’s what he called it: bodily restoration.

Working for a taxidermist probably strikes most people as gross, but I didn’t mind. Embarrassing? Sure, but I was young and the money was good and I figured I had seen plenty of dead stuff in my day. What was one more raccoon?

And besides, the taxidermist was a very nice man—not like these weirdo taxidermists you see on TV who live in their parents’ basement and get off on collecting body parts—quite the contrary, he was quiet and gentle with soft voice and an immaculate work space. Lots of coasters. Cleanest mustache you ever saw. Sometimes he would talk to the animals as he worked and say things like “are you sure you want to twist your neck to look to the right? The squirrel in the tree is on the left. See here….that’s better, isn’t it?” and of course, everyone agreed the left would be a much nicer place to gaze upon for all eternity.

On the downside, he smelled strange and listened to way too much Stevie Nicks. This one time, he told me he could only install glass eyeballs while listening to Sara because it “inspires an inner serenity” which was major creepy, yet, oddly complimentary, no?

I liked to think when Stevie Nicks sat down to compose the piece, she thought, I want to write a song that entrances a man into state so serene he is fit to install glass eyeballs into the head of a bird carcass.

You know, apparently Sara was actually written about Mick Fleetwood’s first wife, but I’m pretty sure Stevie is going to change her story when she hears my theory.

Anyway, this job, with the taxidermist, would be the first of two jobs where I was hired entirely based on the appearance of my hands. The moment the taxidermist saw them he flipped them over, held them to the light and declared they were “the hands of jeweler!”

He was getting up in years and his hands were not as steady as they used to be. Stuffing and sawing were not a problem, but he needed someone with steady hands to glue individual hairs and feathers around the facial features of the deceased. See, (and feel free to skip ahead if you just ate), if you have ever seen a dead animal, you know the areas around the eye sockets and mouth are the first to decompose, and since making a dead animal look alive again relies heavily on the appearance of realistic hair, my job would be of critical importance. He made a big deal about valuing my time and my talent, which was a first for me in the workplace. It’s hard to say how much I appreciated it at the time. Hallmark just doesn’t make cards for these things.

This post has already gotten more gruesome than I intended, so I’ll spare you the details of my eight hours of bodily restoration boot camp, sufficed to say, I quit shortly after a phone call with a client in Missouri who wanted me to color match the innards of a fox to see if they would be appropriate to use in his fishing gear. It didn’t matter how much I needed the money, a girl has standards.

Blah blah blah, where was I going with this? Oh yes, the taxidermied donkeys. So last weekend, Kiki and I went to the Field Museum, which is sort of like Chicago’s natural history museum—an essential library of taxidermy species, plus a basement of archived creatures that the public never gets see. The taxidermist I worked for was always very proud to say he had several birds on display at the Field, but I won’t show you pictures of them because I cannot remember which ones belong to him. I think there was an African partridge or two. Or something. Oh, I’m a bad employee…

Anyway, while we were at the Field, I saw these donkeys on display. The taxidermist was highly critical of how subjects are positioned and thought they should mimic their natural environment. I’m guessing the people at the Field Museum are of similar ilk, so I wonder, honestly; what the hell is going on here?

These donkeys—are they kissing? Are they greeting? And that one in the middle looks shocked. It sort of looks like a scene from Three’s Company with Jack and Janet smooching on the couch and Krissy just walked in from the Regal Beagle.

Or maybe it’s something else.

I can’t decide. But it’s a very creative donkey display, don’t you think?

« Note: I am not a quilter.
The Glittering Bacon Lamp »