Saint Patrick’s Day is one of hundreds of saints days but it’s one of the very few observed outside the Catholic faith. To some, this day is devoted to the man who brought Catholicism to Ireland. To others, it’s a day to wear Irish sweaters and get sloppy drunk off green beer. To me, it’s a holiday entrenched in symbolism and mythology – two of my favorite subjects.

As someone with part Irish heritage, who is pathologically superstitious, and has a college degree in pictorial semiotics, Saint Patrick’s day is like my second birthday. But better. And spookier. But with less cake. And more snakes.

I don’t think it’s any secret that Irish folks are gifted storytellers – pair that gift with the passing of generations, a flair for embellishment, and an Old Country waft of nostalgia, it makes for some interesting tales of origin. It would be easy to write a book on all the crazy stuff Irish people have stuffed into their immigrant-come-lately folklore, but for the sake of brevity and festiveness, let’s keep it to the surface level, shall we? 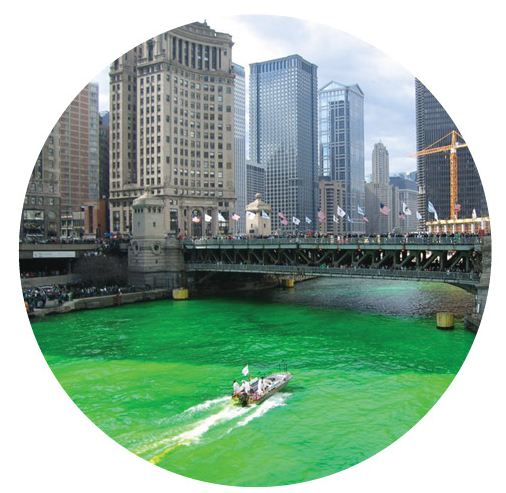 Shamrock
The legend: Saint Patrick, an Irish slave (although now historians think he was Scottish), escaped from imprisonment in France in the 4th centuryish and returned to Ireland and converted the masses by using a three leaf shamrock to explain the holy trinity. As it goes, as shamrocks grow everywhere in Ireland, so does faith – in the fields, in the earth, in the crack in the sidewalk. God is everywhere, the shamrock reminds us. Unfortunately, historians have never been able to link any mention of the shamrock to Patrick’s own writings, or to anyone who wrote of his work at the time. The first written account of any affiliation between Saint Patrick and shamrocks came in the 1600’s, a thousand years after his death. Still, it makes for a nice story.

Wearing Green
Oddly enough, blue is the national national color of Ireland. Blue is also the color most strongly associated with Saint Patrick (the man — not the holiday), but green is, and always has been, what comes to mind when people think of Ireland. The land. The sky. The sea. Green. Green. Green. If it’s Irish and it doesn’t have armpits—it’s green. After all, it’s the Emerald Isle for a reason. After massive waves of immigration in the 1800’s, Irish immigrants all over the world wore green as a point of pride and self-identification. Sort of like a gang without the meth or neck tattoos. Today, people wear green all the time, so when it comes to March 17th, the green goes big or goes home. Here in Chicago they dye the whole river green. Yes, for real. Know what color dye they put in to make it green? Orange. Weird, right? The tradition started in the 1960’s – some  city worked were trying to track pollution sources and used vegetable dye to trace illegal sewage discharges. Nowadays it’s a big procession and thousands of folks line up all over the river’s edge to watch a speedboat spew out the dye. It’s quite a sight! 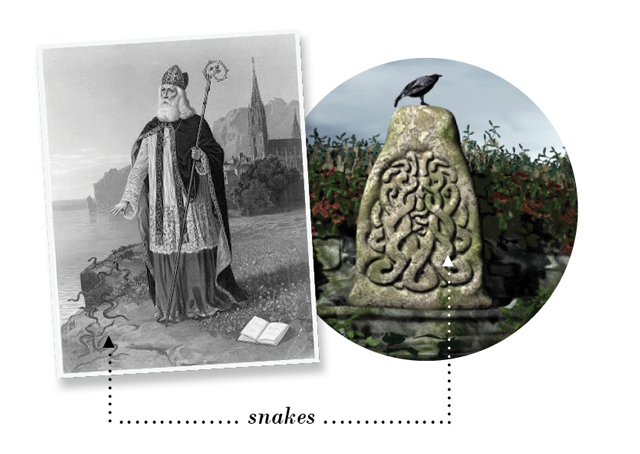 Snakes
As in, Saint Patrick banished the snakes from Ireland (or he killed them, or drove them out, or turned them to stone – depending on who you ask). Saint Patrick, in his fervent quest to spread his faith, may have done some not nice stuff to those who refused to convert.  The “banishing of the snakes” was really a metaphor for the eradication of Celtic/Pagan ideology from Ireland and the triumph of Vatican style Christianity. Pagans and non-believers were either killed or forced to leave the country – their language, their traditions, their ancient ways leaving with them or burned/destroyed/forbidden. When you hear someone say Saint Patrick turned the snakes to stone, it is because Celtic stone carvings with their interweaving snake motifs, are one of the few pieces of evidence left behind. Just to be fair and contrary, it’s worth mentioning that most historians downplay the fall of Paganism in Ireland, and even then, give very little of the credit to Saint Patrick. Also, recent academics have also gone so far as to painting Saint Patrick as a tax collecting, slave trading jerk. So that’s fun.

Ugh, am I disappointing you with nit picking apart all your favorite stories? Sorry y’all. This is a good book if you are into this stuff.

Four Leaf Clover
Pre-dating Christianity, Druids (Celtic priests) elevated plants with four leaves to the status of sacred charms, allegedly potent against malevolent spirits. Today, in every meadow of shamrocks there is at least one four leaf clover hiding in the crowd and some consider this a symbol of those who manage to maintain belief in both the new and old ways – the essential trinity and a little something extra. According to some (probably the folks at Hallmark), each leaf represents something: the first is for faith, the second is for hope, the third is for love, and the fourth is for luck. 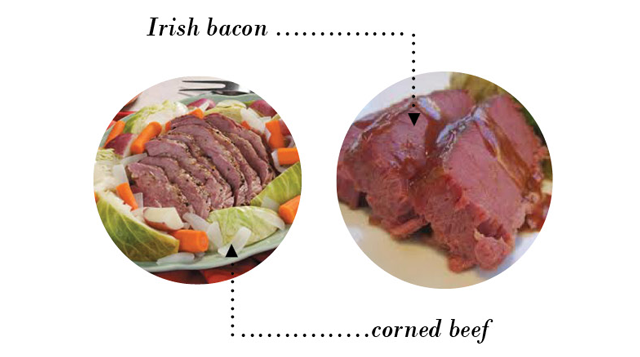 Corned Beef and Cabbage
Cabbage is a long-time staple in Irish food, while corned beef is not. In fact, according to a woman I know who was born and raised in Dublin, most people in Ireland think corned beef is pretty gross. Can you blame them? This tradition was started by Irish immigrants living on the lower East side of New York who could not afford traditional Irish bacon, so they learned about the cheaper beef alternative from their Jewish neighbors. Mazel!

Tangent: Like most of Ireland, I think corned beef is pretty gross, however, when it’s sliced deli thin and fried to crisp in a pan, it’s delicious. And it takes just like bacon. But less fatty. And better for you. This trick also works with certain kinds of roast beef. I’m serious – try it sometime on toast with lettuce and mayo. Tasty!

Leprechauns
The leprechaun is an impish male faerie who lives in remote places cobbling shoes for other mystical creatures. Because hey, goblins and unicorns need shoes too. Some people regard leprechauns as happy creatures, roughly 2’ tall, with red hair and a pipe, while others think of them as meddlesome and mean-spirited drunks, and nothing at all like the guy on the cover of a box of lucky charms. Speaking of lucky charms…

Horseshoes
This one is a mixed message. The tradition of hanging lucky horseshoes above doorways is a method of warding off faeries, who are said to hate iron. Leprechauns in particular. Supposedly, when you display a horseshoe you are saying, “Scram, Shorty, we don’t need your dirty shoes here.”

Rainbow
The rainbow’s symbol of hope and survival goes back to the Old Testament. After the flood and the deliverance of Noah and his family, God showed Noah the rainbow in the clouds as a sign of his covenant with mankind that he will never again bring a deluge to destroy them (Genesis 9:8-17). Oddly enough, in some far eastern cultures, rainbows are seen as bad luck because that is the time that snakes are most likely to be seen. Yes, in general, snakes and snails and worms always rise to the Earth’s surface immediately following extensive rain fall. No symbolism here, this is just something they teach you at camp.

Pot of Gold
It is said that if you can find where the rainbow comes down and meets the earth, you will find a big pot of gold and be the richest person in the world. If you have ever tried to chase a rainbow, you know how likely this is to happen. My unfounded hypothesis for this is that is comes not from any ancient folklore, but just generations of people living in poverty and dreaming that a better life would magically appear. Ireland is a prosperous country today but for hundreds of years that was not that case; lack of opportunity, religious oppression, wide-spread famine, blah, blah, O’Blah. Look, I won’t go all Angela’s Ashes all over you, but sufficient to say, there is a reason why I, and so many of my fellow American’s, can trace our heritage to a man or woman in Ireland who got up the balls to leave. 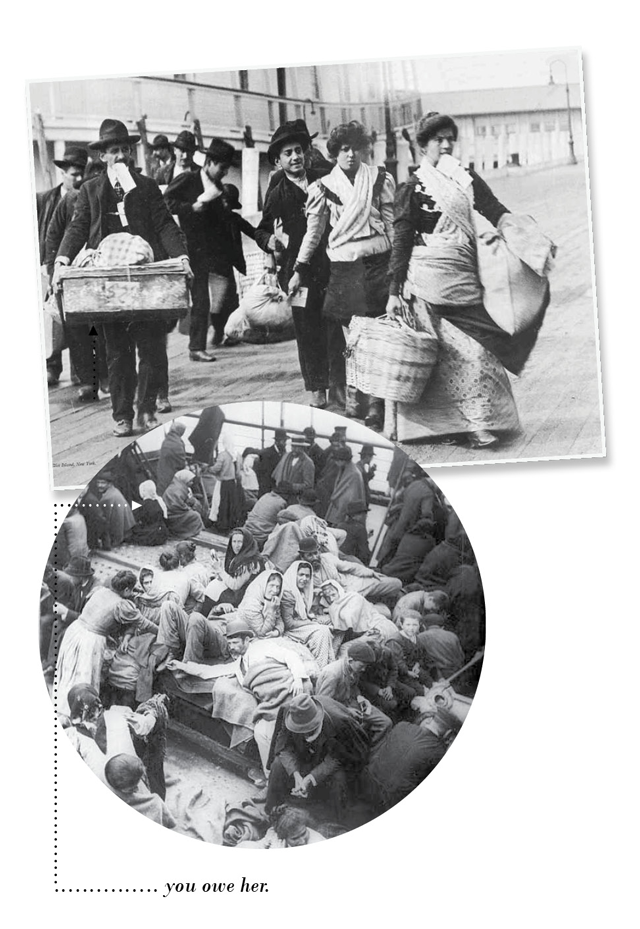 Nowadays I hear of friends moving to foreign countries and think how it must be traumatic for them – to give up life as they know it and move to a foreign place where they do not speak the language. Then I think of my relatives, many of them, more than 100 years ago, saving their pennies for years to cover a month-long passage in the hull of a ship, only to land in a country where they may or may not have known a soul, where they may or may not have spoken the language, where they may or may not have the tools to survive. No telephones. No Skype. No time for homesickness. Probably making barely enough money to cover food, much less the postage stamps needed to send a letter home.  Some days when I feel exhausted, I think of the dozen great-great-great-something grandparents I can claim who came to this country as immigrants. I think how brave it was for them to risk so much in coming here. I think how hard they worked, not just for themselves, but for their kids, and their kids…and for me. And you. And all of us.  I think of how much I owe them for the sacrifices they made. Then I get my butt back to work at finding that pot of gold at the end of the rainbow. Not for me, for them. This day is for them.

Saint Patrick’s Day isn’t just a holiday for those who are Irish, it’s a day for immigrants. For family. For all the nameless and faceless people who came before you and worked their butt off so that your worst days could be better than their best. This day is for them.

PS: Speaking of relatives…I am cutting out early this weekend to head south to be with my peeps in Mississippi. Saint Patrick’s Day in the south is something to see! There will be much parading, fellowshipping, tater totting, live musicing, pollen counting, Mardi Gras Indian dancing, and maybe a bag or two of Krystal’s hamburgers. It’s basically Eudora Welty meets Weekend at Bernie’s. I’ll be back later next week, but in the meantime, you can follow the fun on twitter.