If you have been following this blog for a few weeks, you may have noticed a common thread: kid art. That seems an odd thing for someone who has no kids (ahem, don’t tell the cat I said that), but, I think, if there was ever a time for children to feel included in celebrations through their own work, this is it.

I mean, who doesn’t love a handprint turkey? Even better – a construction paper feather crown. Or a family portrait done up in crayons and colored pencils. Who would ever spend money on glitzy decorations when homemade treasures are so plentiful?

Recently, my Aunt Pat discovered a piece of artwork I made for her when I was a kid. It is a drawing made shortly after I spent the day making kites with her husband, Big John. She shared it with me via email, and the moment it popped up on my screen, I nearly leaped out of my chair. 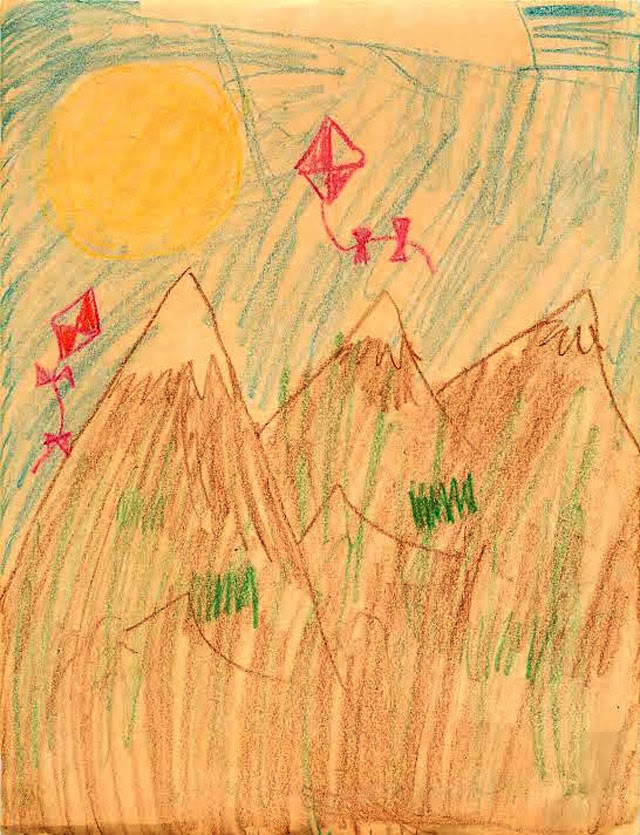 Three things I should tell you about this drawing.

And that’s the thing of it – art, kid art in particular, is infused with the sort of color, vibrancy and life-force I can only chase after as an adult. You can’t get that in a photo. You just can’t.


When the folks at Crayola approached me about becoming a sponsor, at first, I thought we would be a bad match.  I’m not a parent. I wear too much leopard. I don’t play with crayons and markers much enough.

Then I thought, Well, actually, a lot of why Thanksgiving is special is because it is tradition. Nostalgia. It’s about making memories.  And some of my best memories are triggered by something I made as a kid. In fact, without ever intending this to happen, Crayola has been a part of my life for thirty years. Some of my most treasured possessions are works created (by various artists of various ages) using Crayola products.

This is something I am thankful for.

I don’t know if you will be sharing your holiday with kids (big kids count too!) but I hope you will take a minute to do something creative. Pull out a box of markers. Get the paints. Be messy. Make some memories.

This post is sponsored by Crayola – an amazing resource for kid-friendly art supplies. Thank you for supporting AP sponsors.