I inherited a stamp collection.

It was my father’s from when he was young. It’s been fourteen years since he passed, and probably forty+ years since the box has been in storage. I only came into it over Christmas, and now I don’t know what to do with it. It is weird. I mean, it’s wonderful, but it’s weird. Actually, I sorta put off going through it for a few weeks because I wanted to have the time and mind space to process it.

For one thing, if you have ever lost someone, you know how haunting it is to see their handwriting years after the fact. I re-read my dad’s letters every June but this box is full of things he wrote long before I was born.  The whole collection is dived into little envelopes inside slightly less-little envelopes scrawled with things like “WAR” and “COMMI” and “$AVE” (btw, way to up one on Ke$ha, Dad!). These are words written on envelopes from places he went to school. Places he worked. Places he loved. Places I know nothing about.  Again – weird. 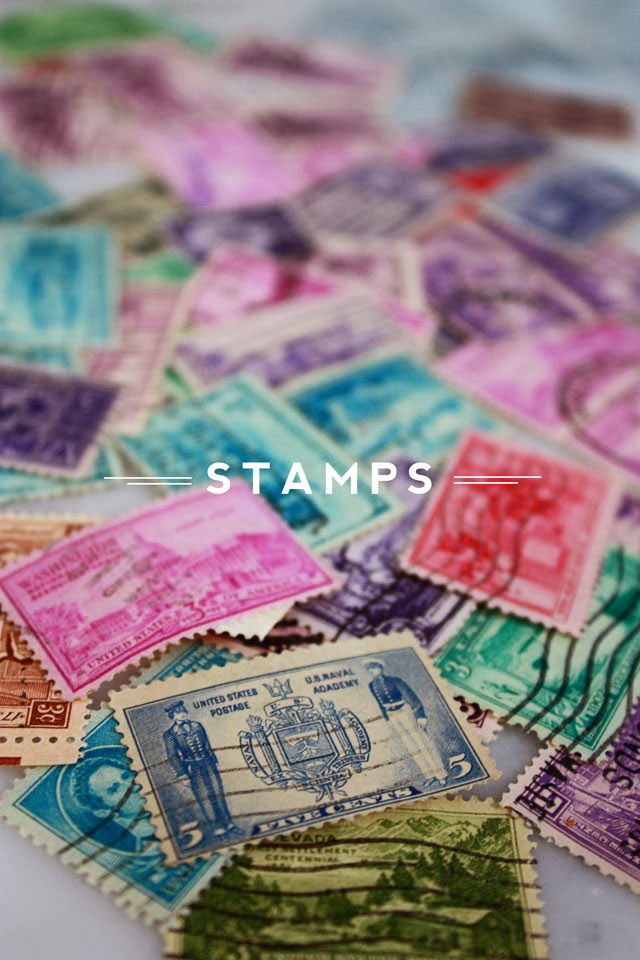 For another thing, the stamps. Whoa. There are so many of them. And I have no clue what to do with them…
I mean, I have no delusions of Antiques Roadshow grandeur – I’m never going to just sell one and buy a yacht, but yes, I’m thinking there is some value here. Of the ten I attempted to look up online, the price range was anywhere from 50cents to $30 each. And there are thousands of them. I mean, the whole collection fits in a shoe box but it packs a punch. Half of them are used/postmarked so that decreases the value I imagine, and honestly I don’t really want to sell them, but I don’t want to let them sit on a shelf either. They have been in a box for decades — now they deserve to come out and play. And if there are a few that are exceptionally valuable, I want to pull them out and conserve them properly. This is probably the only thing of monetary value I have ever, or will ever, inherit. It seems disrespectful to let it waste away. 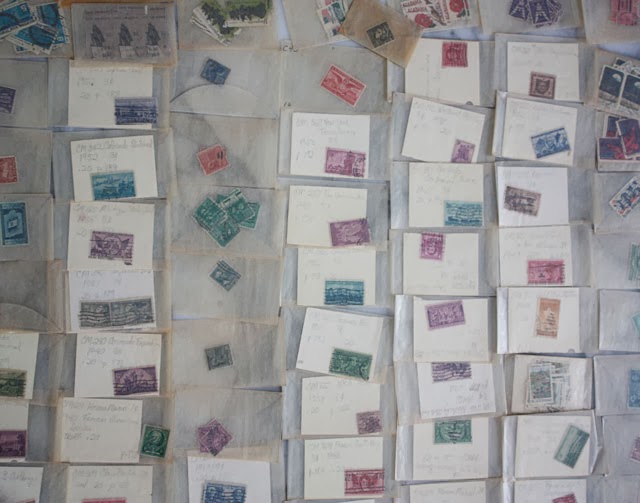 I should probably take them somewhere for an expert opinion. From looking online, it appears that people must inherit stamp collections quite a lot because there are dozens of services that do nothing but sort out old stamp collections (there is even a site called www.inheritedstampcollection.com, ha!). Have any of you ever used one of these services? Any recommendations? Anyone in the Northern Illinois area know of a reputable dealer? I feel like this must be an industry where sellers could easily get ripped off so I’d like to start with someone who knows what they are doing. I don’t mind paying a fee for their time, I just don’t want to walk into a scheme. I clearly have no idea what I’m doing here. There is no 1-800-Grandpa-Stamp-Collector service. (Or is there?)

I’m hoping after I sift out and conserve anything valuable, I’ll be left with a pile of old/used stamps I can use for display purposes. I’m thinking of buying an extra large, extra deep frame and foam-mounting a hundred or so of my favorites in a grid (not unlike what I did with these paint chip pieces years ago). Or something. I don’t know yet, I just feel like sticking them all in an album isn’t good enough. They ought to be in view, right? 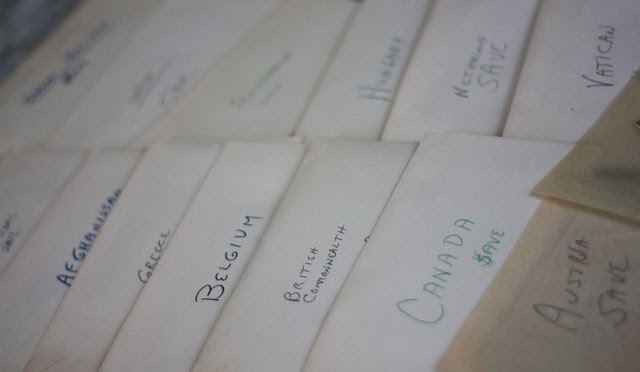 Also. This is interesting. The box has a bunch of postcards and envelopes he collected as kid that were to and from his father and grandparents, whom, oddly enough, according to the addresses I see here, lived in a house not far from an apartment I lived in when I was 22. Isn’t that odd? I walked by that house a hundred times and never realized that was where my grandfather (who died before I was born) lived most of his early life. I always remarked on that house’s garden though, which was very unlike me at that time. I can’t say I ever felt especially drawn to the house, but I definitely made a point to notice it and set it apart from the others on the street. Isn’t that crazy? 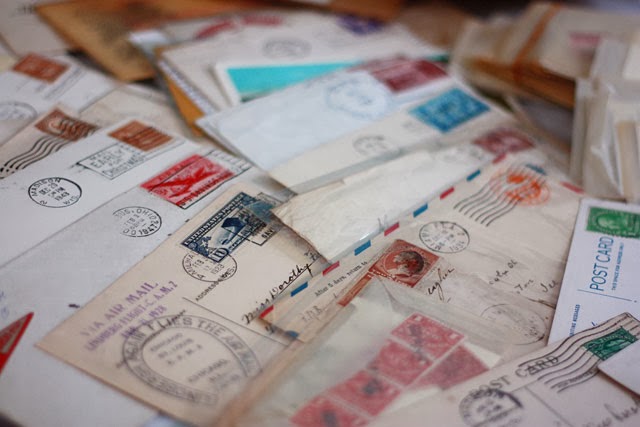 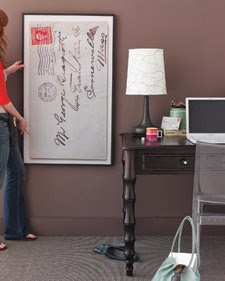 One of the postcards is from the early 1900’s. It’s in Hungarian and as best I can tell it was mailed shortly after they immigrated. Google translate tells me it’s something about a trip/voyage, but I don’t know what else, which is killing me. I’m desperate to know what it says. Not that it would matter now, but I can only imagine, if I had immigrated to a new country where I didn’t speak the language and hardly knew a sole, without a telephone or photograph to remind me of home, a postcard like that would have meant a great deal. It was saved for a reason. It was loved.  And now it’s been in a box for a century and nobody knows what to do with it. I know my dad saved it because of the stamp, but, I think I will save it for other reasons.

Since the postcards and envelopes are actually my favorite part, and they won’t be of much value to anyone but me, I won’t feel bad if I get a little crafty with a few of them. I love this copy machine enlargement idea from Blueprint magazine (RIP Blueprint!).

Can you think of any interesting ways to display postage stamps? I’m all ears.