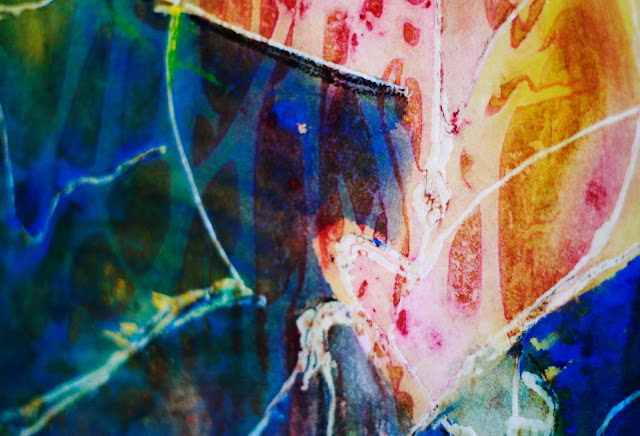 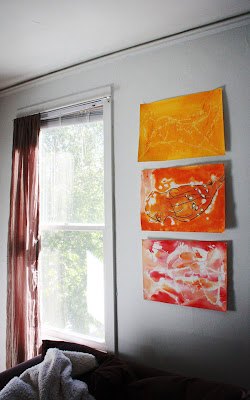 My friend Kiki called last weekend and I was all “I can’t talk now. I’m blowdrying toxic snot for the blog.”
So she said “Huh….why is your snot toxic? And why do you need to share it with people? No one wants to read about your toxic snot. It’s not that kind of blog.”
And then I told her it wasn’t mine, “It comes in a can, Kiki. Duh.”
And therein lies the beauty of rubber cement: not only does it smell horrendous and look like something that fell out of a toddler’s nose, rubber cement is ‘mildly toxic’ and if you try hard enough, it will induce the sort of headache that will make you rude to your friends on the phone.
Given the above description, you might be surprised to hear that I adore rubber cement. I use it constantly.  If I had year-round access to open windows, I would probably ditch white glue altogether in favor of rubber cement. Listen; it dries in minutes, is acid free, comes with its own brush, doesn’t wrinkle paper, it unsticks like that fancy “re-positionable tape” at a fraction of the price, and best of all, you can swipe away excess with a rubber cement eraser. Neat and clean every time. What is not to like?
Oh yeah, the toxic snot thing.
Well, let’s work on that…. 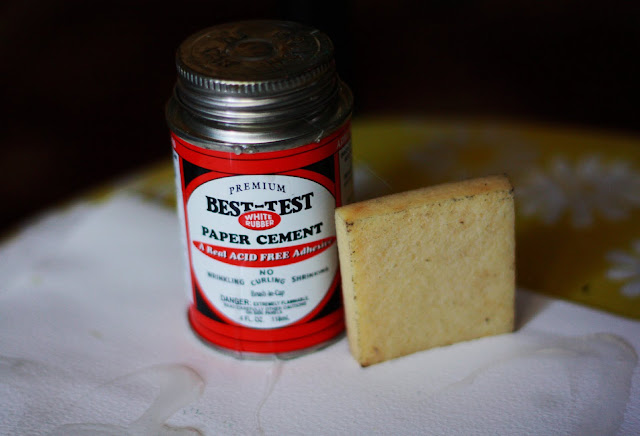 Back in January, Justin sent me an email about doing a post about adhesives.  I thought that sounded like a great idea, and yet, here we are, five months later, and I have yet to create a proper post. So, let’s not do just one post; let’s do several.
So, over the next week or two I’m going to post a short series of Fun with Adhesive projects based on using adhesives in new and different ways. Rubber cement, white glue, hot glue, various tapes and epoxies.
That’s right ya’ll: I said epoxies.
Sound’s exotic doesn’t it? Epoxy. Like the character name of some tall, beautiful, racially-ambiguous nightclub owner on a daytime soap opera.
Here is another soap opera name that means something else: Zephyr
And another: Angina. 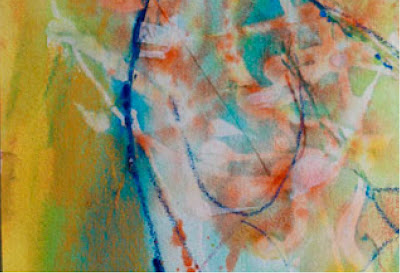 One time I had a mailman whose middle name, and honest folks—he showed me his license, was Cyclone. Is that the most badass name you ever heard?

Bet he never got beat up as a kid. I mean, who is stupid enough to beat on a kid whose mom is crazy enough to give her son a badass name like Cyclone?

Smart moms think ahead.
If any expectant ladies reading this want to give their kids middle names like Combatant and Verucca, feel free to steal my idea. Little Ebola will thank you one day.
Enough with the names, lets get started with the cement!
Materials: 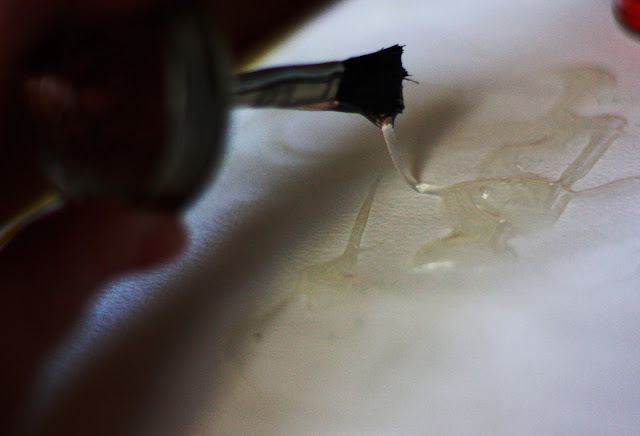 Start out by smearing the cement on your paper. You can follow sketch lines too, but I like it random. A thin layer will dry in 20 seconds or less. A thick layer will take a few minutes. Speed it along with a hairdryer. 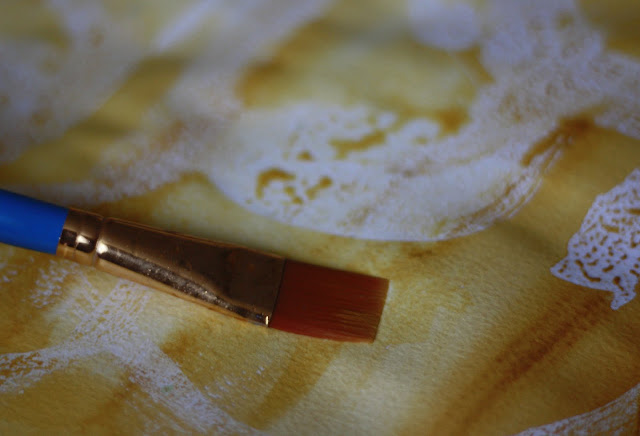 Once dry, smear on the paint. Notice how the paint beads up on the rubber cement paths –it’s blocking the paint from penetrating the paper. Watercolor painters sometimes use this same technique with masking fluid, but I think rubber cement works just as well. 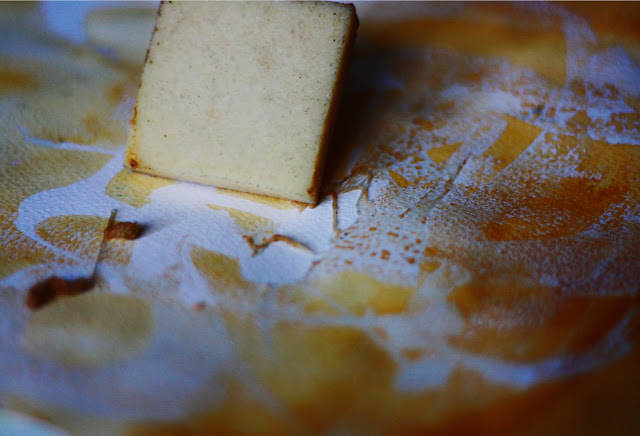 Pick up the excess cement and expose the under layer by rubbing the eraser in large swirling motions.  Avoid rubbing too hard in one spot or you will tear up the fibers. If you don’t have a rubber cement eraser, you can also rub with your fingers or wrap a thick and rubbery-rubber band around your thumb (like the kind that comes wrapped around a a pile of mail, or a newspaper –not the kind that you use in your hair). But dude, the eraser is like 50cents and works best, so really, save yourself the effort and get a proper rubber cement eraser. 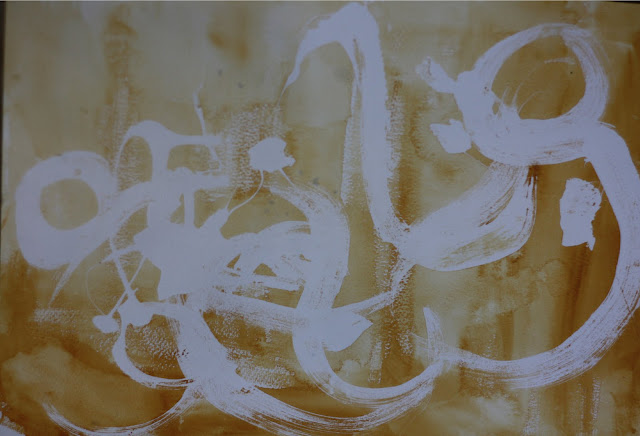 This is what’s left after you remove the cement. Nifty huh?
You could leave it as is, but let’s take it up a notch and repeat the process. 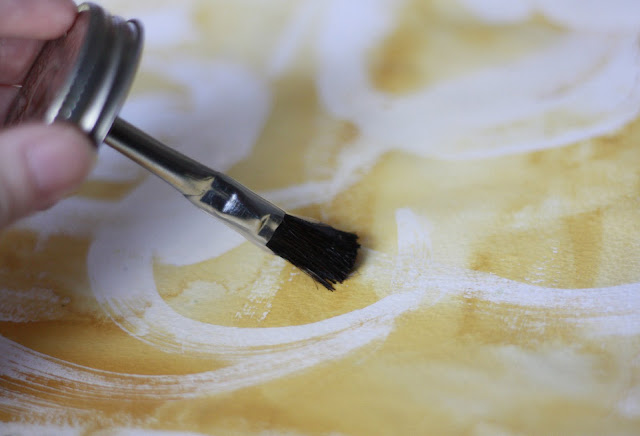 Lay on some more cement and let it dry. 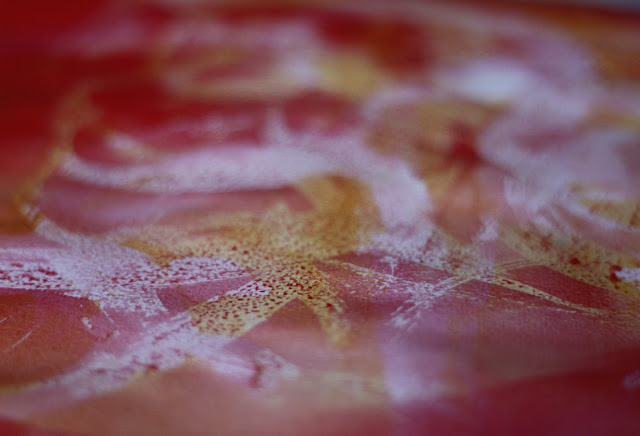 Paint on a second color in a deeper shade than the first, let it dry, and boom! 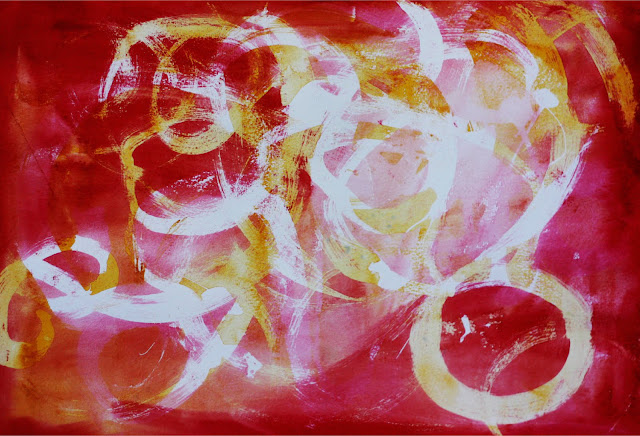 It’s not squares and grids plaid, it’s blobs and clouds plaid.  I should mention, I call this “plaid painting” because that’s what Mrs. Bellafonte told me it was called back in that day, but you can call it whatever you want. Check out Flamingo Scraps to see a more traditional sort of plaid –nifty stuff. You can see how easy it would be to layer grids over and over, making new shapes and lines and grids….someone smart would probably try to squeeze a math lesson in there, but I urge you to resist. Resist the math! 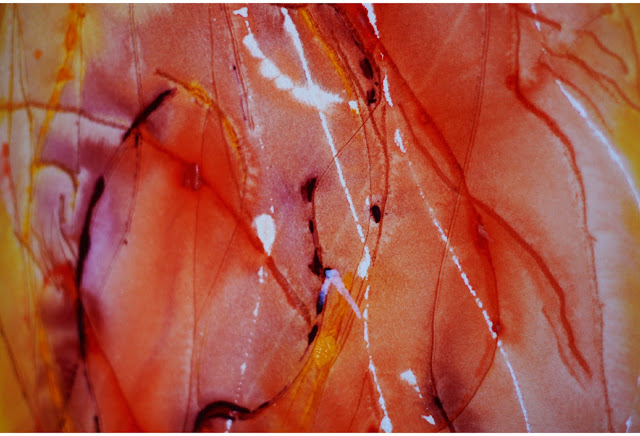 Variation: want to keep some white lines? Before you start with any cement, use white glue to draw on your paper. Make sure it dries thoroughly!
Variation: Add some black lines or draw something fun on top. This is a cropped abstract of a larger piece. You can’t tell, it’s supposed to be a woman. From here it sort of looks like a walrus.
Hey Walrus! 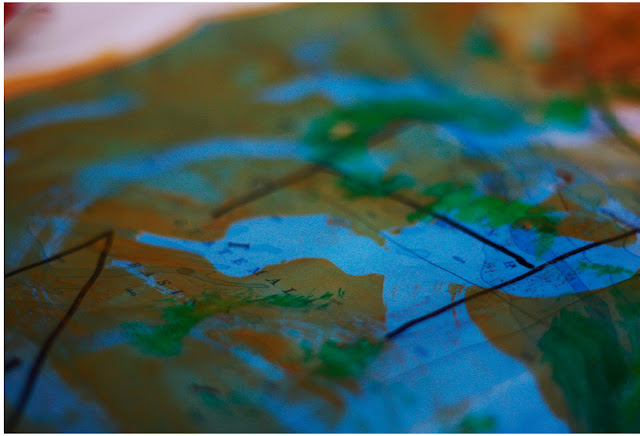 Or use patterned paper. Like a map. Or wrapping paper. Warning: it will eventually tear with multiple eraser rubbings, but you should try it. Totally worth it.