I’m taking a unique approach to my holiday decorations this year.

Not unique like Pablo the Burrito Unicorn, I mean unique in that I’m doing it a little different. This year I’m embracing a non-Christmasy approach Christmas decorations.

Yes, I’m still doing up the trees and garlands and the cookies and The Carpenters….but when it comes to making new stuff this year (’cause I make a lot of stuff every year), it’s going to be stuff that lasts a lot longer than a few weeks in December.

Why? Because I am tired of people telling me it’s wrong to have holiday stuff up too early or too late. That’s fine for them, but if I try to cram it all into a few weeks in December, well, I don’t get to enjoy any of it! I’m tired of choosing hot glue over hot toddies. Eff that.

So this year I’m starting early and I’m casting a wide net. I’m making stuff that can be up Halloween to Easter and anytime in-between.

Don’t tell me you can’t sparkle in March. I’m not buying that crap. 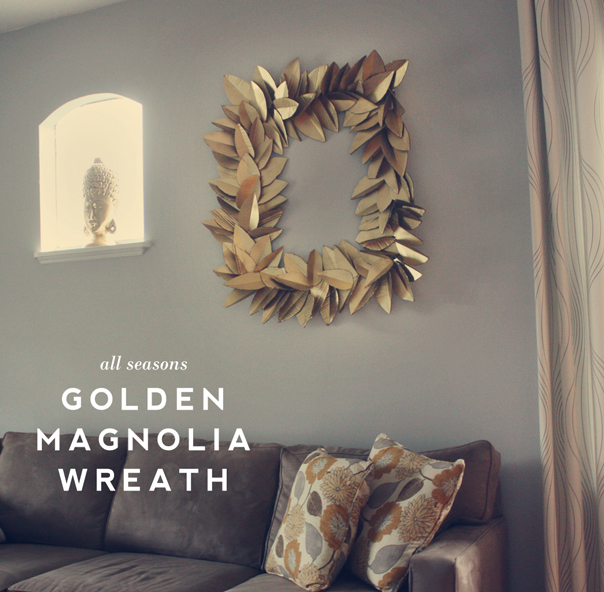 Can I just tell you how HUGE this thing is? Because it’s HUGE. It’s hard to reflect the scale of this thing in pictures. It’s so big I didn’t even have room to hang it in my house so I gave it to my friend Kiki to hang above her Delaware sized sofa. It seats ten people and needed some big artwork to balance, which is good because if I didn’t mention, this wreath is HUGE.

I might need to make another one. A smaller one. Because I had been wanting a squarish gold magnolia wreath for years and I’m a little sad I don’t get to keep this one. I have a long-standing thing for Magnolias and gold is my new best friend. The square concept I picked up from the William Sonoma catalog a while back. My brain mixed them together and a vision was born, although it’s taken me years to put it n motion. 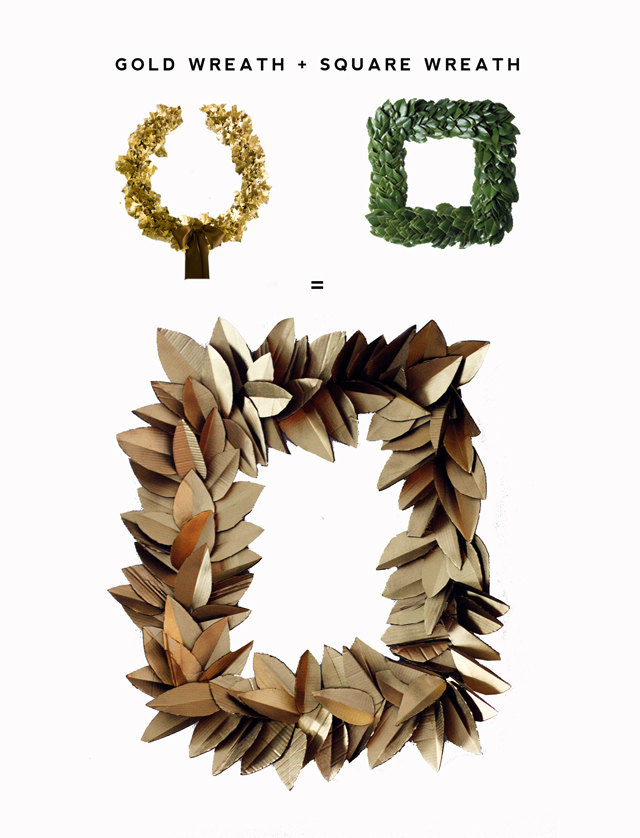 *If I lived south of the Mason-Dixon I probably would have used real magnolia leaves, as they are hearty and plentiful. I can find magnolia trees here in Illinois but the leaves are usually pretty scrawny and have fallen by late September. So instead I used something I had laying around the house: cardboard boxes. 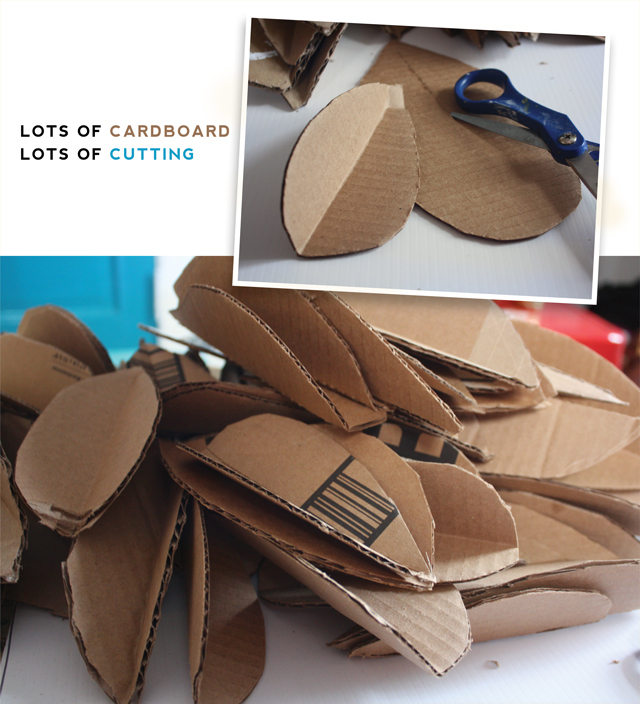 Directions
Flatten out your cardboard boxes and cut leaf shapes roughly the size of your hand. Quantity will vary depending on size. I cut out 100 leaves while watching TV over a couple nights, but you could get away with something much smaller. I suggest cutting cardboard with kitchen shears as it’s a lot easier than with regular scissors. My local dollar store sells some that are great for this purpose.

Using an exacto knife or one side of a pair of scissors, score each leaf directly down the middle and fold slightly. 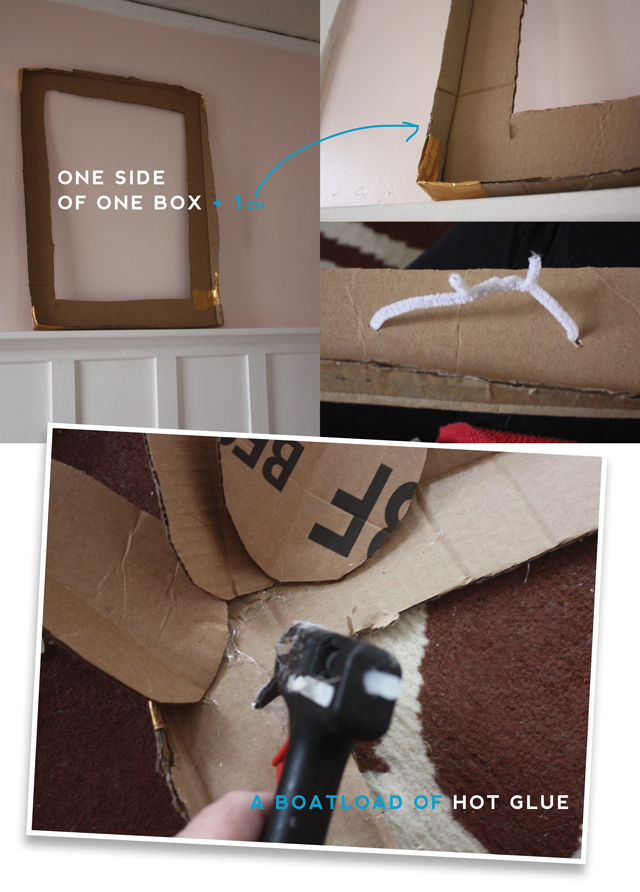 Create the base frame of the wreath by cutting off one side of a large box, leaving a small ridge around the edge. I had to reinforce my frame with a little gold duct tape. Did I mention I like gold?

Before attaching the leaves, poke a couple of holes and slip in a ribbon or pipe cleaner — something you can use to hang it on later.

Use hot glue or silicone adhesive to attach the leaves to the frame one by one, using the 1cm ridge along the edge to help prop up the outer leaves. Mucho dimensional.

*Note: I used hot glue, and that’s fine, but hot glue tends to slowly dry out. If Kiki decides to keep this up over the years, the glue might give out and the leaves would fall off. No bueno. This problem could be avoided altogether if I had been patient and stuck to using big blobs of silicone glue from the hardware store. I may still go back and reinforce the leaves from the back. Learning curve. 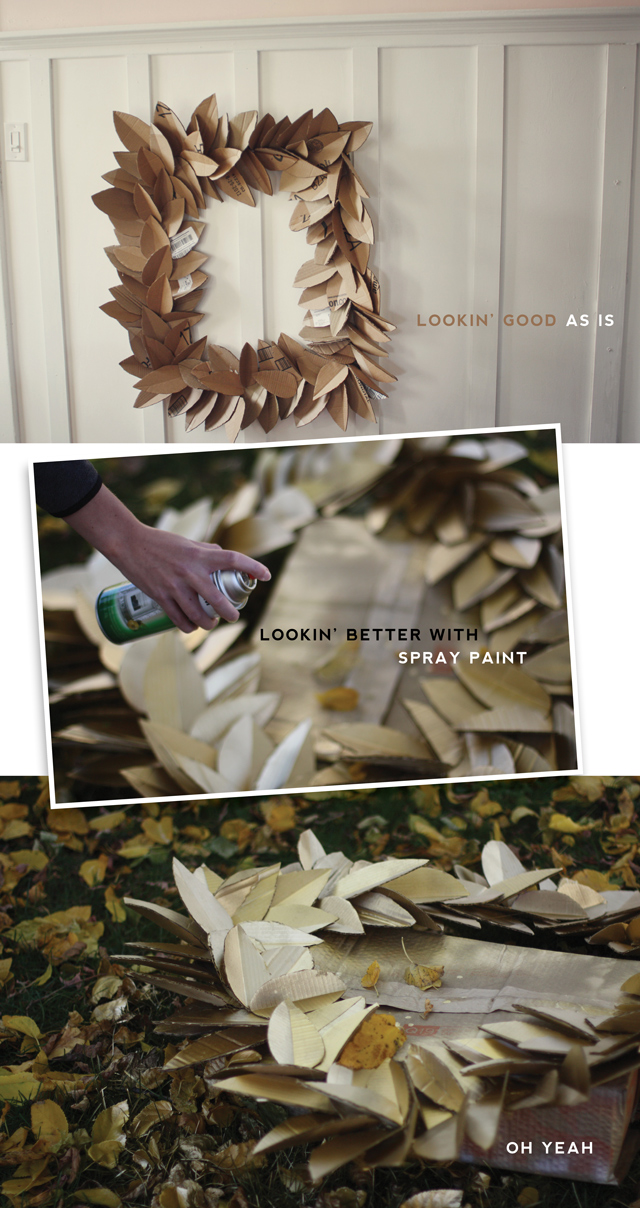 Now, had I realized the bare cardboard leaves would look that good, I probably would have taken my time to cut the leaves in a way that excluded bar codes and shipping stickers….but given the situation, I decided to move ahead with spray paint. Gold makes everything better. 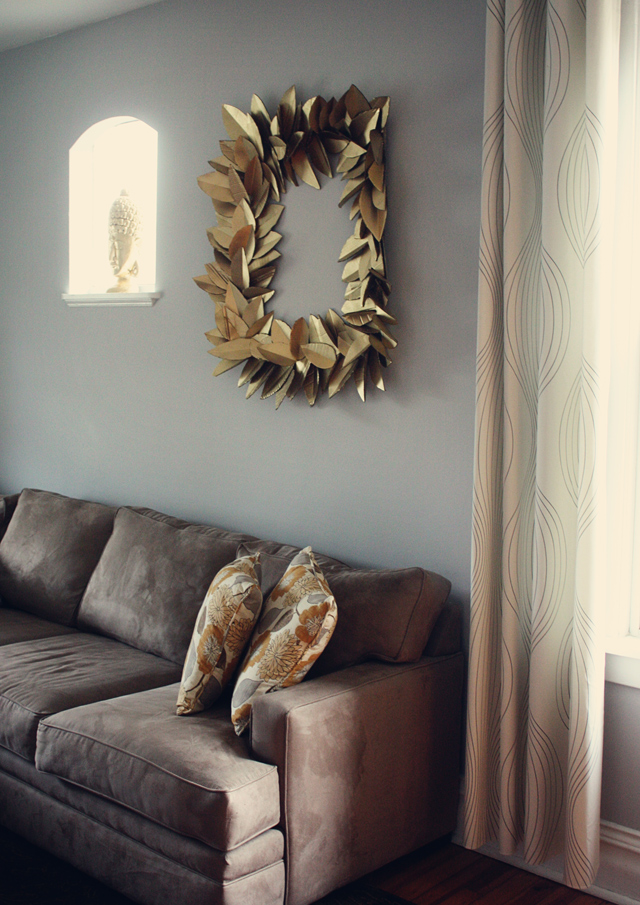 …and it’s gonna be hanging up there for six months.