So there was this guy named Wenceslaus. He was king. Good King Wenceslaus.  He got murdered by his brother in 935, but before he went down they wrote a song about him and what he did on this day, Saint Stephen’s Day, December 26. You probably know the song, but just in case here are the words below (or just click here to read along with the song, courtesy of the Irish Rovers).

Good King Wenceslas looked out, On the Feast of Stephen
When the snow lay ’round about, Deep and crisp and even
Brightly shone the moon that night, Though the frost was cruel
When a poor man came in sight, Gath’ring winter fuel
“Hither, page, and stand by me, If thou know’st it, telling
Yonder peasant, who is he? Where and what his dwelling?”
“Sire, he lives a good league hence, Underneath the mountain
Right against the forest fence, By Saint Agnes’ fountain.”
“Bring me flesh and bring me wine, Bring me pine-logs hither
Thou and I shall see him dine, When we bear them thither.”
Page and monarch, forth they went, Forth they went together
Through the rude wind’s wild lament, And the bitter weather.
“Sire, the night is darker now, And the wind blows stronger
Fails my heart, I know not how I can go no longer.”
“Mark my footsteps, good my page, Tread thou in them boldly
Thou shall find the winter’s rage, Freeze thy blood less coldly.”
In his master’s step he trod, Where the snow lay dinted
Heat was in the very sod, Which the Saint had printed
Therefore, Christian men, be sure, Wealth or rank possessing
Ye, who now will bless the poor, Shall yourselves find blessing.

Cliff notes version: King sees poorly peasant dude gathering fire wood in the freezing cold, then invites him in and buys him dinner. Then later, King and page are walking home in a snow storm, and King walks before him to lay tracks and lessen wind drag for the page. Nice dude, huh? 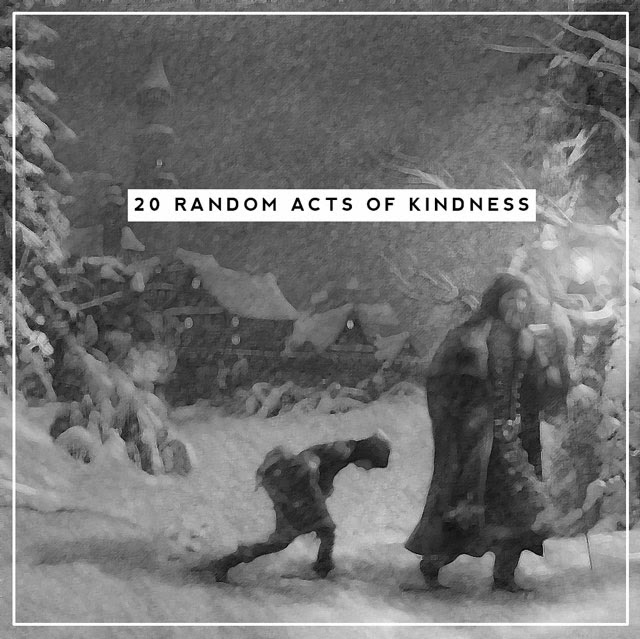 In a nutshell, King Wenceslaus was all about random acts of kindness.

No, really. I stopped posting after a couple of months. And not because of traffic – it got a lot of traffic. I let it fail on purpose.

For one thing, even though it was a very simple concept, I had a hard time keeping up with it – the daily post schedule was too ambitious, and between work and this site, I dropped the ball over and over again. And even if I had more time, just finding source material was difficult. Here is something you might not know: Everyone can recall being nice to a stranger, but very few people can recall a stranger being nice to them. I italicize recall for a reason.

Because here is thing, even people I know in person, and even those who have received a random act of kindness from a stranger in front of my very eyes, could not recall ever being on the receiving end. Even when prompted. By me.

Easily, 90% of the submissions to I Believe in Strangers were from folks reporting nice things they had done for other people, which, was wonderful for me to read, but it says something us as people. Why can everyone remember being on the giving end of a random act of kindness, but can never recall being on the receiving side of things? How can everyone be giving while nobody is receiving? The math does not add up. This put me up for a bit of contemplative searching, and, if I can be honest here, I didn’t like what I found.

Sometimes people would send in a ‘Let me tell you about this great thing I did for somebody!’  and then, they’d  email a week later to ask why I had not published it on the site yet. What do you say to that?  It was frustrating. Here, I thought it was a wonderful, simple concept that I could use as a New Years Resolution, and it became a major source of irritation that shook my faith in humanity. Talk about butthurt.

So.  As 2013 draws to a close and I take inventory of the what has come, I will say that, for totally selfish reasons, starting I Believe in Strangers was one of the worst ideas I ever had….it was also one of the best things that ever happened to me. I gleaned so much from those who read and wrote in those few short months. Since my takeaway from this project was GOSH, THERE ARE A LOT OF SIMPLE WAYS TO BE NICE TO PEOPLE, I thought this might be a good opportunity to list a few of my favorites.

If someone reading this can take away an idea to help someone else, fantastic. If it allows me to close the year and lessen the sting of failure, I’m in. Let’s start 2014 on the right foot. A kind foot. Can feet be kind? Okay. You get it. Let’s go:

« Where are you, Christmas?
Paper Bag Organizers »