You know what they say – nothing says romance like hot glue and a vacuum canister full of confetti. Okay, maybe they don’t say that, but it’s an annual valentine tradition in my house. Every year I make another batch of these hot glue confetti hearts and every year I love them more. Now that is romance! 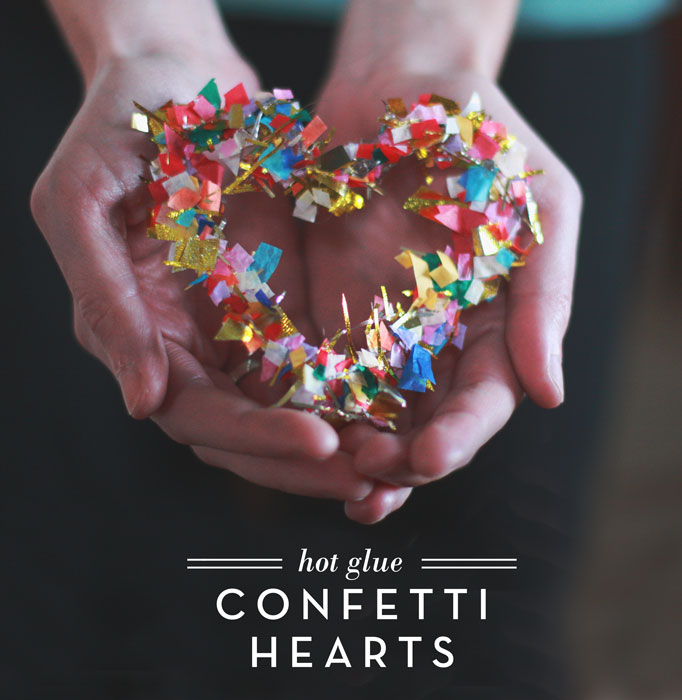 I published a tutorial on these hot glue confetti hearts over at ElizabethBanks.com a couple years ago. Unfortunately, her site turned into a Tumblr account a while back and the content on the old platform went away, including my tutorial. Sad face. This means, every few weeks, I get an email from someone who found the project on Pinterest but doesn’t know how to make them. There are multiple reasons I didn’t/couldn’t recreate another photo tutorial, so I’m using this as an excuse to take the next leap: video!

Many thanks to Kristen, my video guru, for getting this off the ground. I have wanted to learn video editing for ages but it’s never gone past the occasional cat video on Instagram (the rambling tour of my craft studio shot on an iPhone doesn’t count). As this is my first stab at video making,  I trust y’all to let me know if this is something you want to see more often. Video takes a lot more time to pull together than my standard posts (a lot!) but I can see how it shortens the learning curve. And it’s sort of fun for both of us. For sure, it’s new territory. I have watched more craft videos in the last two weeks than the last two years combined, so I am a new (BUT VERY DEDICATED) club member.

Do you watch creative/craft/instructional vidoes on Youtube? Let me know if you have a favorite channel. I would love to check it out!