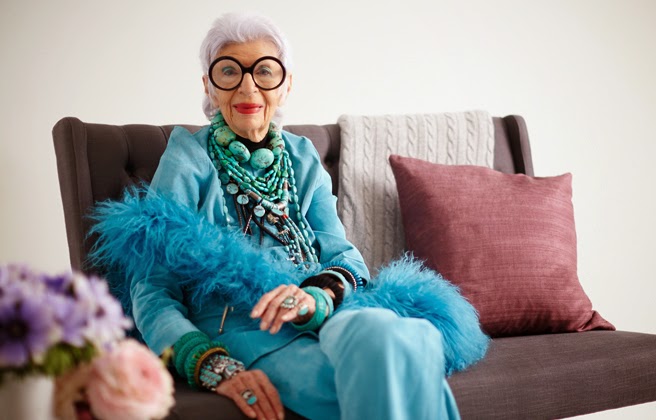 Iris Apfel, my idol, is having a cyber garage sale.

Sounds like she will be selling a little bit of everything. Will probably be expensive. If I’m priced out I’ll take it out on her collection at HSN, but I’ll be crossing my fingers and kissing my lucky dice just the same.

In the meantime, let’s just take a moment to remember why Iris is awesome.

This one right below was shot as a promo for her line of MAC cosmetics (sadly, no longer ins stores). Double snaps to MAC for choosing a 91-year-old cover girl.

She gets even better when you hear her voice. 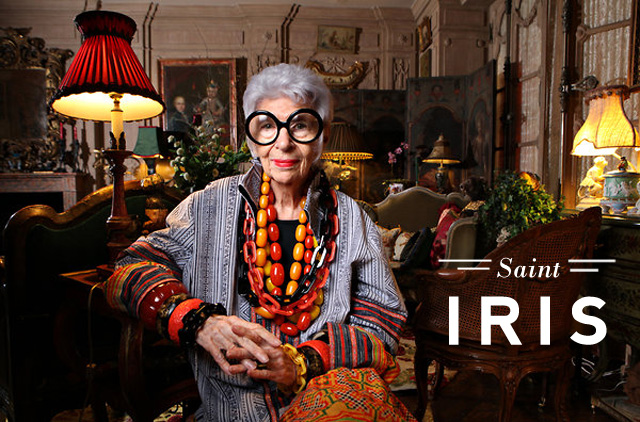 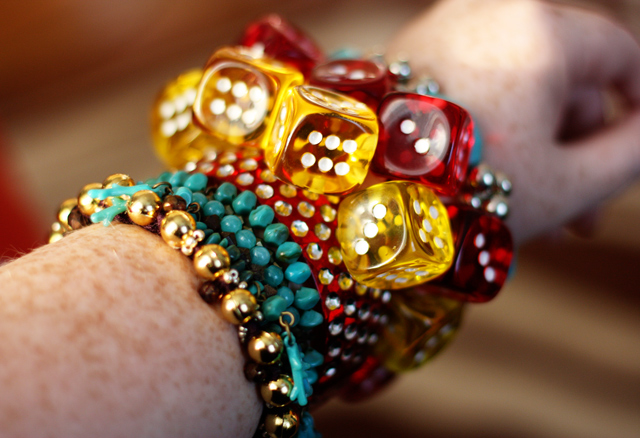 I love bracelets.
Bracelets love me.
We are in love.
And despite the fact that I have the wrists of a rhinoceros (and often resort to making my own), I never feel so pretty and dainty as when I wear an arm full of jangly bangles — something I do quite frequently. Thought I would take a photo of what my arm looks like this morning to share with you guys. Five bucks says someone is going to ask the question I always get; “How do you type with those things?”

The other question I always get; What is the trick to layering miss-matched bracelets?

This is a tip I learned from window dressing years ago: always wear at least three (four or five is better) and make sure two of them share a common element like color or shape or material. In this case, the common element is dots. Yes, dots. The dots on the dice match the bevel rhinestone dots on the red bracelet next to it. I could stick those two together and wrap my wrists with Barbara Bush’s pearls and it would still look good. And believe me, I have tried it.
Also, it also never hurts to make sure one of the bracelets dangles off a bit. A little dangling never hurt anybody. Unless you operate dangerous machinery for a living, in which case, forget about the dangle thing. 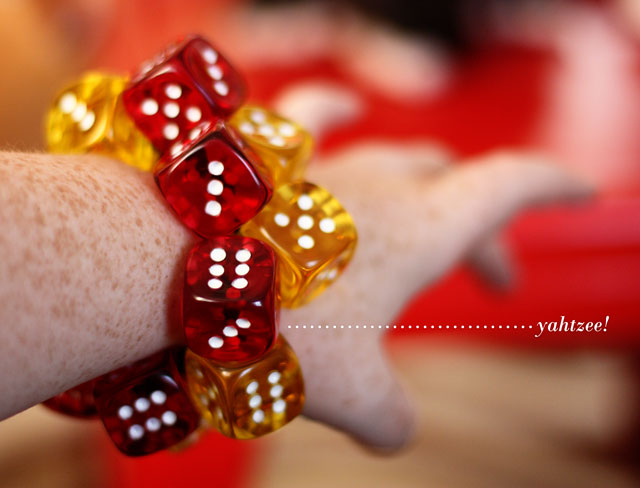 This big hunkin’ dice bracelet is from HSN.com. That’s right — the Home Shopping Network! And here you were thinking they only sold birthstone rings and dolls with teeth. Not so, my friend. I’m shocked to say it is still on clearance (how this did not sell out months ago I will never know) and it’s from the queen bee of layered jewelry, and my personal hero, the glorious Iris Apfel. If you have big wrists like me, this one is a winner! If you have skinny little flopsy wrists you might want to steer clear of this (but check out these butt-kicking wooden beads.)

I’m taking a break through the end of August and posting nothing but pictures… Details here.