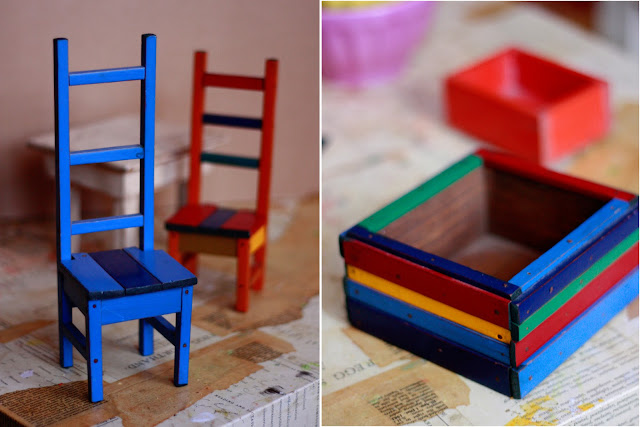 I was cleaning out some old storage containers last weekend when I found these wooden chairs and boxes that my Uncle Joe made for me many years ago. 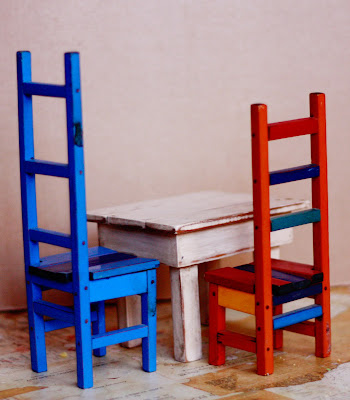 They got packed away the last time I moved only to be unearthed now, after years in hiding. It’s funny, I used to look at these as everyday objects but now that they have been away for a while, it’s much easier to appreciate their value. His artwork is all over my house, and even though it’s special to me, sometimes it becomes so familiar that I fail to stand back and admire and appreciate it as much as it, and he, deserves,

Uncle Joe started selling his artwork long before I was born, but despite his success and artistic chops, he has never been pretentious about how we treated or displayed his work. I think he liked the idea of my Barbies sitting down for tea time in these chairs. I think he liked the idea of using his boxes to store my stickers and clip-on earrings. I think he was, and is, uncomfortable with the idea of his work being put on some sort of pedestal, which is funny because he was always the first person to put my own work on a pedestal, crayon doodles and all.

Unrelated Tangent: unless you are exceptionally confident in the child’s artistic abilities and *you* are directly responsible for stain management in the home, NEVER GIVE A NINE-YEAR-OLD OIL PAINTS.

…my Dad eventually had to hide them from me for fear I would paint that cat Cerulean Blue, but not before I finished a simple 8×10” canvas of a street light. It wasn’t much to look at, but as I recall there was an excess of texture, something that makes just about any piece impressive looking to amateur painters. I called it Rapunzel Fire Hair.

Sadly I do not have a photo to share, as Uncle Joe was so impressed with my artistic skill that he wrapped up the canvas in brown paper and sent it to one of his gallery contacts in Santa Fe to see if they would be interested in carrying a “young and upcoming artist.”

Two weeks later a letter arrived at house addressed to me. It was on formal letterhead (a first in my book) and included a check for $25.00 made out in my name (another first). The note indicated that the gallery was not carrying oil paintings that season, however, they wished to keep Rapunzel Fire Hair as an addition to their private collection, and as “down payment on future opportunities together.”

As you can imagine, I was over the moon and envisioned a lengthy career as an oil painter, in Paris of course, wearing blousy white shirts and eating croissants day and night.

Sadly, a few years later, in the middle of an adolescent tantrum, as I threatened to run away to Santa Fe to become a wildly successful painter of street lights, my Dad informed me of the truth: Uncle Joe had put the gallery up to it. He sent a letter to his friend the curator, and $25 check of his own, requesting they send me an encouraging rejection letter and a check for the same amount. Uncle Joe knew that a single letter would encourage me and validate my work for years and years, long after the check was cashed, and even after I found out the truth.

« Here Comes the Sun…Doot In Doo Doo…
Button Button Who Got the Button? »