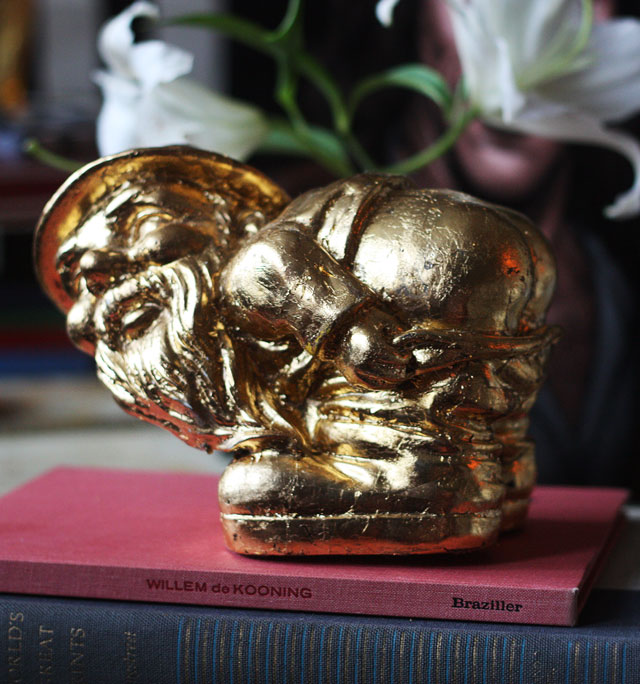 My childhood neighbors, the Robersons, liked to dip things in gold. Brass, actually. Shoes, watches, army hats, pieces of machinery…even a guitar pic from a guy who played backup for Elvis. Nothing was too good to get the dip.

The Robersons, a lively retired couple, were known across the neighborhood for throwing impromptu Samba parties in their driveway complete with Perry Como music and custom cocktails with exotic names like Swamp Gas and Singapore Sea Breeze.

Mrs. Roberson would don a sequin cocktail frock and wheel out the bar cart, while Mr. Roberson flirted with the neighborhood females, regaling war stories from his days in Korea. “See this scar? Man doesn’t get a scar like that at the beauty parlor, no sir, that’s a bohica burn that’s what that is. Battle of Old Baldy, that’s what that is. They never saw us coming.” And everyone would shake their head and click their tongues as if to say, I know. I know. I saw it all go down on M.A.S.H. last week.

Folks would bring their own glass, sometimes a bottle, and sometimes, on special occasions, Mr. Elfman from down the road would bring his world famous whiskey milk punch. I am not proud to say that, at age nine, my first experience with alcohol consisted of ten feeble sips of Mr. Elfman’s milk punch followed by a mighty spray of vomit across the side of Roberson’s garage. I don’t remember much after that, but one of the neighborhood boys later described it as, “The raddest spew ever!”

The next morning at breakfast, my father informed me that me that I would be going back to Roberson’s house to apologize for 1. Vomiting all over the side of their garage and 2. Drinking their booze without bringing any for the host. The issue of underage drinking never came up.

Mortified and still slightly whoozy from the milk punch, I ran over straight away, going so far as to offer to weed their garden or scrub down their garbage cans, anything they wanted, just so long as it didn’t involve another drink. Mr. Roberson, who also looked a little whoozy from the night before, slapped his knee and declared, “Charlene, let her polish the brass. I hate that sh*t and you’re too old to see straight.” Then led me to the library where I proceeded to spend the day polishing brass knick-knacks with a tube of Close Up cinnamon tooth paste.

Mr. Roberson was partner in a tool and die factory that made parts for heating and cooling systems—not what you might call glamorous work but made him a lot of money. So much so, every time a new cog or gizmo made him a dollar, he had that dipped in brass and mounted on a piece of wood to put on display in their home library. Business flourished and the collection never stopped growing. That afternoon alone, I polished enough brass pieces to fill the shelves of their wall-to-wall library bookshelves, plus Mr. Roberson’s highly intricate war-themed chess set, complete with brass canons with real cannon balls. “There’s real gun powder in them cannon balls. Don’t polish too hard, less you want to the amo to go and blow off your hand.”

It was hard work, but at the end of the day, I stood back, impressed with my work and declared to no one in particular, “One day I will be the sort of grown up who has a room full of golden knick-knacks.”

And here we are.

Last week my apartment was posted in a house call from Apartment Therapy, wherin I mentioned my “solid gold garden gnomes” which prompted an email from Alice, who asked, where are your gnomes and where can I get some of my own.

Well Alice, these are not only garden gnomes, they are naughty garden gnomes: one is pooping, the other is mooning. If I could have found one in mid-vomit, I would have purchased it too. SUBTLE NOTE TO FAMILY AND FRIENDS: MY BIRTHDAY IS AROUND THE CORNER.

The gnomes started out as traditional plastic garden gnomes—a gag gift. I always wanted to put them in my garden but feared they would get stolen or offend someone. Then I though, well, if I am going to offend someone, why not do it in solid gold. Tastefull. Trump-like. I always wanted a room full of solid gold knick-knacks. No time like the present.

The pooping gnome was painted in antique liquid brass, and the moon gnome was done in 24k gold leaf, because, you know, I like to keep it classy. 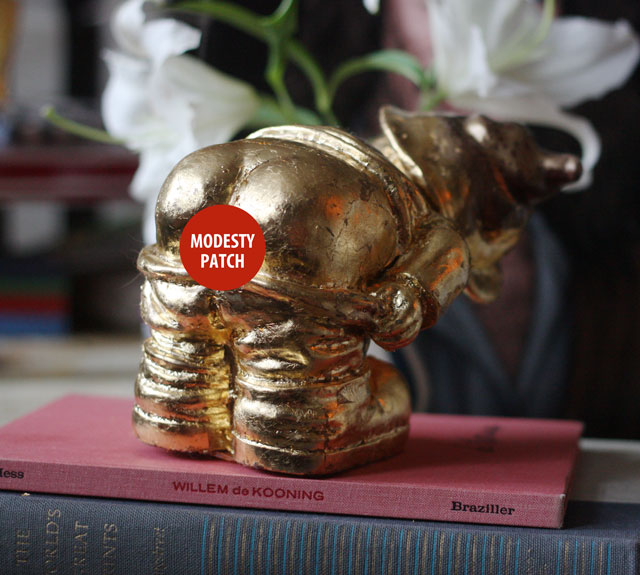 « Well now we know how I’ll be spending the weekend.
My Kitchen Window »