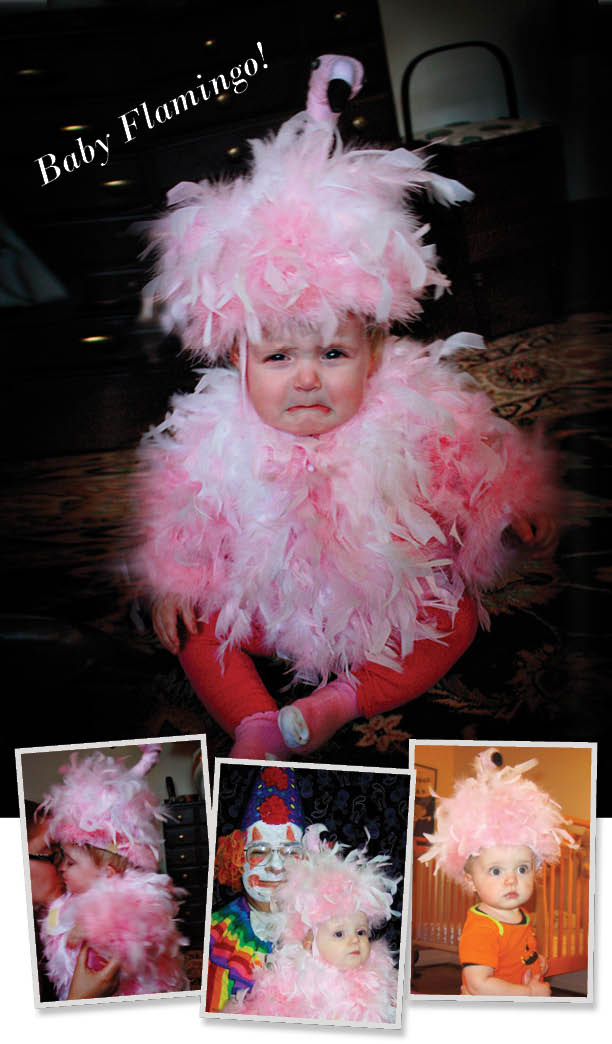 Earlier this week I was working on Abigail’s Halloween costume and couldn’t help but look back at last year’s flamingo costume. I know. It’s amazing. Isn’t she the cutest thing you ever did see?

Now she is a year older and a year bigger. All she wants is Elmo. I offered to make her an Elmo costume but Bubba and Kerry thought dressing as Elmo might confuse her (“Where is Elmo?” “Who is Elmo?” “I am Elmo?” “Elmo is me?”) which is a valid concern. She’s not even two years old and already pushing the boundaries of Existentialism because THAT’S HOW GENIUS SHE IS.

Sorry for the shouting. It’s an Aunt thing.

Today I was chatting with Kelly who mentioned her son Jack is wearing an Elmo costume this year (Jack is a little bit older and can handle the Elmo-Is-Me soul prodding)…she mentioned that after Halloween, “you could easily make into a pillow or something.”

If Elmo could be turned into a pillow, could any costume turn into something else? Like, for instance, could I sew up the edges of an abominable snowman costume and stuff it with batting and leave him to sit on my stairs year round?

Or, this Kermit costume? What if I stuff a giant Kermit costume with chicken wire and raw cotton and and leave him hanging around the house when I’m not there. That’s a burglar deterrent if I ever heard of one. I mean, who would rob Kermit? If I was a burglar and came to someone’s house and found a life-size Kermit doll sitting on the couch, reading a magazine, eating crackers and all, I would think, “Damn, there is some freaky business going on in this house. Let’s hit them up next door.”

So now I pretty much need to purchase or make an head-to-toe adult size costume this Halloween. It’s a matter of safety. But what costume? Hmmm….

« Who wants to come sit on my porch swing?
Uncle Art: There’s a story here »