Google the term “World’s Fugliest Painting” and you will get 51,700 results.
Then last weekend at Goodwill, I hit #51,701.
It was beige. It was flowered. It was HUGE. It was $7.00.
Ladies and Gents, do you know how much a 4’x5’  canvas at an art store costs?  A Helluvah lot more than $7.00, that’s for sure. And this one came framed in that odd bronzy colored metal that makes one think of old people’s homes from the 1980’s. HOW COULD I NOT BUY IT?
I bought it.
I decided to paint over it hang it over my kitchen sink. You just don’t see a lot of art hanging above the kitchen sink now do you? I decided I would be the first. Then I decided that not even I had the balls to subject my splatter painting skills to my battlefield-on-the-beaches-of-Normandy-style dish washing skills, and thus began my afternoon journey with what is known as Mod Podge: Nectar of the Spangled. 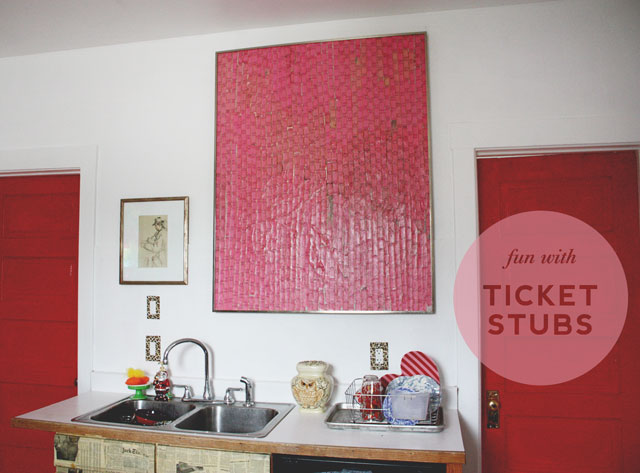 Sure, I could have decoupaged anything with Mod Podge, but I decided to use ticket stubs because 1. They were in my drawer already in this was one of those projects that was done on the NOW NOW NOW2. They were pink. I miss my pink kitchen. Did I tell you I painted my kitchen white? It was about a month ago….
And yes, that was another impromptu NOW NOW NOW project. That’s very like me – waking up early and deciding to paint a whole room using whatever supplies were already in the basement, by myself, with no help or pants. Know what’s very unlike me? Painting things white.  Chartreuse, maybe. White, no.  Though, it was a good call, I must say. The room felt cleaner and fresher than it had in months. It’s not that I was physically cleaning the room and different,  that’s just the power of good quality bright white paint – it makes other things look better by comparison. 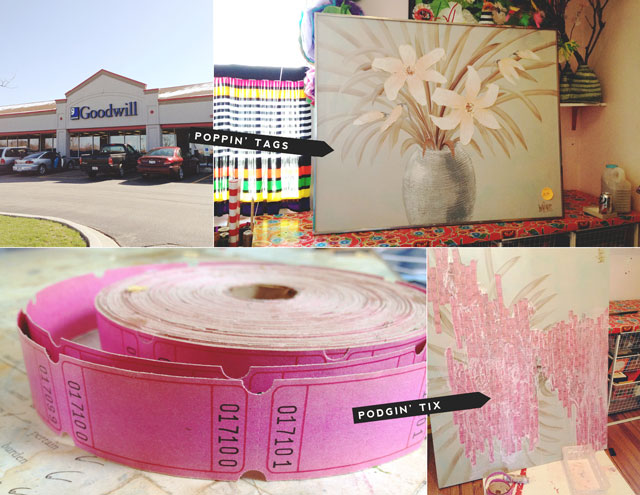 Anyway, no real tutorial here. All I did was mix a 50/50 batch of water and Mod Podge in a plastic shoe box, then let the tickets soak in there for 5 minutes to get good and saturated. Since I was working in strips of five to ten, it only took half an hour to get all the tickets adhered to the canvas. Then I added a couple more clear coats to seal, Et voilà! Big Pinky was born! 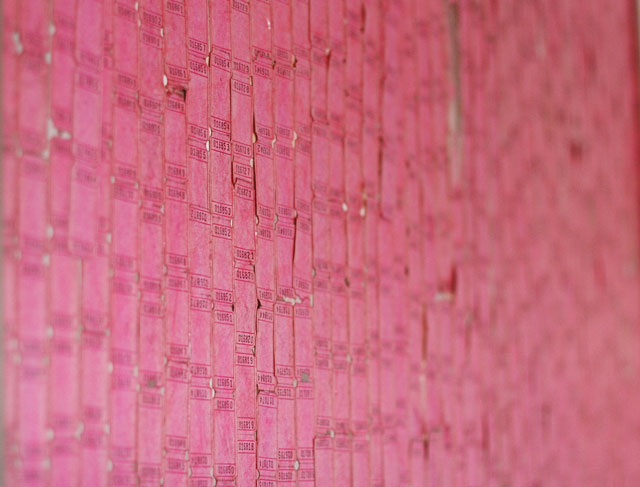 Because the roll of tickets was a few years old, there is a lot of variation in the coloring. Some are bright pink while others are closer to pinkish gray. Others got so tattered by soaking in the glue mixture, you can barely see the print. 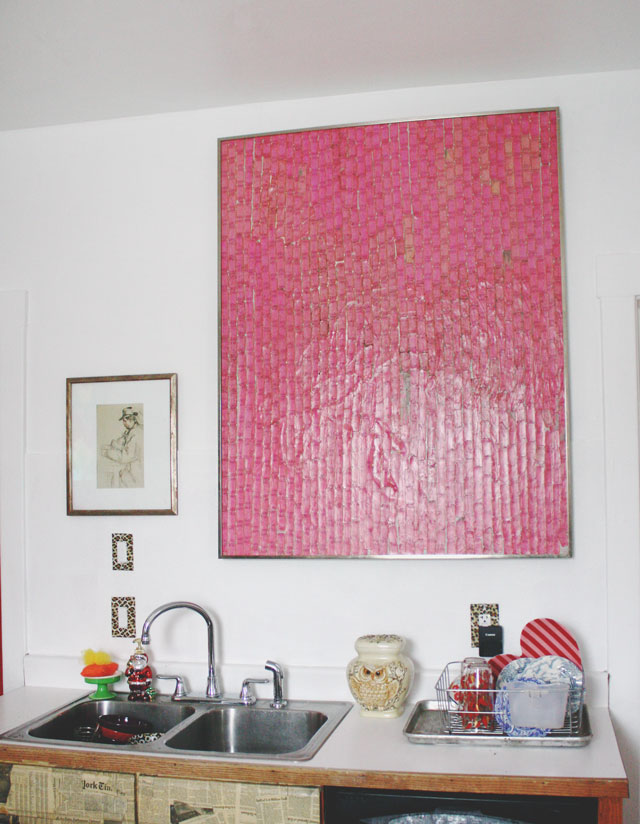 The glare from the window makes it look much shinier than it appears in real life, but you can see Big Pinky is just a blob of color and texture than livens the room without making you think too hard. You can also see that I have dishes in my sink and a Santa soap dispenser. Yes, it’s April. Listen, Yal, Santa keeps clean year round.
« Portrait of a Lady
On Fear, Foresight, and Fat Puppies »