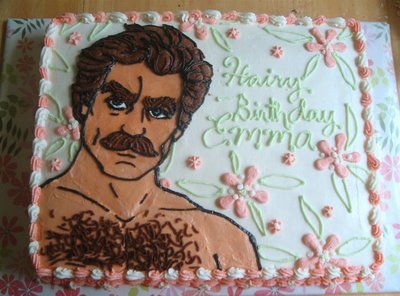 Well, I don’t know about you, but I could use a slice of Tom Selleck right about now.

This MOST AMAZING SLICE OF CHOCOLATE MUSTACHE cake is courtesy of  Alicia Policia, who  also created the fantabulous Muppet party I featured back in November. She made this cake TWO YEARS AGO and it irks me to think of all the time that went by without me knowing of its existence. How much cheerier would these years have been had known Tom Selleck cake was a life option?

And while I am not as handy with a frosting tube as Alicia, you can bet I will be attempting my own version soon. I feel Inigo Montoya deserves to be rendered in cake, don’t you? Or Elvis. Or Cher. Maybe Liza Minelli. Oh crap, she already has a cake.

When I was in college my friend Joe, a cold war history buff, was obsessed with Mikhail Gorbachev, former General Secretary of Russia. Random: do we say Russia or USSR? Now it’s Russia but when Gobachev was in charge it was the USSR. Anyway, you get the point–Joe was crazy for Gorbachev so we hired a bakery to airbrush Gobachev’s picture on a sheet cake and lit it up with seventy gillion candles and surprised Joe for his birthday. It was amazing until someone started arguing about who got to eat the birthmark and someone else yelled IT BELONGS TO MOTHER RUSSIA and it all ended badly with a bottle of vodka catching fire from a birthday candle. There’s probably some “for each according to their need” Marxist fable to be taken from the incident but that’s a little too deep for this blog post. Bottom line is you can’t be greedy with cake, especially communist cake, and double especially with Tom Selleck cake. His mustache belongs to all of us.