I like a big foofy floral centerpiece as much as anyone else, but there are occasions when the food needs to be the center of attention. Like Thanksgiving. Let’s face it: however beautiful, flowers look downright prissy when stacked next to a turkey carcass and Aunt JoAnna’s chess pie.

Just the same, I like a little bit of floral on the table. A little flowers, a little candles, a little bit of cloth napkins….suddenly everyone forgets who is winning the football game and is wondering what scrumptious bounty they are about to consume. Let’s give thanks! 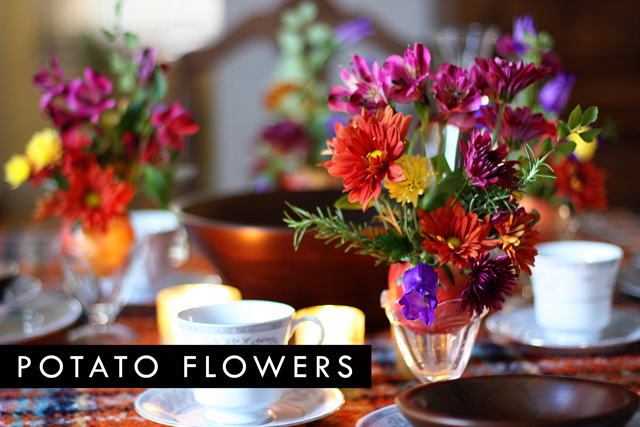 These are called potato flowers but the potato is not required. You could use apples, pears, eggplants, tomato, pumpkins, gourds….any sort of fruit or vegetable that is independently hefty and leaks a bit when you cut it.  Use a knife to make small, deep incisions and stick the flower stems in the potato as though it were a flower frog. The flowers will stay alive for hours (sometimes days) by drawing on the moisture in the potato.

Hearty flowers like mums, carnations, roses, dahlias and status, do particularity well. One time I did this with nothing but clementines and baby’s breath. It was a weird combo, but in mass quantity scattered around the table, it worked great.  You just need to remember that the more acidic the fruit and the more delicate the flower, the faster they will fall. Lucky for us, the hearty sort of flowers always seem to come bundled together at the grocery store for cheap. Or if you are like me, there are some mums sitting out on your front steps just waiting for a haircut. While I’m out there, I also grab some fresh rosemary — it adds a fragrance and evergreen-ish texture that is just perfect for Thanksgiving. 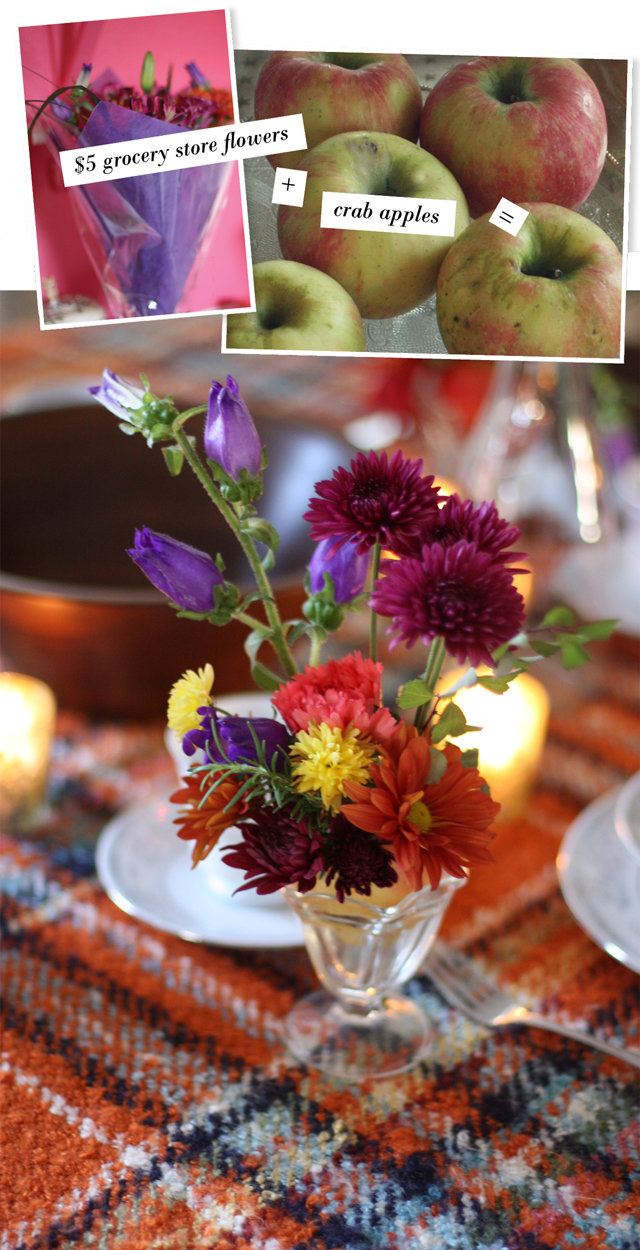 I learned this trick from my Mother’s friend Ramona, who learned it from her mother, who as legend has it, would make these arrangements for her bridge club using tiny red potatoes and flower cuttings from her garden. After the flowers were inserted she would wrap the bottom of the potato in a piece of ruffled bib lettuce and set it in an old-fashioned wide-mouth champagne glass. The arrangements would be clustered together on the buffet table at the start of the evening, then later when the ladies broke into groups to play bridge, the flowers would break apart and one small arrangement would be set at each table. Because they have such a small footprint, arrangements like this are especially nice for Thanksgiving (or bridge club) when you want to maximize every inch of real estate on the table.

Off topic: Why doesn’t  anyone play bridge anymore? I don’t even know how to play but I’d take it up in a heart beat if it came with finger sandwiches and miniature floral arrangements. 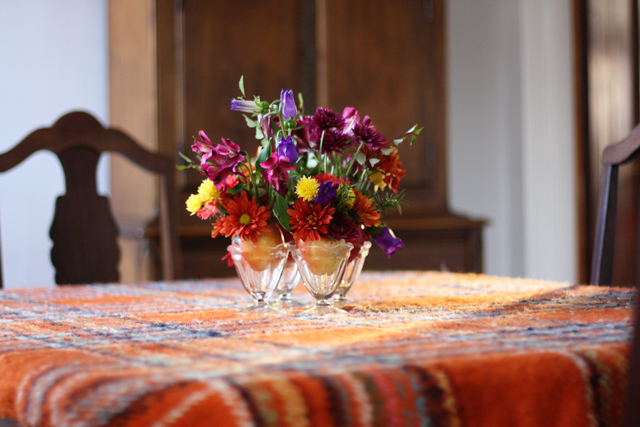 You like my plaid table cloth? It’s a blanket. Got it on sale at Target (don’t buy on line if you can help it — it’s cheaper at the store).  It’s super soft and washes beautifully. 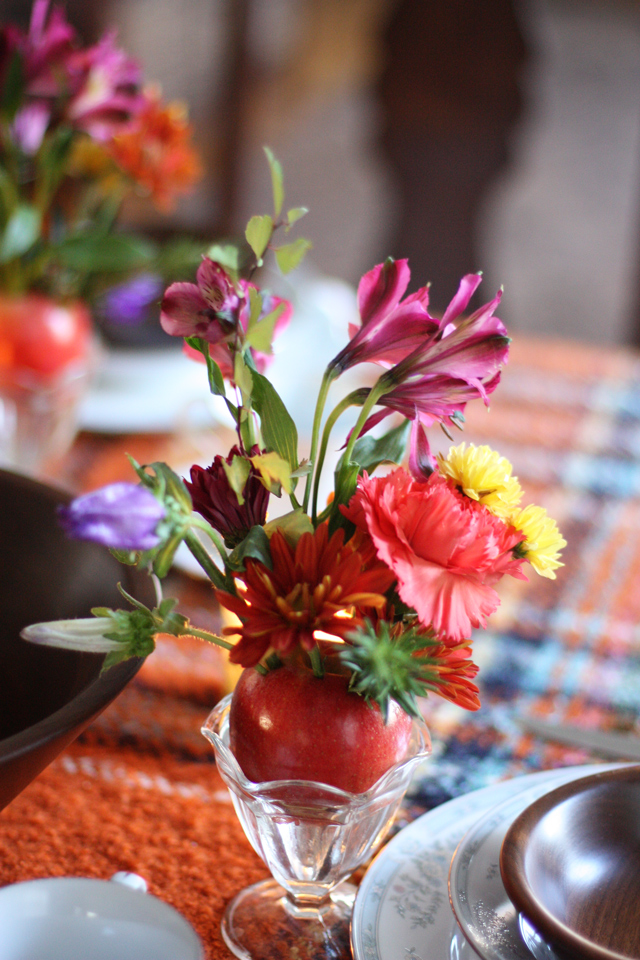 For the base, I used apples and old-fashioned sundae cups. I find sundae cups at thrift stores and garage sales for 20cents, sometimes less. I have no idea why anyone would get rid of them. I like them because they give a little bit of height, but they come in handy for all sorts of stuff around the kitchen, especially when it comes to entertaining. I should write a post on the many ways to use sundae cups. They are a seriously under appreciated! 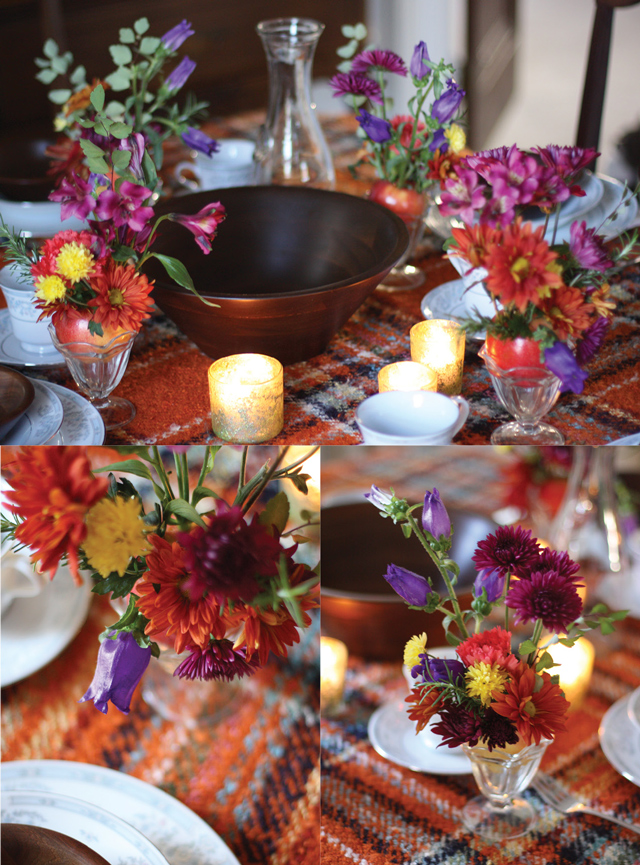 I like it when flowers are scattered around the table instead of one clump in the middle. If it’s a small group, you can set them so that everyone at the table has their own little posy. Or if that’s too much fuss, make one for every other table setting, or just one to place on either side of the main platter in the center of the table. 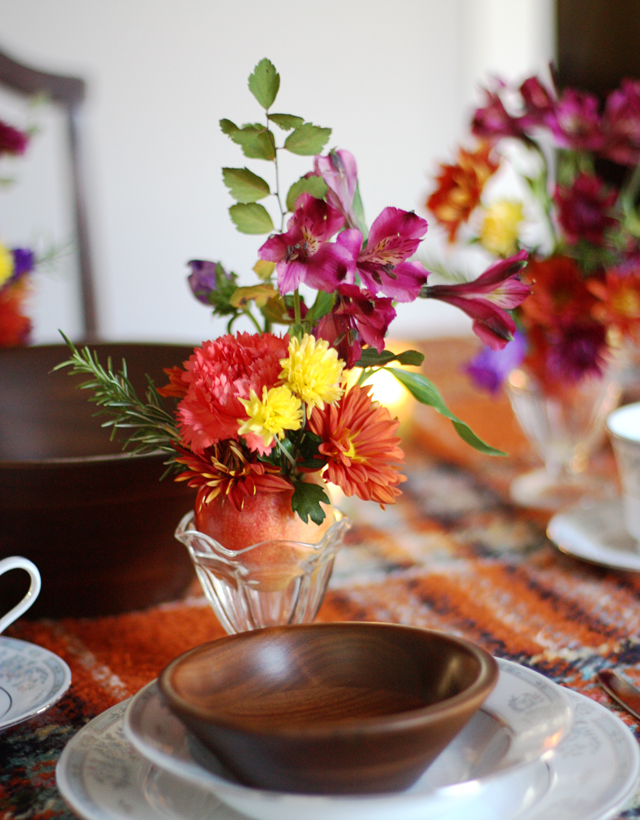 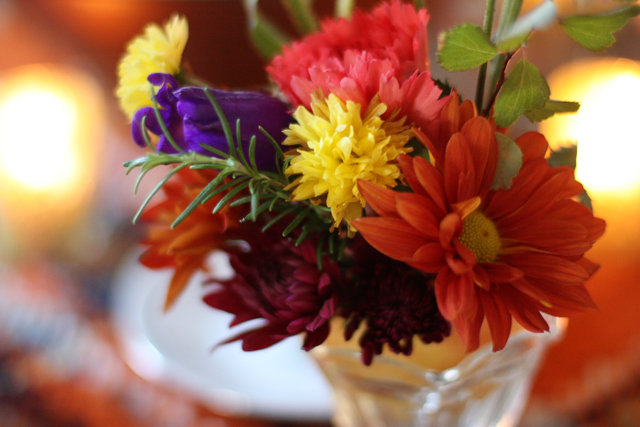