I am feeling extra happy today. For not only did I cross a bunch of finish lines, I went two whole mothertruckin’ weeks on nothing but salads and omelets and green things I don’t even want to talk about because they sound like something you have to treat with special shampoo from the pharmacist. No sugar. No carbs. No booze. Not even a cracker or a diet soda. -People who know me in real life just read that sentence and gasped. I know! Folks, we’re going deep.

And, not only is today my cheat day, today kicks off St. Patrick’s day weekend in Chicago. Not only do we go crazy, we DYE THE RIVER GREEN!

It’s a big deal around here. Weird fact about me: my grandfather was Chicago’s fireboat captain for many years and so when I was but a tiny tatertot, I actually got to ride ON THE BOAT chugging up the river tossing out the dye. For real. Want to know a secret? The dye isn’t green, it’s orange. But actually looks like radioactive neon yellow powder. Now the dyeing is done by fancy speed boats in a parade, but there was a time when it was just a bunch of kids on a tug boat, eating jellybeans and feeling cool. When I tell that to Chicago people they either don’t believe me, or they look at me like I’m Miss America and nobody bothered to tell them. I know. I’m special like that.

Speaking of special, my refrigerator is in yet another magazine!

I think this is the fourth it’s been featured in print? Fifth time? I’m telling you, this fridge is like the Naomi Campbell of appliances.

You can get the details on how I wallpapered the fridge with help from Chasing paper here, or pick up a copy of this month’s HGTV magazine. You’ll see all sorts of awesome ideas from other nifty blogging friends as well.

So that is what I will be doing this weekend; HGTV magazine, a green glitter leprechaun hat, and a six pack of Reece’s peanut butter eggs. WHAT A TIME TO BE ALIVE!

It’s the first full week of October and I am feeling the autumnal high that can only come from a weekend of basking warmth of a new batch of scented candles. Folks: It does not get more exciting than this. No. Really. This is like how your spouse/sibling/BFF spends alllllllllllll year waiting for their fantasy football draft day, and you are like UHHHH WHY IS THAT EXCITING? And they are like UHHHH I DON’T KNOW BUT I WAITED ALL YEAR FOR THIS SO LET ME HAVE MY JOY.

Yeah. The joy of candle season is very real in my house. I mean, scented candles are a fun habit all year long but the pickings get slim in summer if you don’t do floral, and even though the good stuff hits stores in August, it’s not that fun to light candles until the first time the furnace comes on for the year. That’s the law. Welp. As of this weekend, the heat turned on, the candles came out, AND, get this: I am currently typing this in my studio by the light of a fireplace. I know. It’s like all kinds of crackle-me-up-cozy and I am like one peanut butter brownie short of ecstasy.

Good thing I have the peanut butter brownie thing covered.

Also. If you too are a candle crazed lunatic, you might want to check out two things; 1. My tutorial on how to remove candle wax from reusable glass containers (would you believe it is my all-time most popular post?) and 2. This lady. She will make you feel way less crazy about your candle obsession. Yes, I know! You’re welcome.

This wreath made from needlepoints is 100 kinds of rad. Sweet Paul is rocking it once again!

There is a such a thing as a responsible gun owner; this is not it.

The male beauty contest of the Sahara dessert.

I need these sunglasses. Now.

Why are Japanese kids so independent? And more interesting point of discussion; why have so many parents around here given up on valuing independence in their kids? And what does that say about all of us in general? Hmmm…

And speaking of Japanese kids…look at this majorly rad and nameless way to teach them about color.

The wedding dress that would not quit.

Have you been following Humans of New York refugee stories? Oh my God. Just…yeah. You need to do that. We all do.

Even Blake Lively has a hard time operating a lifestyle blog. This makes me feel real accomplished. Thank, Blake.

Five ways to make/revive wall art on the cheap.

ZANDRA RHODE’S HOUSE! You need to see it:

I don’t know about you, but I am coming off a seriously lovely holiday weekend. I know it was America’s birthday party, but it felt very much like mine. There was an unapologetic sum of eating, chilling, and being generally lazy in good company. I have seen more parades, grilled meat and small dogs in costume than any one person is allowed. Yesterday was gorgeous, so we spent it up at the Chicago Botanic Garden, which is lovely any time of year, but especially when the waterlilies are in bloom and the whole place is like walking around in a giant Monet painting.

Also. This was interesting!

Well. Gosh. It swallows a beetle, then changes gender, and births up the beetle all that in one day? This makes me feel really under accomplished!

The mathematical principal reveals how to get what you want in life. (In short: The one who fears rejection the least will end up with the most – but it doesn’t say anything about victoria waterlilies).

I am OBSESSED with these treehouse tents.

The girl scouts turned down a $100,000 donation because the donor was a dirtbag. Then they made three times that anyway. Way to enterprise, ladies!

Whoa: 270 Reasons women choose to not have children.

Photographs of where children play around the world.

The state of Ohio’s health director, whose refusal to list a gay man as the surviving spouse on a death certificate (which led to last week’s landmark U.S. Supreme Court ruling) delivered the reading at a same-sex wedding last weekend. (fyi, it was from Mark 12 “Love your neighbor as yourself. No other commandment is greater than these.”) (And if that isn’t full circle living, I don’t know what is.)

Eight drag queen makeup hacks that will change the way you put on your face.

Do you end up with a pile of sea shells at the end of the summer? Here are ten nifty things you can do with them.

Holiday of the week: Different Colored Eyes Day. This holiday celebrates the diversity of eye color, as well as heterochromia – the eye condition where people have two different colors of eyes (now brown, one blue, etc). Do you know who almost has ? Jane Seymour, aka Doctor Quinn Medicine Woman. Also a lot of other celebrities, including David Bowie, but not really. Because David Bowie wasn’t cool enough already? Sigh.

Word of the week: XinTeng. The Chinese term for heartache with a particular emphasis on shared pain, or the heartache that comes from witnessing a loved one in pain. In America we just call this “feeling sorry for someone” but this is more empathetic. Why do we not have this word in English?

And. Don’t watch this if you are hungry.

I call dibs on the blonde.

Happy Friday everybody! Apologies for the radio silence over here. A screaming case of hip bursitis landed me bed bound for a few days. I know. Does that sound like fun?

Thanks to doctors who make house calls, four separate injections of steroids into my hip joint, and a steady stream of Judy Garland size servings of muscle relaxers…I am on the road to recovery. Praise God! I’m still not quite “with it” enough to drive or operate machinery or even read a proper book, but I figure I can sputter out a blog post to share the greatest news ever: the Iris Apfel movie. It is here!

I’ll be chilling out in bed with Netflix for a couple more days (viewing recommendations welcome). I’ll see you guys next week! 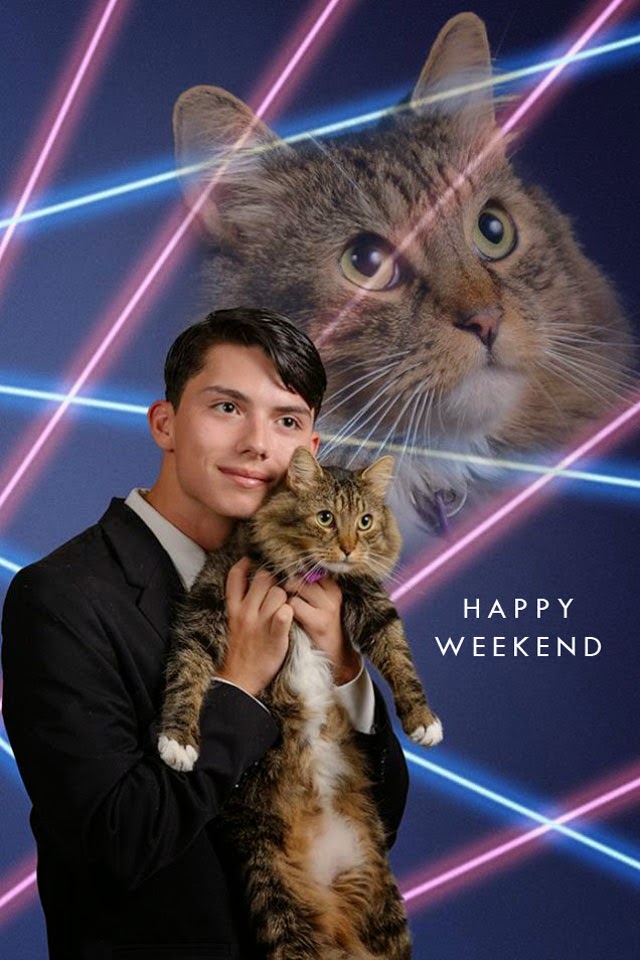 Under the headline of Critically Important News…

This teenage boy just wants his yearbook photo to include this professional photo of him and his cat, Mr. Bigglesworth, and lasers, and he’s getting flack. Unbelievable. Wtf. FREEDOM DOESN’T STOP AT CAT LASERS, AMURICA.

My favorite new song just hit #1. Why this is awesome and what it says about where we are going.

My to-do list this week included “make a crockpot chocolate zucchini cake for queen latifah.” I know. Tough life, right? And just wait. This is what it looked like… 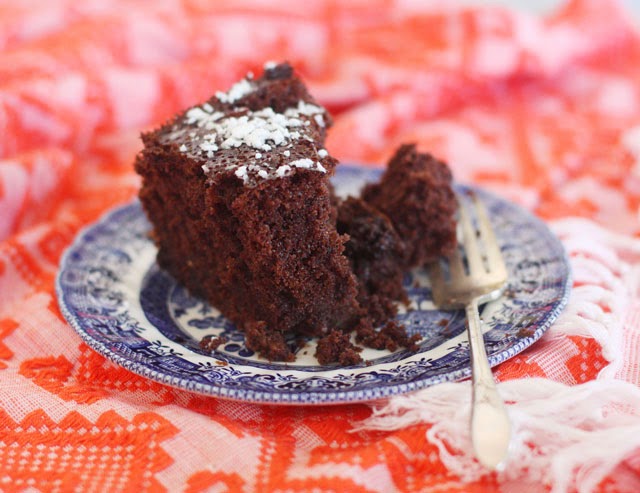 Yeah. You’re gonna want the recipe on this one.

It’s been a busy week for me, although you would not know it by my lack of posts…

Some exciting blog developments on front side (you’ll see those soon), and some not so exciting developments on the backside (like nearly losing my domain, ripping my hair out, a little crying, and extensive time on the phone w sketchy Eastern European men. It’s all good now, but word to the wise, do not set your domain to auto-renew on credit card without noting the expiration date). Throw in a couple of emergency trips to the vet with Lola (all good too) and wrapping up my day job (getting good soon), and I’m excited for the weekend. 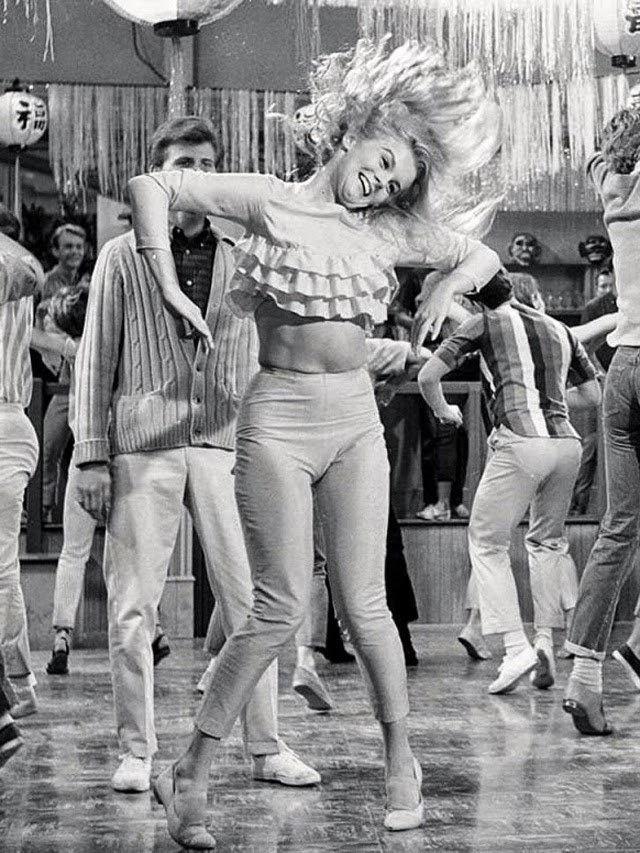 I’ll tell you something: Nobody does ruffled crop tops like Ann-Margret in Bye Bye Birdie. Nobody.

It’s Memorial Day weekend here in the US, which serves as the unofficial launch of the summer season. The whole dang country will be smelling of barbeque, buttered corn, and freshly washed porch furniture. I myself intend on eating chocolate covered potato chips because 1. They are good, and 2. They are patriotic (because if crispy/salty goodness dipped in chocolaty/creamy goodness isn’t a symbol of the best America has to offer, I don’t know what is). 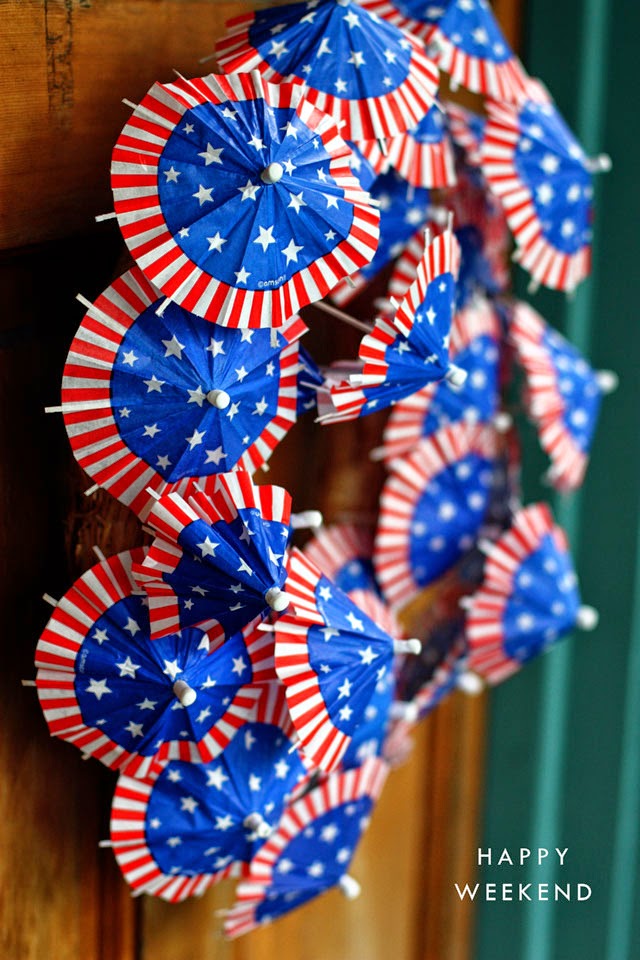 And there is still time to make your own cocktail wreath. Woot!

It’s been a good long while since I have looked forward to a weekend so much as I am looking forward to this one. Once again, Friday is my second favorite F word. 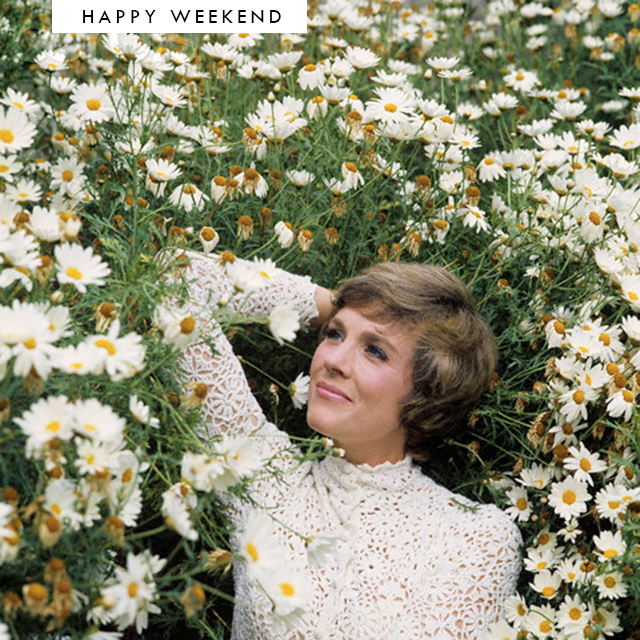 In other news, I found a video clip of Julie Andrews yodeling with Maria Von Trapp. The real Maria. Two Marias. One stage. Endless vocal clicking. And not a lick of that devil trash Carrie Underwood to be seen or heard (sorry Carr, you tried).

Take it away Marias!

The most wonderful thing happened this morning – I walked out the door and it wasn’t cold. Was. Not. Cold. It was chilly enough to warrant a coat, but I didn’t even zip it up or anything. If that is not a harbinger of spring, I don’t know what is! 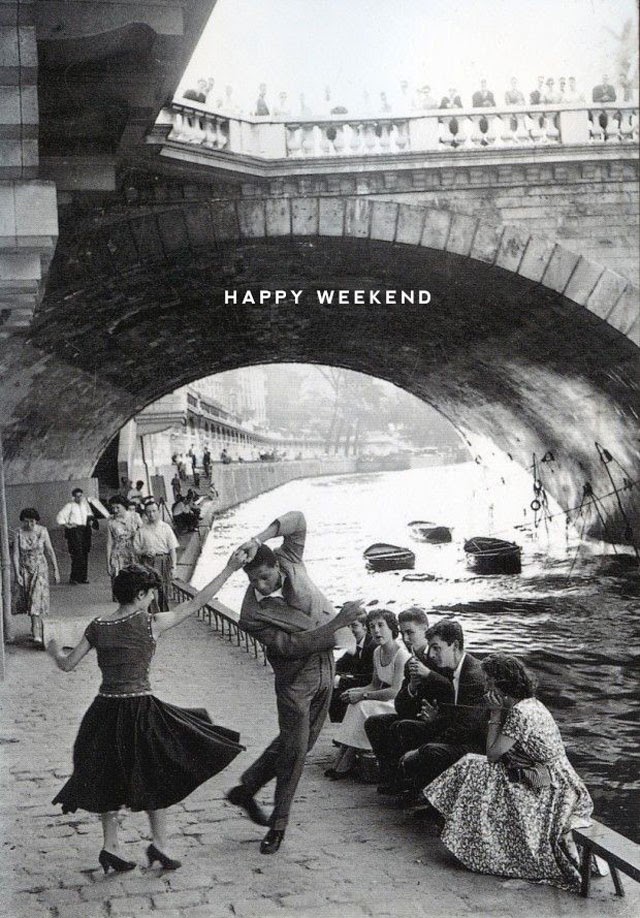 It’s a big weekend around here as tomorrow is the day Chicago dyes the river green. It’s a thing. It’s also a lot of bagpipes and green beer vomit so I’ll be huddled at home up north (but I’ll be wearing green rhinestones in solidarity!)

An old post I wrote about the random symbols associated with St. Patrick’s Day (hint: it ain’t all leprechauns).

Work has been busy. Like real busy. And when it’s not busy, I look up and find window washers making vulgar hand gestures and singing Puerto Rican folks songs. 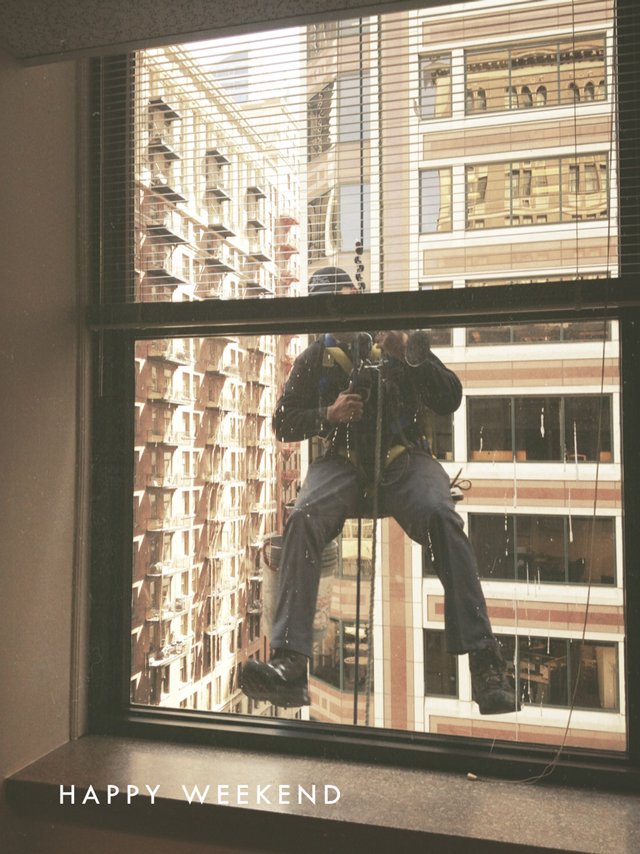 Speaking of offices, I missed The Office finale last night. Was it good? A friend texted me that there was a wedding with cats in attendance. AGHH! I need to see this!