Listening – For a long time there I loved Pandora, then she was replaced by her step brother, Spotify, but now Spotify is dead to me and I am loving his much-cooler cousin, Songza, an online collective of curated song lists. And yup, it’s free. On your computer or as a phone ap. What’s different from the others? Instead of searching by an artist name or genre, you pick out a mood and Songza plays you a soundtrack. Even better: they don’t use algorithms, they use real people with great taste in music. This is like that year in your 20s when you had that friend who made really good mix tapes but then they moved to Ohio and you went back to listening to Gloria Estefan. Listen, that was NOT okay. Well, your friend just moved back in town and they are making mix tapes for all occasions! Some of current favorites of mine; Vintage Soul Dance Party, Dancing Queens of the 70s, Cool and Canadian, Classic Biker Bar Rock, Andy Warhol’s Record Collection, Whip Smart Women of the 90s, Peggy Olseon’s Bohemian Awakening (just search “Mad Men” for all kinds of fantastic treasures). Songza is going to change your life. You’re welcome.

Reading – All the Light We Cannot See, a historical novel set in WW2 Europe, and I’ll admit, is not exactly my genre. I’m not big on long novels, especially long novels with Hitler, but you know what? It sucked me in. The writing is good. The descriptive qualities are superb, which I cannot help but attribute to the author empathizing with one of his characters – a blind girl. A French blind girl. This book is like one of those recipes I read on paper and think “Yeah, no thanks.” but then I put it in my mouth and think “Oh hell, yes!” It’s a good one.

Loving – I’m loving the idea of highly decorative envelopes peppered with vintage stamps and stuffed with simple stationary. Wouldn’t that be a fun addition to your mailbox? Especially with the annual Valentine Swap coming up (stay tuned for something next week) I have mail on the brain!

Wearing – These pants. Holy cats, Y’all. These black fleece pants are a game changer. They were a Christmas gift and all my other pants are getting jealous because these babies have been on constant rotation ever since. These pants look like regular black yoga pants but they are the warmest, snuggliest, amazing pants in the history of Pants Town USA. They are not cheap, but Eddie Bauer has some good sales so hang in there. Prepare yourself! Everybody knows fleece is warm, but it also gets staticy and picks up hair and stops feeling soft after a couple round in the wash, right? Yeah, no, these pants don’t do that. Water and snow and stuff just roll off. Indoor, outdoor, or under other pants as long-undrewear, I’m telling you, these pants.

Watching – I’m over-the-moon-and-back thrilled that Transparent was a winner at Golden Globes because that will mean more people will watch it and then I will have more people to discuss this show with me. Yes, because I’m selfish like that. Transparent is complicated and weird and confrontational and sometimes it made me really, really uncomfortable. But isn’t that the hallmark of good TV?  When it makes you uncomfortable but you still want to know what happens next? I like to think so. It’s is the story of a fractured family, each member more compellingly flawed than the next, and oh yeah – the dad decided at 60something that he wants to live as a woman. He is a trans parent. Get it? That said, and given the title, the show is not about a man’s transition to another gender; it’s about a series of conversations between interesting people with complicated histories and the issue of gender is just one of the characters. It’s on Amazon Prime, which is new to me, but they have some great stuff on there (Alpha House’s newest fan here!). I got rid of cable last summer but I’m finding tons of treasures on Netflix, Hulu and Amazon (and saving lots of money too). Winter is long, though – so you have any reccomendations, I’m all ears. Homegirl loves her TV time.

Normally I try to do a short format “Things and Doings” mid-month, every month, but I am behind on so much these days and it’s been a while since we caught up, so how about a tumble through the house and see what is going on. K? K! 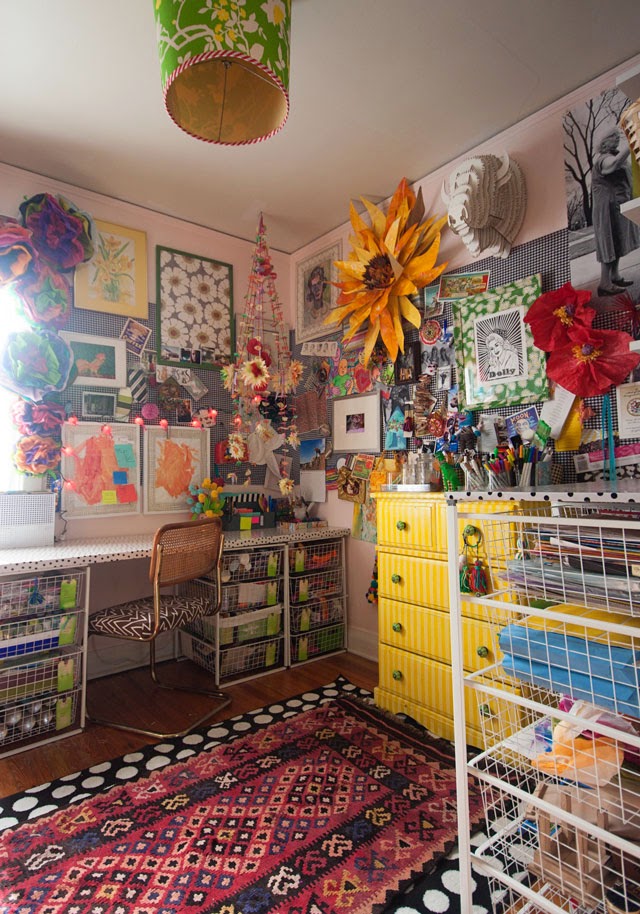 Doing
To the best of my knowledge, Hell has not frozen over, and yet, I cleaned my studio space. Where? What? How can this be?

FYI, if you ever wondered, this is normally where my arts and crafts supplies work on their fitness. You will rarely see it is it tends to get messy with computers and paper and stuff that doesn’t play well with glitter. 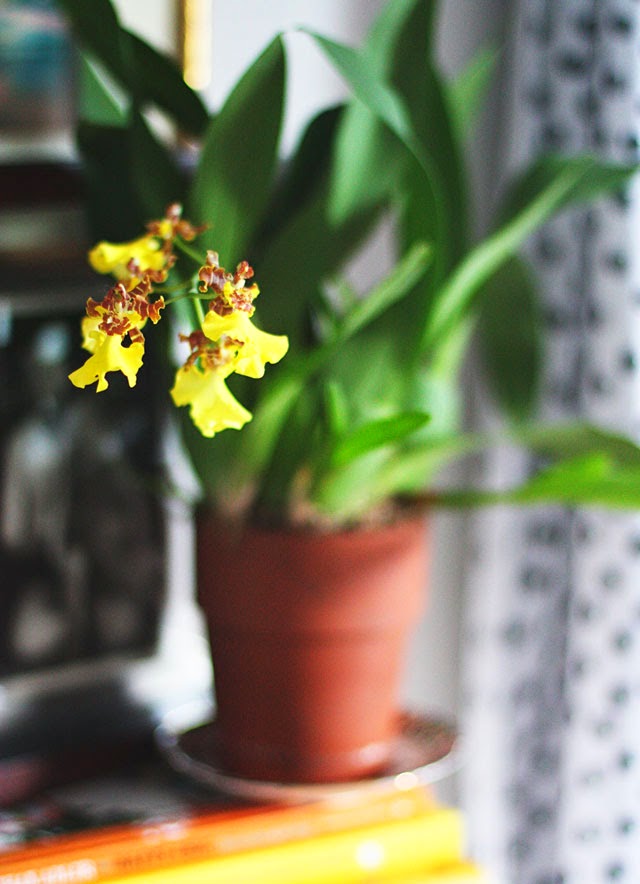 Growing
This will excite no one but me but Imma say it anyway: I got an orchid to bloom a second time. People! I bought the thing for a photoshoot in March, let it die, ignored it for four months, then watered it again. Bam. Orchids! Even expert gardeners have a hard time getting orchids to bloom without a greenhouse, and here I go, a woman with a 30 year history of plant slaughter, making it happen on the first try. Don’t act like you are not impressed. Don’t even. 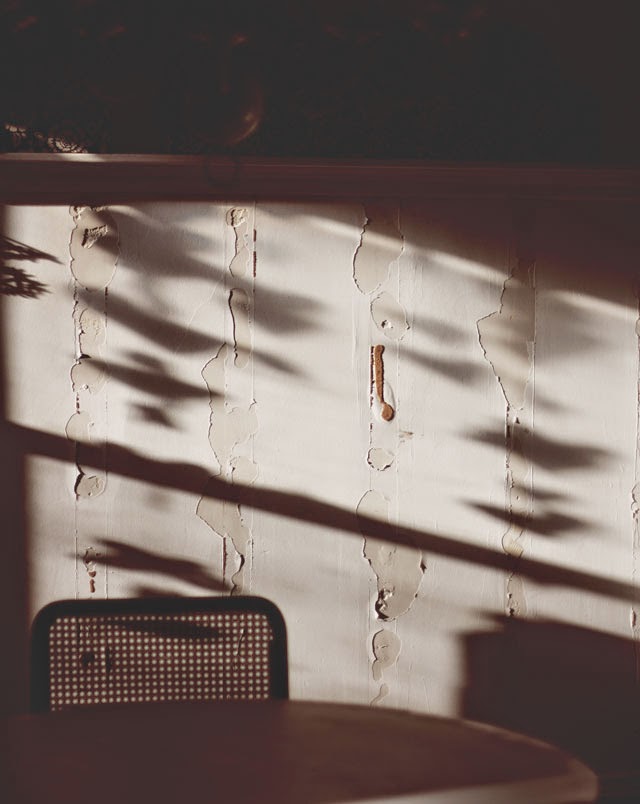 Making
I’m a making a mess. For over a month now, I have been attempting to remove my board and batten paneling in the dining room. It was a nice trend, but that is the nature of trends, no? We get over them. Demo sounded like an easy thing, and I got so far as the boards, but not so much the battens. Color me frustrated. Now, I like to think of myself as handy, but this simple plate rail requires more than two hands and perhaps a power tool or two past my comfort level. And while it kills me to admit I need help around the house, it excites me to learn something new. Stay tuned. 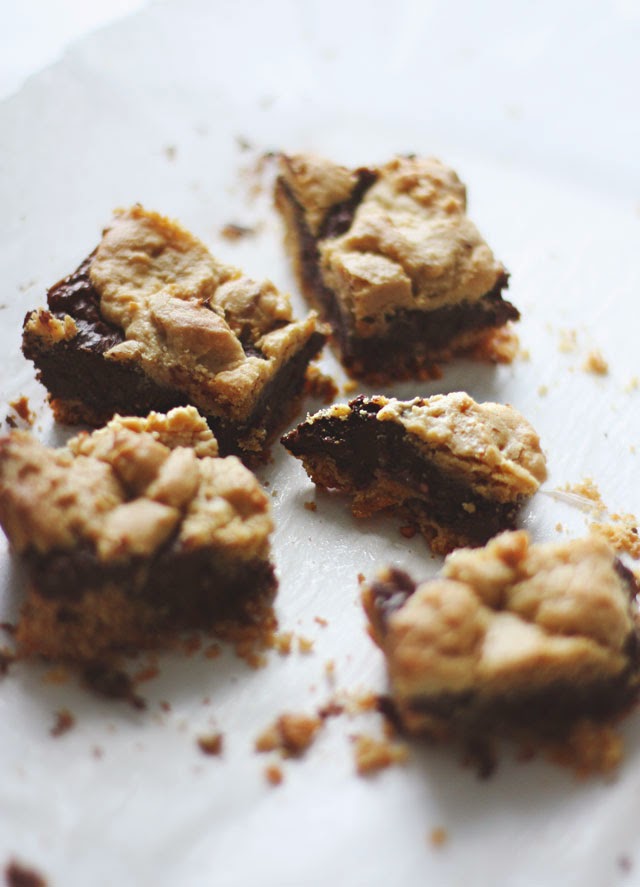 Munching
I made a batch of Hold Me Down Debbie Bars. I’m not saying their are “to die for” but I might “lose a knuckle or two for” if you know what I mean. 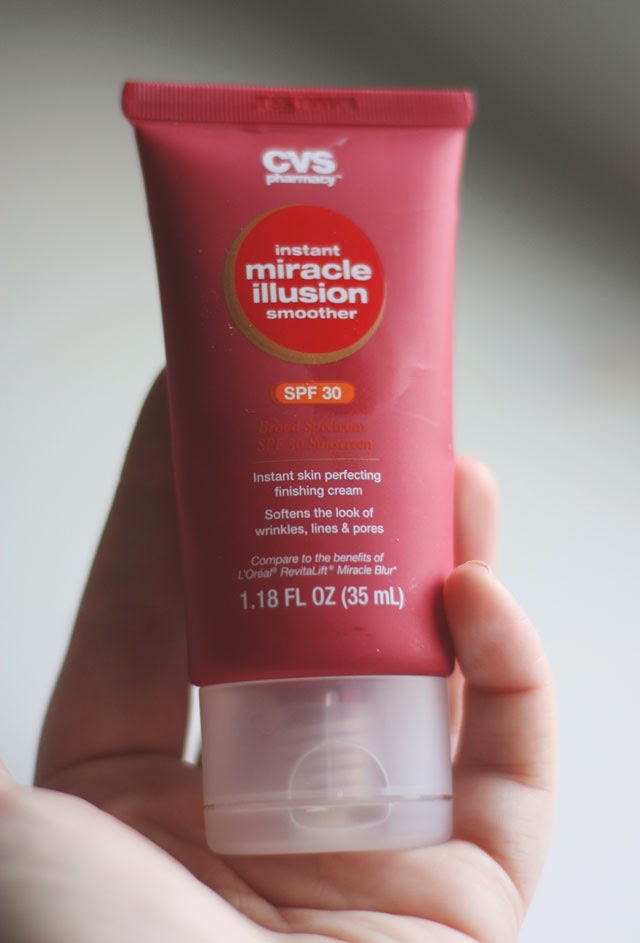 Wearing
Y’all. This is exciting as soup but I’ll talk about it anyway: This off-brand CVS moisturizer is my jam.
For real. I’m freaking out about this wonder good. I bought it because it was on sale and I had some CVS bonus bucks or something to spend and I’m always looking for a decent moisturizer with an SPF above 20 (hard to find!)…so I went into this with low expectations, but holy sh*t. This is rocking my world. It’s light enough to never get greasy, but substantial enough that I feel it sink in and go to work. There is a mild “smoothing” effect that is perfect (for me). I’m at a stage in my skincare where I’m not looking to repave the sidewalk, but if we could make it look like it’s just had a good power washing, without all the work, I’m in. This is it. And it was like ten bucks. Who knew? 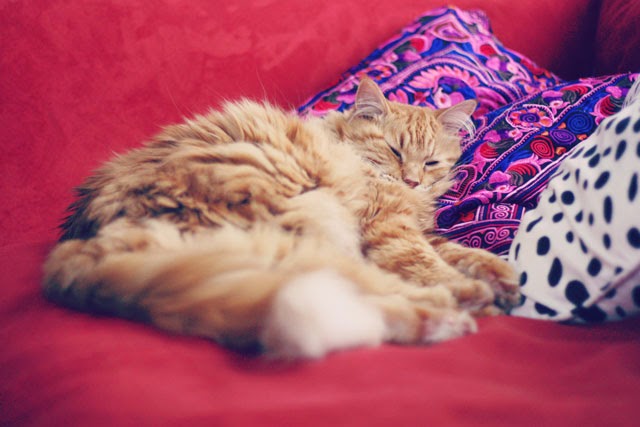 Worrying
Lola has been fighting off an infection for over a month. Initially it looked like a passing UTI, but the antibiotics only addressed the symptoms and two weeks later I had to rush her to the vet when she was flopping over, unable to eat or drink. To see a cat so vital and lively collapse into helplessness in a matter of hours, literally hours, is terrifying. Her doctor thinks she must have been masking her symptoms, which is typical for cats (they don’t like to show weakness — especially former feral cats like Lola). After a couple rounds of blood work, an IV and some shots, she is in much better spirits, but not yet 100% just yet. Fingers crossed (toes and paws too) this latest round will get the job done. If you are an animal lover, you know how hard it is to know they are in pain but can’t tell you where it hurts. I can’t even imagine how people go through this with human babies and stuff. I can’t. 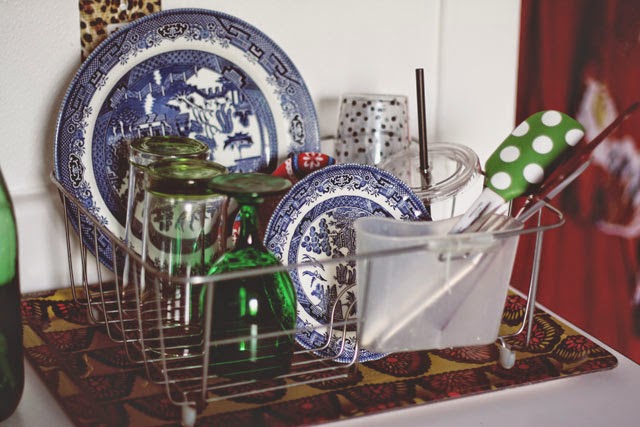 Learning
New goal: To not go to bed unless the kitchen sink is empty. When you live alone you don’t use that many dishes on a daily basis and it’s surprisingly easy to let them pile up. I have been letting my housekeeping slide quite a bit lately, and that’s a larger issue, but I figured that if I force myself to at least empty the sink, and to not let it build until there is a full dishwasher load, I’m half-way to tidy. Is the kitchen clean per say? No. But it’s never so bad that I have to schedule time to clean it. And that feels pretty darn good right now.

Bonus realization: when you only buy dishes you love in patterns you like, the dish rack is kinda cool looking. Win! 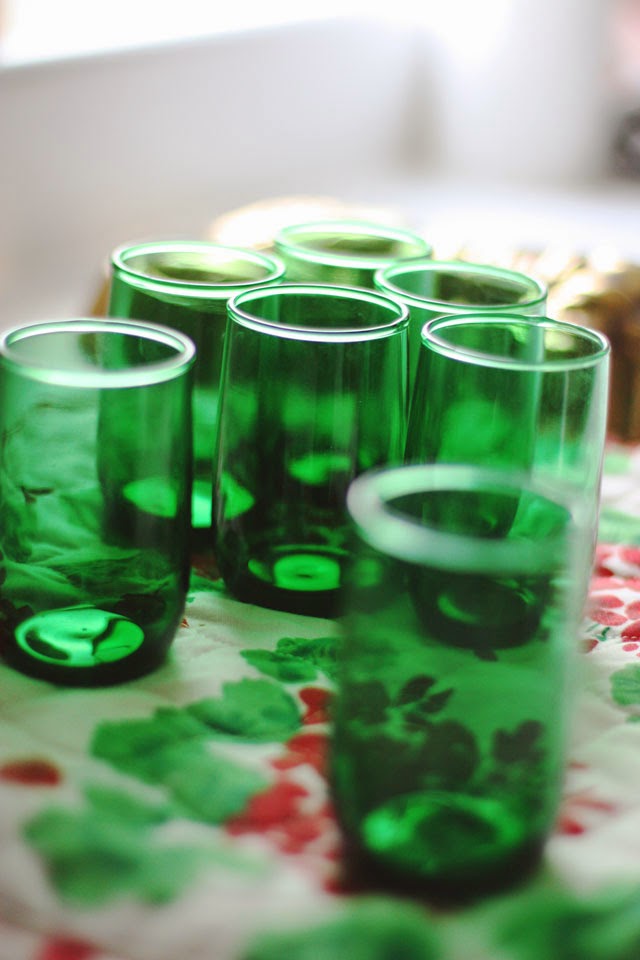 The summer is usually my heavy time for thrifting but I’m way behind this year (hoping to make up for lost time at the Kane County flea market next weekend – toot toot!), still, I lucked out finding a set of arbor green juice glasses, 49 cents a piece at Goodwill. This almost, ALMOST, makes up for that time a hose beat stole my glasses in a thrift store and I nearly had to throw down. After seeing the beauties in all their emerald glory, you can imagine why! 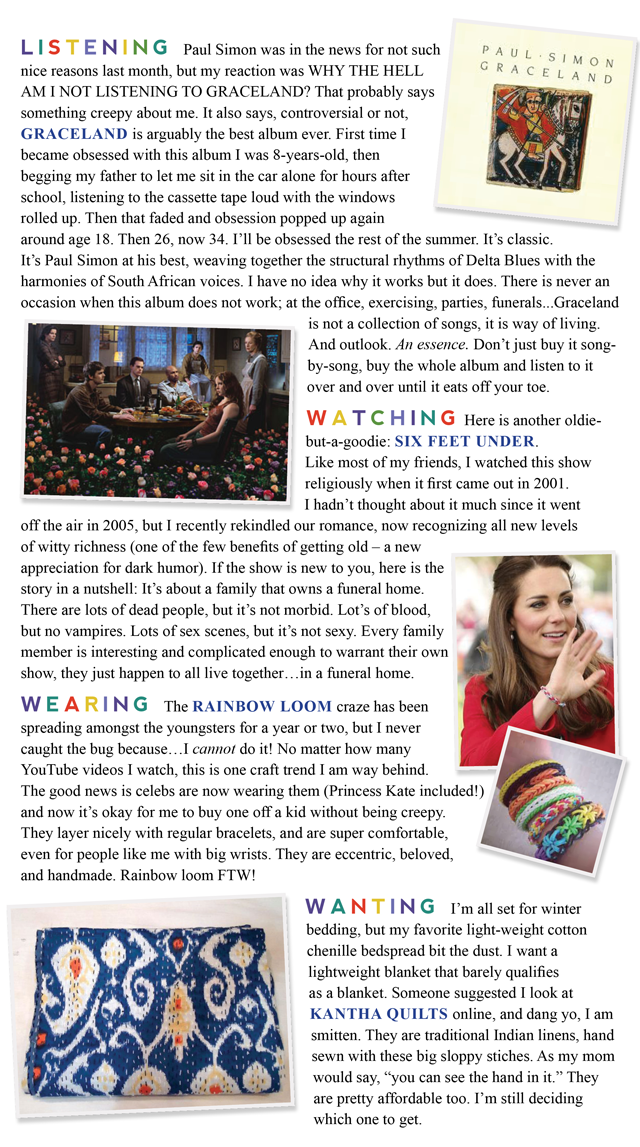 Some of my favorite things from the month of May. If you want to share in the fun, click the source links below. 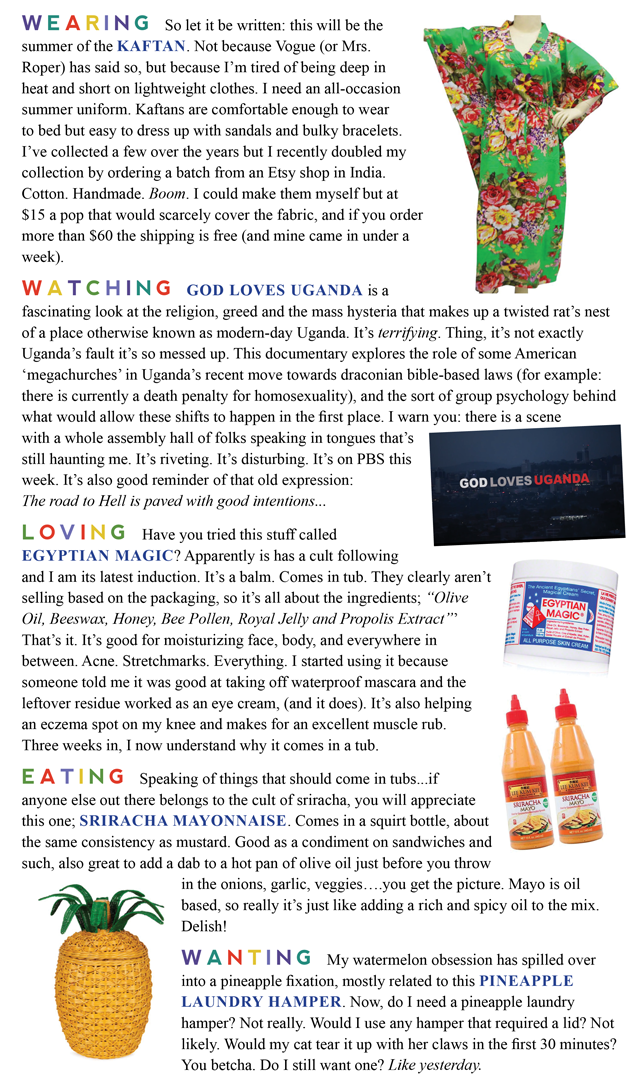 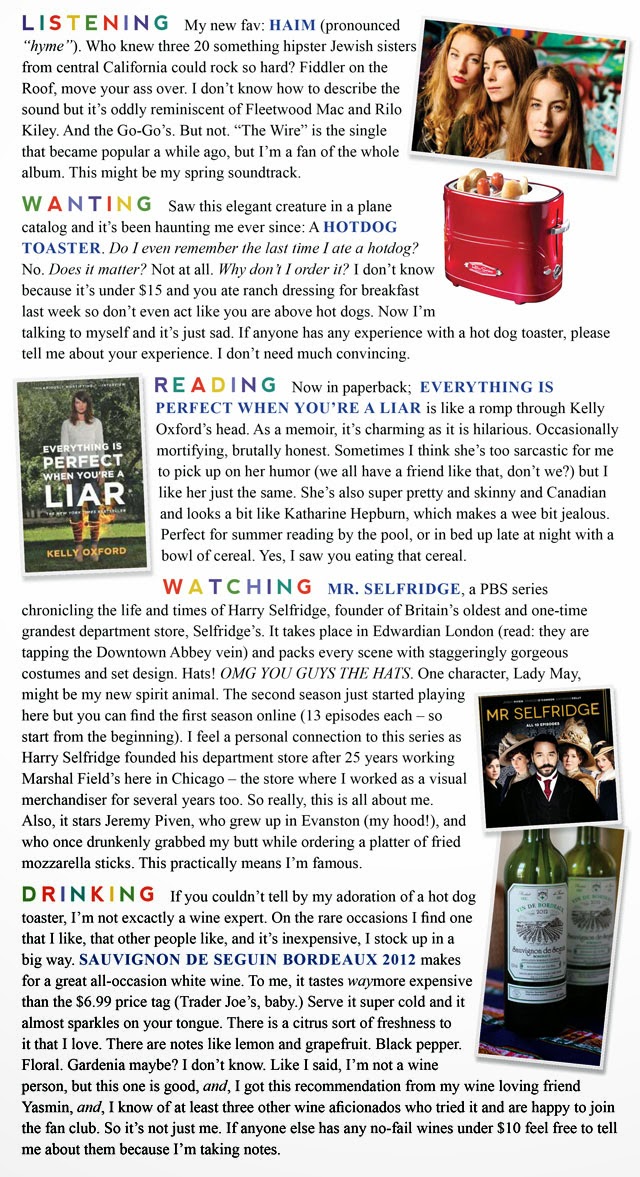 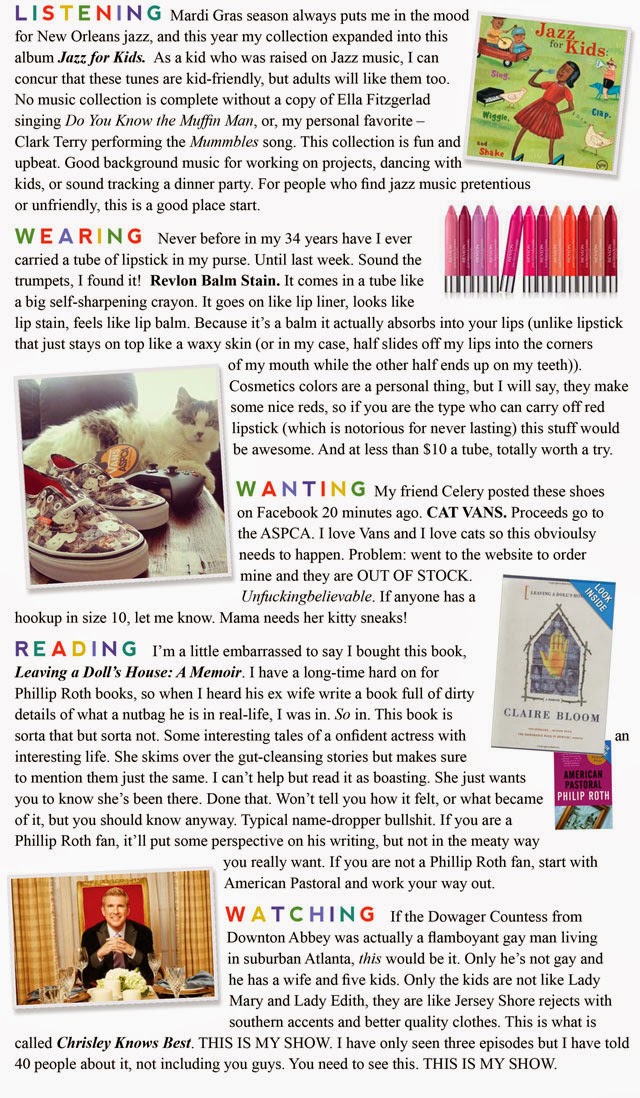 Summer Heights High now on HBO (but google around, you’ll find it lots of places) | Skinny Cords (plus and maternity) | Answer Me This Podcast | Daily Rituals by Mason Currey | Green Tea Kettle 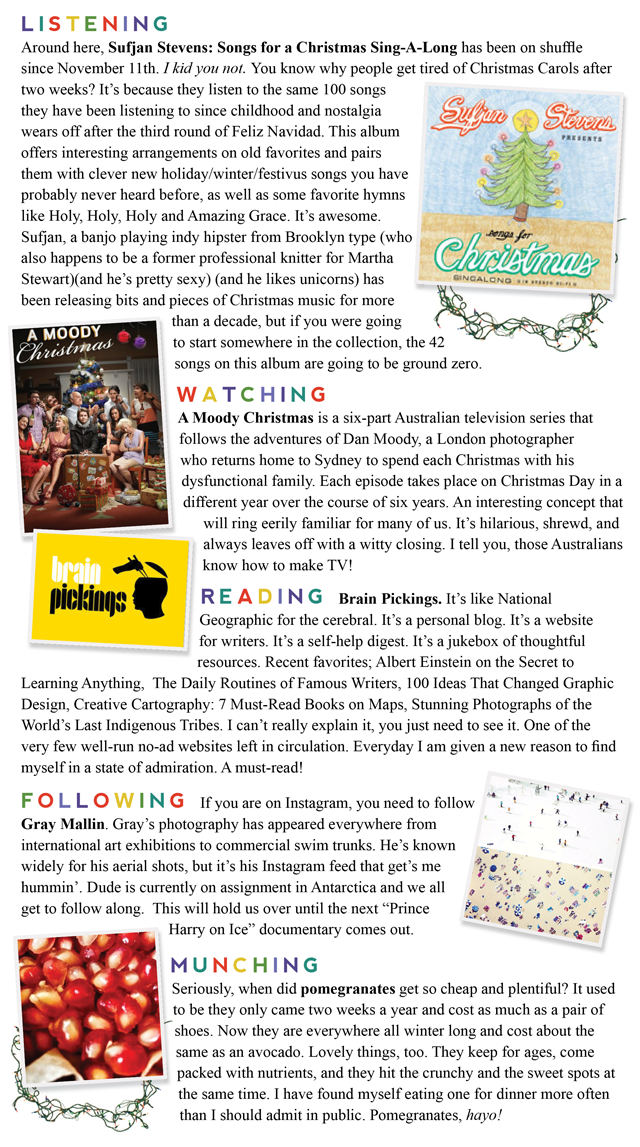 LINKS: Sufjan Steven’s Christmas Sing-a-Long | The First Episode of A Moody Christmas | Brain Pickings | Gray Mallin on Instagram | How to de-seed a pomegranate like a boss

Is it even necessary to discus favorite things in the month of October? Is not everything in a October worthy of favor?

Welp. At the risk of being redundant, her are a few recent highlights… 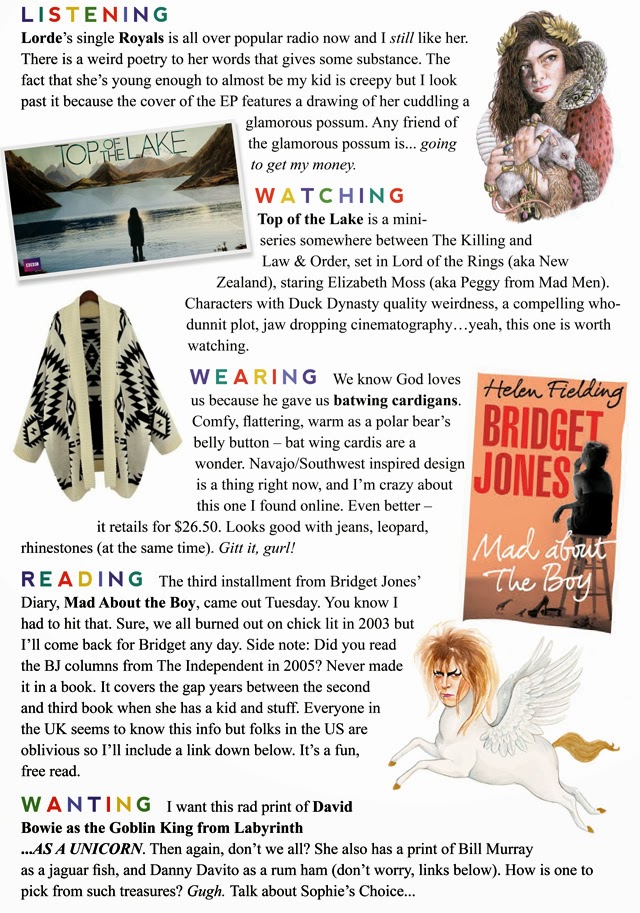 How about you –read a good book? Seen a great movie? Bargain coupon worth sharing? Tell me about it in the comments. I’m all ears.