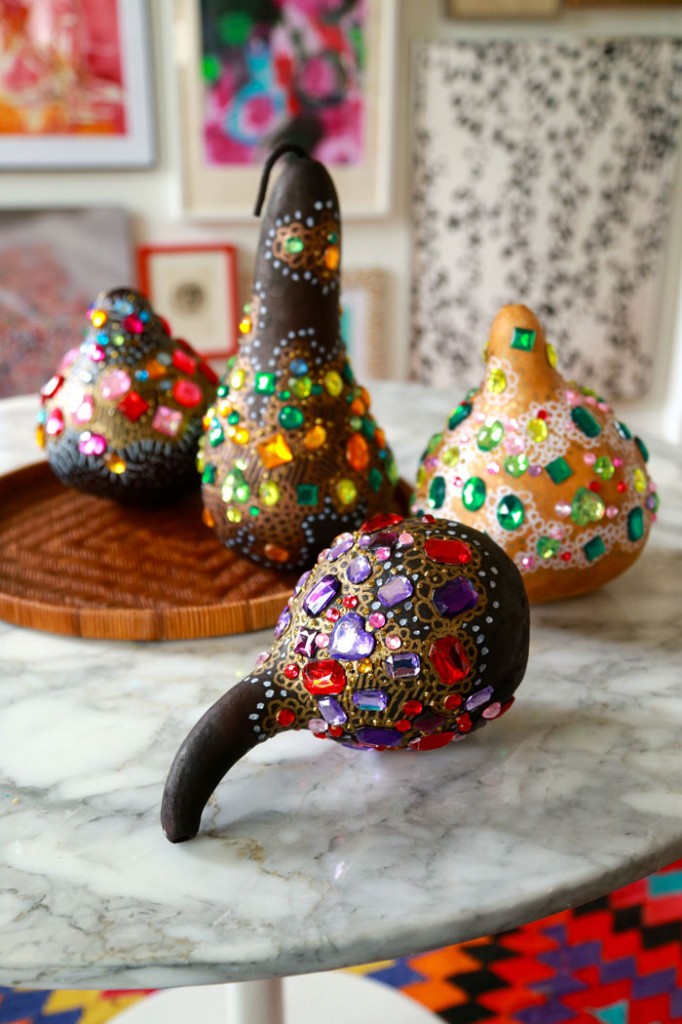 Now is as good of a time as any to tell you that I watch ice dancers on youtube late at night and sometimes I get really angry that they are not wearing enough bling. I mean, the hell? If you can’t count on ice-effing-dancers to hold down the sequin quota, who can you count on? Nobody. That’s who. It used to be the Russian contingency could always be counted on to festoon themselves in sparkles (that’s what 80 years of communism will do to a nation) but now they have all gone tasteful too. I blame Vera Wang.

Anyway. Now that the weather is cooler and it’ll be another three winters ‘til I get a decent round of icecapades, I turn my eyes to the humble bounties of the Midwest: gourds.

Here in Illinois, gourds are easy to find. Just about anywhere that sells pumpkins will sell some sort of gooseneck gourd situation. Home Depot sells small ones for a buck, and big ones for $10. Important side note: my local Home Depot also keeps a shelter cat in their greenhouse named Xena The Warrior Princess, so you know they are good people. So that’s why I buy my gourds from them. Last year I spray painted a bunch of them gold, then I let them set out in a box on my sun porch all winter thinking they would dry out and by this fall the gourds would be nice and dry. But you know what happened? One of the gourds went rotten and instead of drying it just melted over the other gourds and one day I opened the box and was like a car accident. A big, moldy, wet fart smelling car accident. So. That’s my way of saying I do not suggest you dry your own gourds. Unless you have a nice cool/dark place you can dry them without touching each other. But that’s not me. Where was I? Oh yeah, gourds.

If you have the patience to dry your own gourds for decorating next year, by all means, be an over achiever like that. I found mine on clearance at Crate & Barrel for $3 (another advantage to living in Illinois: the Crate & Barrel Factory Outlet) but you can also buy them online from farmers like this guy.

If you wanted to make these I’m guessing you pretty much know what you’ll need.

*Note on rhinestones. There are a lot of things in life I know very little about, but cheap rhinestone isn’t one of them. If you are looking to buy/use/hoard acrylic gems, the best bargain is this one pound bag from Michael’s online, courtesy of Darice. My local store sells some smaller grab bags of crystal-rhinestone-thingies, and they are great, but if you want some bang for your buck, this is it. It comes in a giant jumble bag, which I like, but if you don’t, sorting rhinestones by color is oddly soothing. It’s also a great way to occupy a squirrely kid for an hour or two. This bag runs for $15 online, but if you use one of their 40% coupons it runs less than $10. Ten bucks for a pound of happy is a good deal.

** Note on Tacky Glue. I don’t know why anyone bothers to use any other kind of glue. Just don’t. Tacky glue is THICK. And it holds stuff. And it dries clear overnight. Rhinestones deserve a firm glue. They deserve it!

***Note on White/Gold sharpies. There are a lot of good paint pens on the market, but to write on a gourd it will need to have a felt tip or the nib will get gooked up writing over the textured surface, especially if you purchase the gourd and it’s oiled. No water-based ink is going to stick. Sharpies are the best/cheapest/most effective.

***Note on gold glitter sparkle paint. I’m insane for the Scribbles brand of gold glitter puff paint. Actually, I shouldn’t call it puff paint because it doesn’t puff. It dries flat, but, the density of the glitter is much higher than other brands. You’ll find very similar glitter paints/glues in any given craft store, but the Scribbles packs a lot more punch. I use it on lot’s of projects just as tiny little dots like putting tinsel on a Christmas tree. It adds an extra layer of depth and sparkle. And it’s cheap, so you know I love it.

I like to snake a line of the gold glitter all over the surface like a snail trail or something (see wet blobs above). You’d think they’d be glittery enough without it, but no, they really need that extra punch. Trust me. 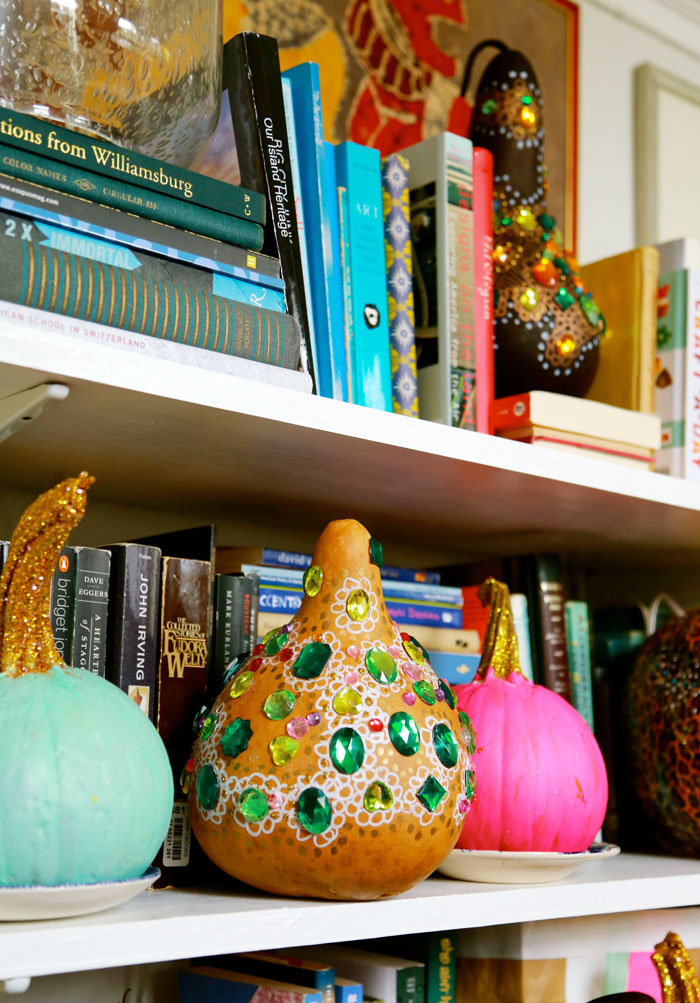 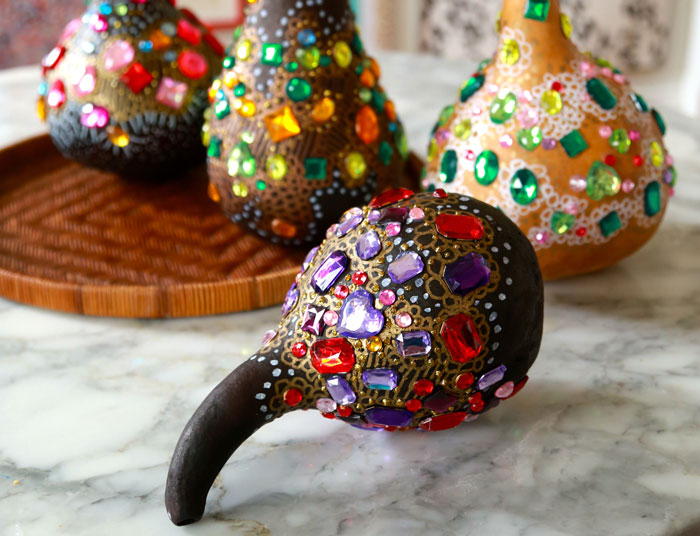 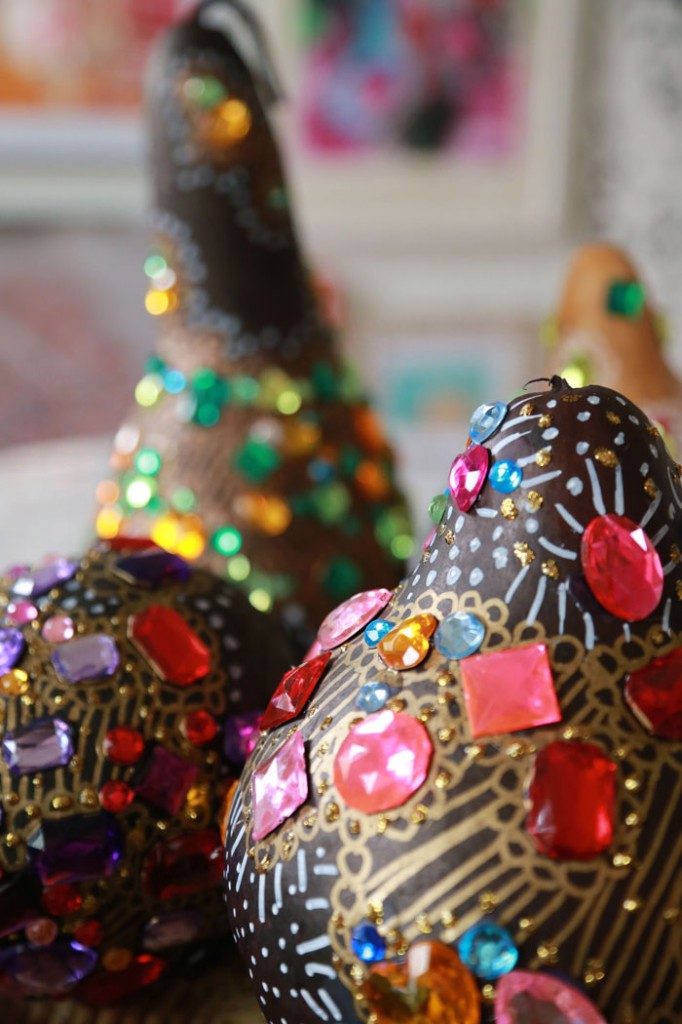 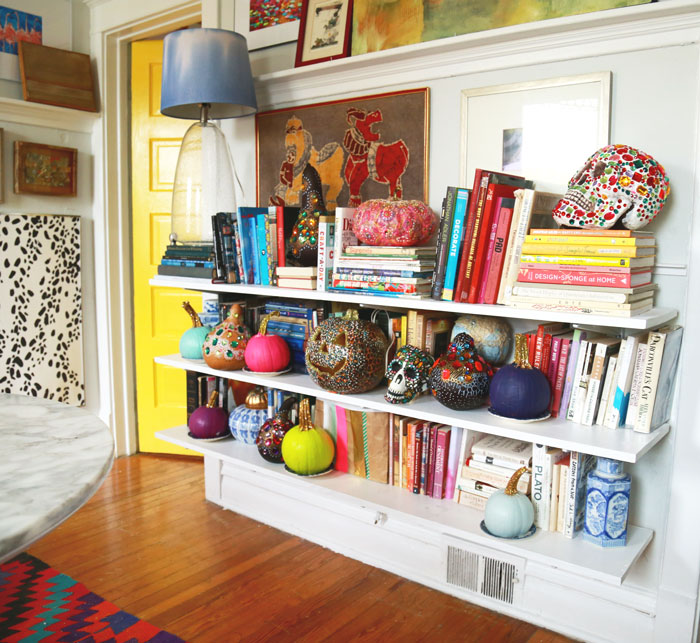 Note the giant rhinestone sugar skull on the right. I found an awesome new secret indigent on that one. Stay tuned.